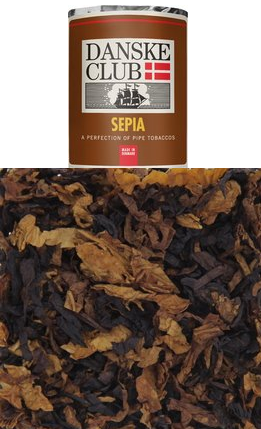 The mixture Danske Club Sepia is blended from mature, orange Virginia, sweet fermented black cavendish and refined with a very bright Virginia tobacco from the Highlands of Brazil. The mixture is distinguished with a taste of creamy caramel underlined by notes of vanilla and sweet orange.

Notes: Formerly known as "Caramel" and re-named to "Sepia" due to EU regulations.

In Germany this is a typical over the counter product sold even at smaller shops that offer only a few, mostly cheap pipe tobaccos. I had bought this once when I had run out of pipe weed in the middle of nowhere and didn't want to resolve to Mac Baren's Mixture, because I had a sweet tooth. A bad decision.

The tin note is actually quite pleasant like sniffing a box of toffee. The caramel topping is overwhelming with maybe a whiff of vanilla. I can't smell any orange that's supposed to be in there.

Filling and lighting your pipe is quite easy with this broad cut.

Unfortunately the taste doesn't live up to the scent. It's extremely mild, or to put it more bluntly flat, albeit somewhat sweetish. Especially during the first half of the bowl it's almost like puffing steam. It's not until the second half that you get some rather harsh tobacco taste and indisdinct flavoring. The tobacco burns down evenly and fast to some dark greying ash.

The room note is unobtrusive and sweet.

I won't buy this one again. If I feel like a caramel flavored tobacco, I'll turn to Peterson's Sweet Killarney.

Boo, hiss! I was bamboozled by the claim of Caramel. I had a friend in Germany send me several blends I can't seem to find in the USA and Danske Club Caramel was one of them. This was a light and airy blend that tasted of burnt coffee and bitterness from top to bottom. A little bitey as well. Not much true tobacco flavor and again, I never tasted Caramel.

It is way to light... You cannot taste really much here... neither flavoured nor tobacco...

Drank water during that night. Was a little bit cold and foggy...

Smell after opening the pouch 50g: Oh my God, this tobacco was drawn by a chemical tank sauces? That was my first thought when I opened the pouch. Well, the smell of an intrusive increase in the nose reminds very much of a haystack, which was previously dipped in caramel sauce. It smells sweetly strong, chemically by caramel, sugar, hay, and orange. To be honest, not a natural smell delicious, not really.

Consistency of tobacco: The tobacco comes in rather dark picture and presented properly, as all mixtures of Danske Club. The tobacco is not too wet nor too dry, just right. It can be super easy to bring into the pipe and prepared a fine. The tobacco is dominated by the Black Cavendish, the unique taste of this mixture is carrier. The Virginia flakes, which are available, one hardly notices.

Smoke properties: The Glutkissen did ignite easily. The tobacco itself is burning evenly. The quality of tobacco is surprisingly good. . For beginners, it is also suitable because it requires little attention. As the whistle I recommend a medium to larger filling volume. However, I would smoke it with filters.

Taste: To calm one can say, quite as bad as we thought when we smelled it, it was not. After the first few pulls, the tobacco loses its flavor clear that in addition, no longer remembers running to Caramel. A slight orange flavor but it does come true. It tastes sweet and unfortunately he has a really weird aftertaste, which is disappointing for me personally. So no real enjoyment in my opinion, there are better aromatics.

Conclusion: A very good quality of tobacco that is unfortunately ruined by flavoring. He thus became significantly worse. Pity about the tobacco. I personally find him Danske Club of the worst of it is out of line. Buy it to me again I would not. There are better aromatics.

Bought this one in Germany while spending Christmas there. I guess I was in the mood for something new and even though my expectations to this brand weren't the highest my sweet holiday tooth drew me to the Caramel variant.

Pouch aroma: Insanely candy like. Sweet and soft caramel is the dominant factor, underneath it I find a swirl of chocolate, coconut and orange. No tobacco at all.

Taste: Again, insanely candy like. Top bowl is somewhat clean caramel, just a few notes of chocolate to deepen the smoke. Mid and lower bowl is more interesting with notes of spicy orange. Still no trace of tobacco.

Verdict: If you're a fan of aromatics there are much better places to look (I?d suggest any of W.Ø. Larsen or Paul Olsen's blends). This one is somewhat refreshing due to the orangey notes but that's just about the only positive thing there is to say about it. It's otherwise bland, one-dimensional and too mild to please anyone else than the first time smoker who seeks an overly powerful dose of gooey grandpa- nostalgia.