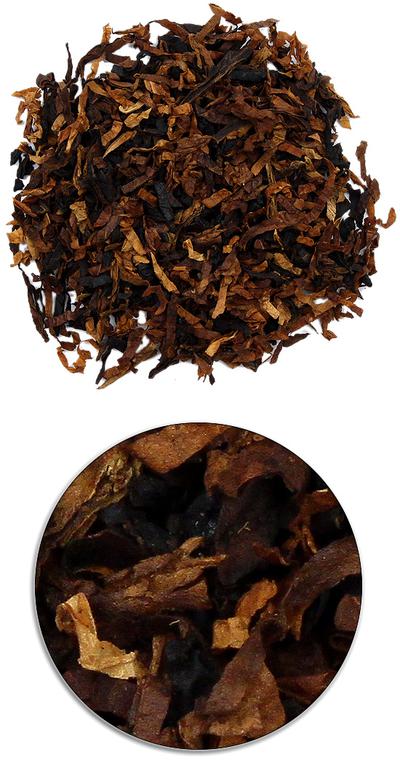 A really full bodied Latakia blend made the traditional way. With the best Virginia grade tobaccos, the finest oriental leaves, dark fired Kentucky and a good pinch of Louisiana Perique and of course a good amount of smooth smoky Latakia. Full flavor, but not overly strong. A pleasant, gentle, and cool smoke.

2014 Update: Opened up a jar that I stashed away 5 years ago, The blend has aged very well, with the Perique behaving itself quite nicely in concert with a mellowed dose of VA and a smoother Latakia flavor. Good stuff!

The previous reviewer referred to this as Cajun Crack, and I think that is a clever (and hilariously accurate) depiction. In this blend, the Perique adds more of a tanginess than a pepperiness (at least to my palate), and is consistent throughout a bowlfull, playing off the Latakia and VA components quite nicely. I would liken it to Bill Bailey's Balkan Blend, in which the Perique is more prominent and nibbles at one's tongue. This is a 'kinder, gentler' Perique-laden Balkan that, along with Bill Bailey's, is one of my favorites. Definitely worth a try.

I kind of think of this as Ghetto Nightcap. The ingredients aren't exactly the same, but it is along the train of thought. What makes it a little slummy tasting is, I think, perique extract, if there is such a thing. Let's pretend there is and, further, let's call it Cajun crack.

I had high hopes for Black Bayou since I like Lancer's slices a lot. (Mars Cigar sells this as Fairmorn's Black Bayou Mist, but my sack just said: Black Bayou-500 grams-Made in Germany-Pipe Tobacco)It had the perfect, slightly dryness for me and lit well. However, the first thing I tasted after Latakia, was a spicy perique like thing that I can only guess is not 'the real deal'. This bothered me for the first few bowls but, you know what? Now that I've gotten the hang of this stuff it's pretty good.

This is pretty much a Latakia/perique like/virginia blend. I don't taste any Kentucky or oriental leaf, though they are listed on the Mars site. I have found that adding one-third of a Hoggarth Dark flake to a big bowl of this is great. The two blends respond to each other much like young lovers. They make each other very creamy.

Did you ever smoke one of those tobaccos that have all the right things going for it, but for some reason it just doesn’t work? That’s the deal with Bayou Mist for me. It has lovely, meaty thick ribbons, the pouch scent is good, and BM, like Sterling Balkan from the same blender, produces a large volume of smoke. But it just seems a bit off the mark for me. I think it comes down to the balance, or lack thereof. The spice note plays too big of a role and overpowers the blend. It doesn’t bite me, and I like blends that have some spice, but in this case it’s too astringent for the blend. It ruins what I think would otherwise be a decent, mild blend.

A very nice blend. Mildly smoky, mildly sweet, and very spicy. Mild in body and medium in flavor. I would rate this higher if it had just a little more body to it, but I still have really enjoyed smoking it. 3+