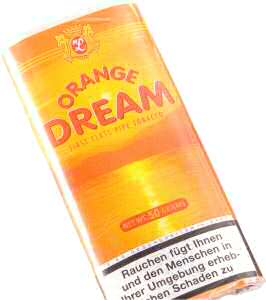 Mild smoke with the distinctive flavour of oranges.

The sugary black cavendish and grassy, citrusy Virginia are greatly sublimated by the strong sweet, lightly tart orange topping. The topping is deep in taste and has no chemical or artificial notes. The strength is around the center of mild to medium. The taste is just past that at its height, and loses a touch of its potency in the last quarter of the experience. The nic-hit is fairly mild. It should be puffed slow or you risk the possibility of bite. Burns a little warm with a mostly consistent flavor. Leaves little moisture in the bowl, and needs an average number of relights. Has a decent, lightly lingering after taste, and pleasant room note. Will ghost a briar. Can be an all day smoke for the veteran aro-smoker.

One of my old reviews I wanted to re-write.

A pleasantry is the pouch-note. At Christmas, when I were a child, I'd scoff until I reached bursting-point orange cream chocolates. The blend smells just like those. Another good point's the tobacco taste: mild and sweet. I suppose the orange flavour isn't all bad, it resembles actual oranges and not just some fondant, fragrant, sweetness, but I find it too strong; way too strong. It bites me hard as well.

Looks more punchy than its actual stength. i picked up the unopened puch after an extreme circus of a day at work . I found it demanded that that it was smoked slow and contemplative . By gum it did settle me down , ligfhting later the taste was more pronounced / improved , take it to an oasis that you use to escape from in your day [ we all have one ] I thinik it will work for you , oh , and use a big chunky pipe .

The pouch has a very strong smell and was looking forward to smoking this but i found it rather sickly the room note is very good but i dont think this one is for me i did have it in a large pipe so might have over done it, tried it in a smaller pipe and it was slightly better one to come back to later will let you know if it gets better with age

i really enjoyed this . the criticism is that it burns too hot and too swiftly so that a pipe doesnt last very long but the taste was nice and i will smoke it in the future . towards the end of the pack you are left with sweepings rather than identifiable tobacco . this tends to be one of the problems of a pouch rather than a tin .

My first experience of a Mclintock blend.

I'd been meaning to try this for ages, but just kept putting it off. Now my 'tobacco stash' is chock full of (Empty) tins I reasoned it was time to try some pouches and loose blends.

The tobacco comes in what seems to be a VERY generous 50g pouch. Bit of a bugger if you don't like it.

I did, fortunately, and this didn't follow the evil Royal Yacht into the undergrowth.

The cut is loose, not too moist, not to dry, just right for a LIGHT load. Yes a Wilbur Smith (a strand by strand packing) here will bring dividends.

I have to say it's the perfect colour for an Autumn smoke, orange and brown with darker shades of leaf indispersed. There are large bits of leaf in here too, which some folks won't like, but I do. I find them ideal for either lining the bowl or spliting and lying on top of the bowl at lighting.

The pouch fragrance will give warning of a strong orange fill. If you don't like aromatics and/or orange flavour then stay well away.

Indeed, like the gorgeous Sunday Fantasy by Radfords, the orange flavour actually comes out in the smoke. This is one of the few tobaccos that actually succeeds in this. It's not a chemical taste like some but a rich ripe taste that makes you want more.

As expected the flavour disappears somewhere towards the bottom of the bowl but nevertheless a satisfying brew.

Oddly, there is no apparent room note, which I found surpring after such a robust smoke.

Time will tell if this tobacco gets sickening after a while (like Sam Gawith's Celtic Talisman). Recommended therefore, but only to aromatics smokers who want a strong flavour every other day. This isn't an all day, every day smoke and you'll need to dedicate a pipe to this blend, probably with salt/alcohol on hand to get rid of the likely ghost afterwards.

As I really enjoy the McLintock Black Cherry blend, I though I would give the Orange Dream a try. On opening the pouch, the aroma is not as strong as other aromatics and has a freshness when smelt. The blend contains a roughly equal mix of light and dark ribbon cut tobacco.

Orange Dream, once lit, is lighter and cooler than I was expecting based on the look of the blend. Again, the orange flavour does not come through in anything like the same way as the Black Cherry does, but has more of a light citrus note through the first half of the bowl. As you reach the end of the bowl there is more of a pleasant woody flavour.

Overall I am really enjoying this aromatic blend.

UPDATE It is well reported that different pipes can make the same tobacco taste different, but I had not experienced it to this degree before. Most of my pipes are straight and it wasn't until recently that I tried this blend one of my aromatic only full bent billiards. In that pipe the casing was much much more pronounced. I am not sure if this is because the bent pipe means that the bowl is closer to your nose (which obviously plays apart in detecting flavours) or because of the pipe itself. This particular pipe tends to "gurgle" a little is smoked too hard. It may be that this makes me smoke this pipe slower than I do others. What ever the reason, the orange flavour came through much stronger and was very pleasant.