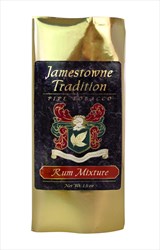 Black Cavendish with a light aroma, flavored with Rum.

Notes: To celebrate the 400th Anniversary of the first English settlement on the North America Continent, and the beginning of the rich tradition of Tobacco in America, Sutliff is proud to introduce the new Premium Pipe Tobacco Brand Jamestowne Tradition.

The black cavendish offers a mild vanilla to the rich sweet rum topping. Though it’s not mentioned in the description, I think a spec or two of burley is present because I get a slight hint of nuts in this blend here and there. I also get a minor grass note here and there, so perhaps a pinch of Virginia is in the mix. There is a little brown flake in the blend, and burley and Virginia would account for it. Has very little nicotine. Needs a light dry time. Burns cool, clean with a very smooth, consistent flavor at a moderate pace. Won't bite. Requires a few relights. Leaves a little moisture in the bowl, but no dottle. Has a nice after taste.

When I ask for RUM in tobacco I want a flavor of rum as an aromatic.This tastes like rubbing alcohol in a pouch. Pure trash.

Yet another gift to my pipe club from Altadis.... Not much to say about this aromatic other than to agree that it is sweet and light. I did find that I could actually taste rum in the smoke. Not sure that was a good thing. It burns fast due to the cut.

I've been pipe and cigar smoking for nearly a year now. I reviewed this blend when I was first starting in my pipe smoking journey, and I liked it alot when I first reviewed it.

I still do! I absolutely love this blend! It produces a nice thick white smoke, and it makes for some really nice smoke rings! Also has a great room note! My wife loves the smell! The only downside, like many cased blends, about half way through a bowl, it starts to gurgle. It's rather mild, especially considering I like medium strength cigars, but a couple of bowls and I'm good! This is my go-to pipe tobacco.

I have tried many different types of pipe tobaccos and I still keep coming back to this one. I've bought quite a few pipes too, and it smokes well in all of them.

It's called "Rum Mixture" and I love high quality rum (liquor) but honestly, it doesn't taste like rum to me. Not quite vanilla either, but it's a nice sweetness that I still think tastes great!

I still give this four stars, like in my original edit, and I really have to recommend it if you like flavored tobaccos.

I liked the sample of this I was sent as a free gift. It was a little too wet though. In general a decent rum aromatic. Never seen it for sale though.

If it was not so goopy I would rate it better.

I am not a huge fan of cased tobaccos but this stuff was excellent. I smoked my first bowl after recieving a sample from Altadis. The first bowl was great but after drying out a bit it became something completely different. The rum is instantly detectable in the casing and the flavor is sweet and rich for a cased tobacco. I had no problem with this burning hot in any of my "cased tobacco" pipes. This is a good blend for anyone to try but first time smokers will find this to be an exceptionally pleasent smoke that will ease thier introduction into the world of pipe smoking.

This is my third sample from their 4-pack sampler. The description above states "black cavendish" only, however I can see different shades of brown mixed in as well as black.

The tin aroma is a pleasant sweetness, although I can't say it smells like rum. Nor does it taste like rum (no matter, I've not tried a rum tobacco yet that actually tastes like rum....maybe it burns off thus altering the rum taste). To me it has a very nice chocolate/coffee flavor. It burns very cool for such a moist tobacco; does produce a small amount of gurgle about halfway down the bowl. Light in the nicotine department.

All in all, it's a well rounded smoke. I'll give it 3-stars.

This black Cavendish tobacco is well balanced and smokes fairly smooth. I will say that this is one of the better rum mixtures I have tried. It does have all of the typical issues associated with aromatics, but it does offer a great rum flavor and a decent tobacco flavor as well. It behaves well and does not bite. Overall a good tobacco for the money.