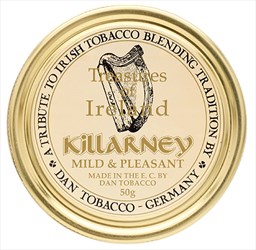 A tribute to Irish tobacco blending tradition by Dan Tobacco - Germany. A mixture of Virginia and Oriental tobaccos with a hint of perique.

Notes: NOTE: this is a Dan Tobacco blend; Treasures of Ireland is a series, not a brand. Mod.

I ordered a sample of this when I was getting into Oriental blends. As a Va/Per fan and having made very good experiences with the other Treasures of Ireland blends I thought I'd give it a go.

I was quite surprised when the tobacco arrived and I stuck my nose into the baggie. I smelled....well..nothing! Really just a hint of sweetness, no other scents! That doesn't have to be a bad thing, as blends that have only a mild scent are very natural in smoke most of the times.

The intriguing appearance of this ribbon-cut offers colors ranging from orange, yellow-golden to beige. It comes rather dry and is perfectly conditioned and smokeable right away.

On first light I perceived a slightly honey-ish sweetness, that quickly got extended by a very herbal-dry and mildly sour Oriental aroma. The flavor-profile builds up as you progress and gets accompanied by a lightly nutty quality. The Virginias really only give slight (honey) sweetness, and are like mentioned before tart and lemony, with a bit of bready aroma to it as I perceive it. Oriental leaf is restrained, but noticeable throughout the smoke. If I hadn't knew I would't really have guessed there's Perique in this blend, as there is only a hint of fruitiness that's lurking in the back. Decent spice which harmonizes well with the tartness of the Virginias.

Contrary to the inconspicuous unburned aroma this blend gives quite a lot of aromas to detect and enjoy. Has All-Day-Smoke abilities, as it's rather mild to medium in strenght and medium+ in flavours. Never overwhelming, yet never boring. Very suitable for Oriental-beginners to give a insight how Oriental leaf will taste, as it's not a Oriental-Powerhouse that will overwhelm a Oriental-newbie.

3.5/4 stars - not the most sophisticated and complex blend out there, but a solid blend with enough Oriental leaf in it to make its presence known. Really not a feast of flavours, but tasteful enough to keep one satisfyied.

OK, so I like what Dan Tobacco do with VA and Perique (and recently, more and more, Orientals). So I ordered a tin and am about to finish it with one last pipeful as I am typing.

My first impression on opening the tin was, well, VA. Broad cut leaf, golden colour, slight citrus note out of the tin. The cut lends itself to the wider bowls. As with all VAs, smoke slowly to enjoy properly. The taste is sweet as expected from a VA, with the Perique noticeably giving the blend more body. The Orientals I can't really make out, but they may well be in there.

The room note is as would be expected -- typical VA. Killarney burns quietly and slowly (if not overpuffed), with little variety throughout the bowl. I am reminded more than a little of a non-flake variety of ToI Limerick, by the way.

Overall, a good blend for the VA lover.

Mostly tan colored chunks that look like C&D made it and a deep aroma of Virginia and orientals. This came very dry in the tin, which is preferable for Virginias, but I wouldn't have minded trying a bowl of it with more moisture. Granted, dry Virginias smoke better than wet ones but this one may have performed better with a little more moisture than it had.

The Virginias here provided almost no sweetness but instead had a tart, lemony flavor. Almost sour. The orientals may have contributed to that sourness but they made themselves known more for a lightly spicy flavor that added to the immense depth this blend contained. But I was surprised to find an Irish-style blend with this much lack of sweetness. This was even less sweet than C&D's Briar Fox, if that provides any basis for comparison to the reader. This was good as it was, but it needed something. I smoked a bowl with a pinch of McClellands 40th anniversary and got an improvement. Ditto with some very dried out black Cavendish. Clearly, I prefer the sweeter side of the Virginia spectrum most of the time. If you prefer a more dry taste with more wood and earth, this might be one to try.

I got a couple of tins of this by mistake, but the situation was quickly rectified and I ended up getting some stuff for free on my next order. DanPipe is good like that. But anyway, this incident lead to the tins of Killarney being put away and all but forgotten until I stumbled upon them when looking for a change of pace in the cellar recently.

So when the lid came off I discovered a sweet and sugary tin note. Maybe a tiny hint of vanilla topping here. I've been known to be wrong before on occasion, but the vanilla thing I get here seems like a signature thing for DTM to me.

The mixture of ribbons and shorter broad cuts are quite dry to the touch, which prompted a quick relocation to a jar. Packs and lights easily. First half and char is very mild and sweet, orientals shows themselves now and then and I notice them mainly as a touch of herbaceous, sweet spice. Not a lot, but enough that I notice they're there.

And, well, that's about it really. It's smooth- predominately VA- sailing straight to the heel of the pipe. As others have mentioned, there's not a lot of variety or complexity on offer here, but enough taste throughout to keep it interesting for the duration of the smoke. Goes quite well along with the morning coffee, or tea during the course of a day.

As for the perique, can't detect any what so ever, but if DTM says it's there, maybe there are a few smidgeons of it that I'm not picking up on.

Room note is discreet and non-lingering. I'm putting it down as pleasant to tolerable, I'm not picking up on much at all one way or the other, but it's not completely unnoticeable.

I think I'll leave it at that. I don't really have much to add to what's been said before about this one. Give it a go. Works nice for me as a change of pace and is probably mild enough to be an all-day thing if that's what you're after.

I posted a review on this yesterday, but to tell the truth it was a rushed job; I opened it by mistake and I got flustered! So, I made this my 'Wake Up' smoke for today, that way I could savour a few bowls and re-post.

A coarser ribbon than a lot, good moisture, and a medium brown. Lighting Killarney's good, and the initial flavour's a little sharper than the rest of the bowl, there's a slight citrus note present. The remainder of a bowl tastes a little rustic, and quite well balanced: the Perique isn't too caustic, the Orientals aren't too sour, and the Virginias are have a woodiness to them. There's also bit of a nuttiness present in the smoke. On the low side Killarney can bite, this reduces the rating by a star!

I don't 'dislike' the room-note as such, and the nicotine's mild to medium.

Killarney? If it weren't for the bite I highly recommend it but that reduces it by a star.

Update I don't remember this tobacco so I can't update the review too much, now that I have experienced many more blends and know what I like and what I don't. I do remember that this tobacco didn't do too much for me, but I imagine, if I found this tobacco again, I might have a different reaction to it. If I come by it again I will re-sample and re-review. For now, it wasn't a tobacco that stood out....I'll leave it for now at 2 two stars.

Previous Review This tobacco was ok. It had a sweet but earthy odor to it. It was decent to smoke but wasn't anything to write home about. Not really much tongue bite to note. It wasn't extremely flavorful though and seems like a tobacco I'll go to when I have nothing else to smoke.

Too many other tobaccos out there that are much more interesting.

this is going to be one of my go-to tobaccos, but it's not very easy to find it even at specialized tobacconists. I don't know whether the ToI product line is going to be discontinued, sure it has not encountered great success in Italy...

I have just ended a more recent tin (while I'm still cellaring a couple five years old or even more), and my previous review is substantially confirmed. Basically Killarney is a short-ribbon-cut-Virginia with small parts of Orientals and just a pinch of Perique. Would also say that the strength doesn't actually reach the medium-to-strong grade, and I'm feeling very confortable with as an all-day smoke. I have also found some similarities to Peterson's Irish Oak and so good using them in rotation.

Packed in small round tin like the others of the same family. Label of light cream colour with the usual celtic harp. It also describes the tobacco as "mild and pleasant". At the tin opening it smells natural tobacco on the light side; difficult to detect the Perique at the beginning, but with time an acetic note says that it's there. Cut is short-length/medium width ribbon, humidity is good for immediate smoke, doesn't needs drying and doesn't become dry so quick. Combustion is good, two matches are enough, it burns quite dry until the bottom, no wet goopy at all. Strength starts from mild to medium and develops to medium to strong through the bowl. Flavour is natural tobacco with a particular cigarish note which I would be helped to understand if it's the Perique's role or there's some Kentucky instead of the oriental the distributor's pamphlet declares to enter in the mix. For this reason it is not an all-day smoke. No tongue biting on condition you sip it quietly. Good product indeed, I recommend it! PS: Sometimes it makes me think to a luxury version of Trinciato Italia: would any italian reviewer check my opinion ?