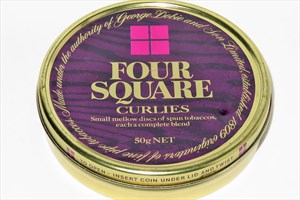 Small mellow discs of spun tobacco each a complete blend.

The original Curlies had a depth of flavor that was hard to beat, with rich, ripe fine shag Virginia ribbon wrapped around a center of heavily fermented pure 100% Louisiana Perique. The later Danish version was good, but the original had a depth to the Virginia that could not be matched. If you locate an older, original Made in Great Britain tin, you are going to be treated with a taste sensation that was like a little slice of Heaven!

This review is from a sample given to me from a tin produced in England rather than Denmark. This mixture is a Virginia/Perique blend similar to Three Nuns. My sample looked relatively dry compared to Three Nuns but that may have been due to the age of the tobacco and/or the length of time the tin had been open, rather than the production process. Like Three Nuns, the tobacco is cut into discs (hence Curlies), ~1/2 inch in diameter. The tobacco is probably cased because although it looked dry, it felt somewhat sticky and can become wet if smoked too fast. The first half of the bowl the sweetness of the Virginias and the tartness of the Perique blend together well producing a tasty smoke. The bottom half of the bowl brings out the tartness of the Perique more but not so much as to overwhelm the flavor of the Virginia. As stated earlier, it can run wet if smoked too fast, so it should be smoked slowly. The aroma had the spicy sweetness found in a good Virginia mixture along with a malty undertone.

What a shame that Four Square has been discontinuated!

Fortunate to have acquired a little cache of the Made in England / Great Britain iterations of this blend- I rank it as one of the all time best VaPers I've had the pleasure to smoke. Of course, it all has been well aged by now and the depth of flavor of the two principle ingredients is luxurious. Sweet and plum stewed. I may have to smoke the pipes themselves when I run out of the tobacco. If you can find a tin, you won't be disappointed. 5 stars!

Lucked into a tin of the English production of this spun disc VaPer, very dark in color (my tin wasn't marked with a date) and a rich and fruity tin nose. The tobacco was still very moist and required drying time, although I smoked the first bowl at tin moisture.

A very flavorful VaPer, with a mild but rich flavor, low nicotine and a very calm disposition. This was about as easy to smoke as any tobacco could be, yet it had a kind of stout flavor that belied its smoothness. No "bite" to it, and by bite I mean heavy bursts of flavor with an edge. No edges here. The edges are what separated this one from the old Cope's Escudo, and I preferred that one as a result. Think of the fizz in a cola as "edge". But if one were a heavy smoker and wanted something easier to take, this would be the one. The fruitiness of the perique came with just a spot of spiciness and sass and the Virginias were pleasantly tangy and sweet with, again, just a touch of extra color. I'm not sure what age has done to this one as I recall smoking a single tin of this years ago but not being overly impressed. But this tin is impressive.

I mourn the passing of this great tobacco, and have yet to find anything comparable on the market today. If you have an opportunity to try this, take it! Highly recommended!

A high quality, spun disks of VA and Oriental bakkies. I suspect there could have been some Périque, but maybe it was just the fact that this was my first try with more natural bakkies. I certainly flipped when I saw the roll cakes, I thought it was really cool. The smell, if my memory doesn't fail me, was of pure tobacco, slightly spicy -thus, the suspicion of Périque, but no! I understand today that it must be the oriental. While I think of it, the new Davidoff Flake Medallions reminds me, without the Black CA though, of Four Square Original...

So, I enjoyed breaking the cakes, filling in the pipe and smoking it. But I remember it was then on the strong side. Normal, my first venture into natural bakkies.

If Four Square is still around, you want to give this one a try.