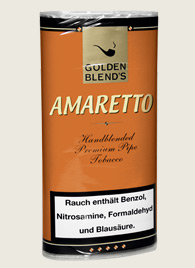 Burley and Virginia Tobaccos with an Amaretto flavor.

Notes: Due to EU regulations this is now known as "No.3".

I had similar experience as StevieB. She had branches and sticks in her. Do Golden Blends have inspectors?

But I got less taste than StevieB. The first smoke she gave amaretto, citrus and cream notes. But I smoke later and got bland experience. Don’t know if it was her or tired tongue.

But she gave good nic hit job. One smoke satisfy me for long time.

She bit my tongue but her bite was delayed reaction. Bite started to hurt after I finish her.

Aside from a few negatives I actually find this a pleasant smoke. The first low point to jump out to me is the mix is a little twiggy, there are one or two quite brittle strands of tobacco that need removing. The second negative is moistness, or rather lack of moistness, it's too dry making the brittle twigs even brittler! On to some positives now! Firstly the aroma, I find the amaretto comes across very well and is quite intriguing.

The flavour from the smoke has the same quality, the nutty amaretto is of a strong enough quantity to be identified with ease. The two tobaccos are a touch masked by the amaretto, the casing is a little too heavy to enable me to separate the flavours of weed. Nicotine is medium to strong, it's a pleasing level that will suit both types of smoker, those who smoke just for taste and also those smoking for N. Due to the dryness this tends to burn too quickly, just as I've settled with my pipe the tobacco's gone! Sadly there is another problem that presents itself after some voracious puffing, tongue bite. Unless gently sipped this can be problematic in that area! The room note I find good. It isn't as nutty as the flavour but there is a definite amaretto attribute there.

For taste alone I would score this four stars but taking the whole package into consideration it can only have two.

Occasionally, I get the opportunity to travel into Birmingham, England, to visit my 'local' tobacconist of note and grab a few decent ales in the local establishments, under the guise of serious shopping with the missus. I'm usually confined to web orders as far as pipe tobacco goes, so I use the opportunity to pluck a few items that pique my interest, in the comfort of seeing them firsthand.

Having succeeded in getting more or less what I came for (a few aromatics to break in a new Big Ben I'm devoting to the cause - as a change of pace following a couple of months with more serious English blends), I doubled back to procure a pouch of this Amaretto blend that had caught my eye as something I'd not seen online.

As pouches/tins go, the design really only has the word "Amaretto" going for it, because it's god-awful. It comes across as a cheaply made tobacco, but first impressions were surprisingly favourable, with a bold, Almond-Amaretto scent and a colourful rubbed mixture of darker Burleys and brighter Virginias to arrest the senses. Indeed, the pouch notes are quick to inform us that they use "genuine Italian Amaretto" as a topping. It's about as faithful as an aromatic tobacco can come.

The mixture very light and it's difficult to pack it too densely. A false lighting was easy, but the first mouthful was pretty bland with a cigarette-like quality and I was ready to be disappointed. Then it seemed to get interesting, when fully aroused. That bold Amaretto flavour from the pouch becomes a lot milder, making this quite a gentle smoke. The Virginia's keep it light, and every now and again you get a nice shot of steeped Burley, which makes it interesting. Get halfway through the bowl and this becomes less of an Amaretto and more of a sweet, toasted sugar, which is rather pleasing. The latter is a lot more noticeable should you need to re- light your pipe. The room note is equally as pleasing, and unlike drinking a real Amaretto, when you reach the point where it can become way too sickly, this actually holds the balance rather well.

I suppose you really have to like Amaretto as a flavour, before you purchase this, but there's enough here for someone who prefers an all-round mildly sweet smoke that's not heavily cased and that doesn't burn to a stickly mess. If you're more into natural tobaccos, then steer well clear. Likewise, if you are expecting a potent almond flavour and a rich aromatic, you may well be disappointed. However, if you're into aromatics and like a nice dessert-worthy 'baccy, aside a sweet, milky coffee or a liquer, then this will more than suffice. Perfect for those who like Dutch blends like Troost Aromatic Cavendish, methinks.

Love it or hate it, you be the judge. I, for one, was pleasantly surprised -especially given such a mild tobacco.

This tobacco has left me baffled as to where to really place it within these reviews, as it appears to fall under two brands. Purchased in the UK, my pouch is a German blend, made by Pöschl Tabak and under license from Golden Blend Tobacco Co. Inc. If the tasting notes on the website are correct, then I can only deduce that it's a re-badged version of the Exclusiv brand of the same name. Herein, I'll also be posting under the Exclusiv Amaretto review section. Presently, I'm unable to cross- reference this European Golden Blend against the versions sold in the US.

Have never tried Amaretto liqueur, so can't say what this tobacco is like in comparison.

As with another reviewer, my eye was caught by the package, which I'd never seen before. I found it on a foray to nearby Canterbury, Kent. There's a tobacconist/sweetshop round the corner from the cathedral, and he stocks a good variety of tinned and pouched tobaccos.

Having had about 8 pipefuls (in the course of 18 hours), the only slight drawback seems to be that there's a hidden strength in this tobacco that affects the back of my throat a bit. But it's not a huge problem. Some very strong tobaccos can be unsmokeable because of this effect, but in this case it's not too bad. The effect soon wears off.

I'm very pleased indeed with this mixture, and at this early stage I reckon it's a winner, definitely one to be purchased a lot in the future.

Reading the other reviews I've noticed all the familiar experiences of smoking this stuff. I can't add anything more insightful or necessary. But I'll add my own opinion for an attempt; If you like and appreciate the taste of tobacco, I won't recommend this to you.

Now let me get this straight. Firstly for a long while now I have smoked loose American style tobaccos's (well somebody has to!) and I have enjoyed trying a variety of flavours. One thing that bugs me almost constantly about pipe tobacco is (like cigars) the fact that what is mild to one is strong to another. So I have tried many many 'mild' tobaccos and come to one conclusion. Many many many brands will claim to be mild when they simply are not. And thats a flat fact. I will go as far as to say the only truely mild pipe tobacco I have ever tried is Mellow Virginia and that one suffers a bit within the ratings as a result. So after spending a long time with the loose American types I have come away with noting but a burn tounge and a weeze :) But I love the flavour, so what's the answer? Golden Blends Amaretto? Well it's certainl;y mild and it does sort of taste of Ameretto however it really is not the real deal. The stuff is so light in consitency that when packed it burns very quickly. The flavour is great first smoke but becomes very boring after a few pipes full. No this one is nit for me.

I bought this blend thinking that Amaretto would taste amazing.Well...no. This blend is bland and has no aroma.The room note as observed by myself and others agree that it just smoke.I was disappointed. First light was great,it had a great smell and had a little flavor, kinda tobacco-esqe with a hint of Amaretto vanilla. After the first light it went down hill like the American stock market in 1929. 0 out of 4 rating.