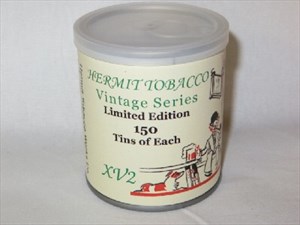 XV2 Extra Vintage 2... is rich in vintage Virginias and both latakias. A bold blend, yet cool with plenty of blue smoke.

I found two tins of XVV in my collection That were long forgotten. I'm guessing I bought them in late 2006 early 2007. I decided to try one.

Tin note...deep woods,rich soil, slightly chocolate. Latakia. Slight cigar notes detected. Both tins had bulged a bit..... Tobacco.... Typical pressed Hermit tobacco canned in a Krumble kake. Proper storage, temperature, and factory pressing resulted in slow but steady fermentation. Hence the tin bulge. I was not able to find any list of constituent tobaccos with the exception of "Latakia". Syrian? Cyprian? Both? My thoughts in a bit. The tobacco was placed in a mason jar for a month prior to smoking. The blend was nice and moist. I'd say just about perfect in the tin and ready to smoke after being decanted. The smoke.....I dropped chunks into my pipe and gently pressed. The tobacco burned well from the start. This is a complex blend, deep, Latakia forward, slightly sweet. The blend is well balanced and the Latakia is not overpowering. Rich stewed plums, salted nuts, incense greet the top bowl. I did detect a creamy, cola Latakia taste. This leads me to think a Syrian Latakia was used in the blend. The mid bowl produced a nice tobacco and slight marshmallow, sweet raisin taste with the Latakia ever present. The flavor further deepened towards the end. Im guessing a complex blend of Virginias and Latakia . I did not detect orientals. This blend is close in terms of taste profile to McClelland's Pre-2009 Jubilee. However, much more stout. I wish I would have bought more when I had the chance. Only 150 tins were produced.

This is a sensational krumble kake with strength and loads of unrelenting flavor. If you enjoy heady doses of Latakia but want some with enough strength to match the flavor, this is the one!