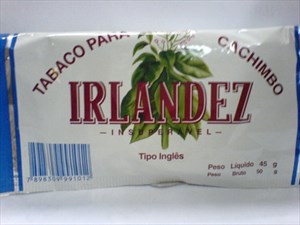 Probably the most traditional and well known Brazilian drugstore tobacco house. The IRLANDEZ "family" used to has on its mixture a balanced blend of burley, golden and medium Brazilian Virginia tobaccos. Similar to: https://www.tobaccoreviews.com/blend/12675/tabacos-cisne-branco-finamore-ltda-chocolate-alpino

Notes: Produced since 1937, is one of the more Antique Brazilian Blends. Now is produced by "Tabacos Cisne Branco Finamore", new name of the antique "Tabacos Wilder Finamore".

Being a pipe smoker in Brazil, where it's hard to find most of the great range of pipe tobaccos existing in the world, one always end up trying some of this, avaiable in many places, at affordable cost. It's our "drugstore" tobacco for exelence. In my opinion, it stays in middle term between aromatic and non-aromatic tobacco. Definitly, it's not an english blend, but also not an full aromatic. The tin aroma is very sweet and it comes with right humidity. Easy to pack and light,it stays lit to the end of the bowl, with no bite at all, sometimes some harshness at the end, if you're not carefull. Better if smoked in a medium size bowl. An all-day smoke, honest, wich main characteristic being regularity.

Cavendish, Cavendish everywhere... I am not a big fan of Cavendish, as I feel it gives a stronger tongue bite even if the tobacco smokes cool (and it does smoke very cool).

However, this is a very nice mixture of Virginia and Cavendish, however as the precedent review states, this is not an English mixture. I bought this tobacco when I was on holidays in Brazil, and as I said it is very mild and quite impressive because I am not a big fan of aromatics and Cavendish tobacco.

This tobacco smokes cool and with relatively little tongue bite. The cut is slightly thicker than your regular ribbon cut and burns a bit unevenly. It tastes a bit like honey and vanilla and is very sweet.

Recommended for novice pipe smokers and fans of cool aromatics and Cavendish.

It is NOT an English type tobacco. But this doesn't mean it is not pleasant.

If you get it in proper moist level, it doesn't bite, it has a good flavor, nobody complained about its smell, so I guess the room note is ok.

Yes, it is a drugstore tobacco, but I say it's one of the best around. And it's cheap! =D

This is a mild golden Virginia/Burley Mixture, with some golden cavendish tobaccos. It haves a liquor and Vanilla taste and flavour. Is a good tobacco for begginers, and in Brazil is the more easy to find, the main "Drugstore" Blend. However it is so-called "Tipo Ingles" (English Type), this is an uncertain info, since the true "English Mixtures" contains Latakia tobaccos and this not. However, this is an Aromatic Tobacco. The words "Tipo Ingles", "English Type" is because this is one of the more antique Blends in Brazil, and when it begins to be made, nearly 80 years ago, Brasil only had acess to aromatic mixtures that were imported from England. As many other Brazilian Tobaccos, from many companies, this is sold in a good aluminized paper pouch, that preserves the flavour of the tobacco.

"English Class" stands the 200g tin. But this is hardly an English Mixture. It's an aromatic tobacco, may be the oldest in production in Brazil. Its a very good tobacco. The foundation is a light yellow Virginia, supplemented by some Burley and Cavendish. It's topped with some kid of syrup that is a family secret for generations: the Finamore's blend tobaccos in Brazil since early 1900. I can fell chocolate, run and herbs. It comes fresh but not humid, but it do not light easy. Once lighted it remains burning very well, without any bite. For near 30 years of smoking it I can bear my witness for its quality, which justify its popularity in Brazil and, although not a superb blend, you know what you get from it. But its harshness at the end of the bowl is what keeps me from rating it three stars.

It's been 10 years since I bought my first pipe, back in Brazil, and had my first bowl of Irlandez. Oh well! those were good times. It's really hard to find good tobacco there and I think many among us, Brazilians pipesmokers, have had their first puffs with Finamore tobaccos. So even if nowadays Irlandez woudn't be my first choice I can say that it is not a bad blend.

It comes in pouches and when you open up you can smell chocollate and vanilla. The cut is more like shaggy then ribbon. It packs well and it's easy to light, despite the moisture.

The smoke is consistent through the bowl, very sweet and hot. No much complexity here. The after smoke leaves a nice room note. And I would say that this tobaccos leaves a ghost in the pipe that remains for a long long time.

Irlandez is a very, very tradicional blend in Brazil. My great grandfather and my grandfather smoked it and so do I, but not for tradition itself. This blend has a lot of personality in it, as the Virginia taste is a bit herbal and the hints of brandy tends to leave the impression of a fruity blend, which is not. Indeed, it is mildly flavored but has a lot of presence when exhaled, heavy sometimes in a sour, milky caramel note, that might be interpreted as a "stinky" note commonly found in milk flavored Goods. Its cut is fine very short ribbons, with bits varying in shape and color, generally golden and fresh but not moist. To me it is very pleasant, I would call it a half natural - half aromatic blend, made from good quality Virginias. Does not bite if well accomodated and gently puffed. It is not spectacular or amazing, but it has so much personality in it that it reserves respect. It's neutral enough to be smoked while drinking a decent smoked Leaf tea.

Unfortuanelly not a good pipe tobacco. Calling it English Mixture is a heresy. There is no latakia here whatsoever and hrdly some decn virginia as well. The base of this blend is a coarse cut burley topped by a casing that resembles matured condensed milk. Burns a bit hot tooo... Cannot recommend this.

poor, flat, and a bit stinky for some noses. Finamore has some nice tobaccos, specially to be used in home-made blends, but this specific one is pretty bad, made me feel like i was smoking not a pipe, but a cigarette... maybe i was in a bad luck and bought a specially dry and poor pouch, but i doubt so.

I just could'nt like this blend, the flavor was a bit too strong and it made me a little dizzy after smoking a bowl. I guess I don't like brazilian tobacco, since I also tried Finamore's extra mild cavendish and I still can't finish that one either (also too strong for my aromatic tastes). Not my kind of thing, but I'm sure that many may still find it a great mix, it's up to your tastes, so I'm not gonna say it's a bad quality tobacco, I just did'nt like it.

The tobacco until is beautiful, I removed it from the pouch and put it in an airtight jar, it has a neutral smell of smoke, but an extremely mild flavor, that with each passing day faded. Its cut is finely chopped, not enough to be a ribbon. The flavor is quite shallow, for either aromatic tobacco or for a neutral tobacco, therefore, leaves no aftertaste. Tends to warm the pipe but not enough to bite, just that those who are smoking "pilote" well and later you will see, not bite nor will warm the pipe...

Until then my favorite national tobacco, besides the moment in which I am smoking also I like the aroma in which it sends me slightly to the honey. In the matter of burning, taste in the mouth and aroma in the environment, I honestly have nothing to complain about.

A really traditional drugstore brand. Has to exist a reason to face this tobacco for such many years, i cannot say i like it, either say that i don´t like. Considering its price and how easy is to find, become a option to fill your pipe with some smokable thing. IMO most of their blends tastes similar, the main flavour still the same, sometimes with or without a chocolate nuance, alcohol/liquor/floral, depend on the package. the pack by itself can be a problem, very similar in colours among the options so for the begginers might be hard to understand what u are buying. Apart from that, it has a really good room note, the smell in the pack seems floral/cocoa with some alcoholic like wisky or even cachaça (why not). Nicotine level is disappointing, it can burns hot and leaves ghosting in the pipe, easy to fill and keep it lit. Nothing special in it, i prefer the "chocolate alpino" version.