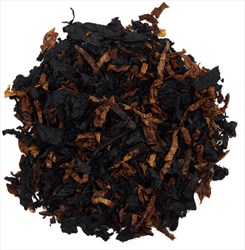 The golden cavendish offers some grass, citrus, and a touch of honey. The black cavendish has a little vanilla. The burley is nutty. The topping is a little vanilla and a drop of caramel. Hardly much tobacco taste, though that isn't a complaint. The flavor is fairly pleasant and comfortably smooth and creamy, but doesn't stand out much as the vanilla topping lacks richness. I didn't find it sticky like some of the other reviewers did, just slightly moist. Burns at a reasonable pace, clean and cool with a consistent flavor. Needs few relights and leaves little dampness in the bowl. Has very little nicotine. Won't bite or get harsh. An all day smoke.

A very coarse mixture heavier on the black Cavendish than golden. It's a bit too moist but that's congruent with the pouch-note: clearly aromatic. In all fairness, though, it's no damper than I like a blend to be: tacky but smokeable.

This is one of those blends where the smoke's produced in big clouds-the downside is you'll want a window open! The flavour's more of a sweeter vanilla aromatic kind, as well as the vanilla there's honey and caramel; the honey emanating from the golden Cavendish, and the caramel from a topping. I get a rugged, nuttiness from the Burley, and the black Cav, of coarse, has the usual viscid quality. B27 burns cool and bite free.

Black & Golden Cavendish? It's a nice enough blend but a bit mediocre for any higher than two stars:

Looking for a light to medium sweet blend and was very underwhelmed. This has an awful flavor, not sweet in the least, and just plain unenjoyable. There were no redeeming qualities and I doubt I'll even be able to give it away.

I knew this stuff was probably going to be trouble when I loaded my bowl. The tobacco was very soft and moist. My fingers were also a little sticky after loading, which was a sign of things to come.

1st light: Tobacco started sizzling. This stuff sounded like bacon frying in a pan. Not good.

This tobacco produces a lot of smoke, which I liked somewhat. The room aroma is very nice, but a little cloying. Taste and smell is definitely creamy vanilla with a little nuttiness. In this case, the tobacco flavor description is accurate. I found the taste to be way too cloying and creamy. I might as well have been smoking vanilla custard or pudding.

One good thing about this tobacco is that it's remarkably gentle. I had no bite or heat, even during re-lights.

Well, 1/2 a bowl was about all I could take. As expected, the bottom half of my bowl was coated in that thick, disgusting sludge that's reminiscent of roofing tar, and that I oh-so-hate! Needless to say, the rest of my 2oz. baggy of this garbage tobacco will be disposed of immediately.

I also received this as a free sample but it's not so bad that they couldn't sell it as an aromatic. I don't buy or typically enjoy them but did finish this pouch. Very moist and soft and packing had to be done carfeully. Smoked without bite but also without a hint of tobacco taste; just the vanilla casing. Towards the bottom of the bowl, it started popping from the condensation and origianl mositure content. Guess this is why I don't smoke aromatics but if you do, this is better that those I've had from the drug stores.

From the files of "I'll Smoke Anything As Long As It's Free", comes this plastic pouched ditty from Altadis that came to me free with a tobacco order. A sniff inside the pouch gave me the typical aromatic burst of really nice aroma. As the tobacco came very moist, I dried it out until it stopped leaving so much nasty residue on my fingers.

The flavor was vanilla and caramel, which was quite nice. It also gave off a hefty volume of smoke, for those who find that important. Dried out, it didn't leave quite so much goo in the bottom of the pipe, and smoking it in a meerschaum helped as well. The best part of this blend is that the flavoring is maintained further down the bowl than most inexpensive aromatics I've smoked. Generally, a decent aromatic goes bitter when the casing burns off about halfway down the bowl. This lasted to at least the 3/4 mark. Nice! I'd have to say that I prefer this one to Lane's 1Q or BCA. Recommended for aromatic lovers that don't concern themselves with complexity and want a very nice room note. I smoked 5 bowls of this and will save the rest for those rare times I really crave something extra sweet.

Later downgraded due to it not holding its flavor over time, even when sealed. This became dirty and foul after just six months. I wonder if the excessive PG caused this. Two weak stars.

B27 Cavendish … Just like the description on the pouch, black Cavendish with a few strands of gold, and of course the ever popular vanilla topping. My sample was somewhat moist, so I dyed it to the point where the pieces would not stick together when squeezed. Flavor wise, IMO it's far more interesting than their B20 Cavendish, and maintains a mild degree of sweetness longer. Still not my kind of tobacco, but I'll have no trouble finishing the pouch, that's for sure. It is bite free, dry, and mild enough to be an all day smoke, but does require some puffing control, because at a faster pace this stuff can hinge on the harsh side. For those that love mild aromatic tobaccos, I would only somewhat recommend a try, because IMO this stuff offers nothing new, to this already overly crowded genre.

A "crowd pleaser" for sure - but for those looking for a more satisfying "tobacco" experience, look elsewhere. I received a free pouch of this with a recent tobacco/pipe order. The pouch aroma was similar, but not the same, as Captain Black White and Mac Baren's 7 Seas Regular; a nice vanilla presence without being too cloying. Relatively moist as American aromatics go, but there was no difficulty loading or lighting this offering. I was happy that the chemical presence, or taste, found in so many American aromatics was at a minimum, but present none the less. It smoked relatively dry and without bite, but there was no real tobacco taste to make me want to revisit. All being said, I do give it a 3 star recommendation as it was not at all bad. It certainly has a pleasing room note, and I believe it would be a fine offering for a new pipe smoker to use in getting accustomed to the pleasant past time of pipe smoking.

This blend is one of my favorites. More black than gold, it seems. But, the vanilla casing definitely comes through. Real crowd pleaser, everyone makes comments on how good it smells. I don?t find it sweet at all. Smoke is almost too strong, yet, no tongue-bite. Very smooth! Burns great. Easily a one match bowl! Smokes wet, if packed too tight. It tends to hold and picks up moisture, if stored improperly. I dry it out a bit if it seems too moist, before smoking.

I tried a pouch of this not too long ago. My sample wasn't very wet at all. It had a fluffy texture, but was still moist. It burns well, smells nice, and is very sweet and creamy. I smoke this sort of thing in a cob or clay. That way I don't have to worry about moisture problems. Pack this stuff loosely, otherwise, it will get more wet than it needs to. I didn't love it, as it is very sweet, and cloying. But if you are looking for an inexpensive, sweet cased cavendish, you might like it.