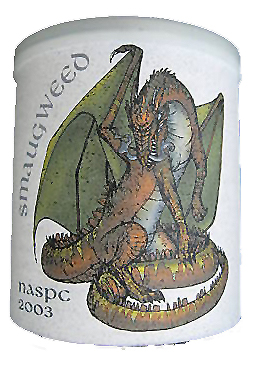 Smaugweed is a full english mixture, dark with Latakia form the mountains of Cyprus, sweetened by fine Virginia tobaccos from the new world, and spiced with exotic Oriental tobaccos.

The famous NASPC Smaugweed (developed and tinned by GL Pease) was really fun to smoke. Since it is a "Limited Edition" sort of tobacco, I think Greg was generous in portioning out the exceptional Latakia in this weed.

This tobacco is dry in the tin, was easy to pack and smoked wonderfully cool.

A little trepidation is felt when popping open a limited edition tin blended by hip micro blender Gregory L. Pease. Behind the enticing graphics, and between the lines of Tolkien talk, we find that Smaugweed is billed as a classic English composed of Virginias, Latakia from Cyprus and Orientals. It should be noted that in Pease?s web site Smaugweed is also described as a ?monstrous Latakia Blend[.],? this got my hopes up.

Upon opening the tin, I was struck by the overall light color of the tobaccos, mostly brown leaves here, the first hint that there was not as much Latakia as advertised... But what an interesting tin aroma. Freshly baked cake, quite unexpected in an English blend, much less a purportedly classic one. Certainly Smaugweed has none of the leather austerity, which has its charm, and which wafts up upon opening of a genuine "Classic English" pipe tobacco blend, like London Mixture, for example.

After such an unexpected introduction, the smoke itself was a bit of a letdown: it was bland.

Perhaps it is too well balanced: for between the Latakia and the Virginias neither won. The components of the blend seemed to cancel each other out. Not really smoky at all -- Does this Dragon have a cold? -- this blends lacks a personality, something that would make it stand out.

The Orientals too feel almost invisible. It was reminiscent of another purported Latakia monster, ?Raven?s Wing.? (Wings which must have been clipped or shortened at some point.)

Basically, at the end of the smoke I felt like the woman in the Wendy?s commercials of old: ?where?s the beef??

Now I know what is coming: the reflexive mantra of the would be avant-guarde of tobacco connaisseurs: "it will benefit from aging!" In this case, I highly doubt it, since age will not help the latakia deficiency in this blend -- au contraire, it will undescore it!

I went through 2 tins (1/2% of the entire production!) which I smoked in a variety of pipes, so bemused was I by Smaugweed's docility.

To be sure, its a interesting blend if only because of its tin arome, just don't go broke trying to get a tin --because (unless you are a speculator) its just not worth it.