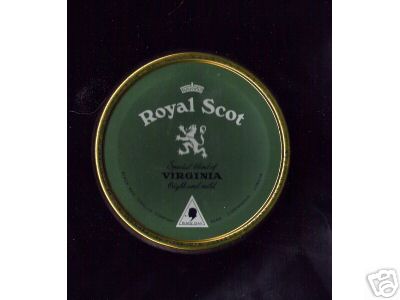 Royal Scot was a companion blend to Dunbar many moons ago, and used a syrup to dressing in its Virginia flakes that gave the blend, to me, a flavor of pancakes. Unlike the mighty Dunbar, Royal Scot's flavor was indeed as flat as a pancake with no depth to the Virginia. The top dressing was off putting to me, but even though I smoked my tin (well, two bowls of it), back in the early 1990s, it was still well aged at that time and perhaps the casing had died. Glad this blend did.

Notes: The Dougster got his sample from me, and I feel the dessicated state of the sample does not do justice to what the blend is like in a freshly opened tin; perhaps I did him a disservice. This is a blend I had to smoke several tins of before I really began to understand it. At first I saw it simply as a mild and semi-aromatic mixture, but with time I began to appreciate the extremely high quality of the underlying stoved Virginia leaf. It smokes well in all my pipes, but I like it best in my Meerschaum calabash. Of course it is no longer made, not for many, many years. Good luck finding a tin!

Comparisons: Like Murray's Erinmore Flake, but mellow and without the heavy topping. Like Cornell & Diehl's Briar Fox but lacking the complexity, monochromatic. Like Dunhill's Dark Flake but less potent.

Bottom Line: Well it's not made any more, anyway. For those who a seeking a full, stoved Virginia , with a well-integrated structure and a mildly aromatic topping, this might have been the one that got away.

My single tin of Royal Scot was quite old as the two dollar price tag was still on the tin. The tin note promises the possibility of a wonderfully aged, lightly topped Virginia. Unfortunately Royal Scot simply doesn’t deliver. The overall subtle flavor of a quality aged Virginia lacks both the sweetness and/or hay that should be expected in a blend this well aged. The light flavoring, which I can’t put my finger on, is unable to compensate for the lack of taste. I wouldn’t call Royal Scot a horrible tobacco, just boring.

Age When Smoked: Over 20 years

I recently got a sample of this. It looked pretty old and somewhat dried out, so I added a few drops of water and let it be for a couple days.

It looks like small black woody slivers, and the pouch aroma is somewhat reminiscent of molasses.

This seems to be topped with something, although its not overly strong, maybe some scotch and sugar? Upon lighting it seems to tend to bite, although it smooths out a bit as the bowl progresses. No virginia type flavors seem to be in evidence.

When I asked my wife about the room note, she said, "It smells like something is burning, but not tobacco."

My sample doesn't seem overly flavorfull but it looked pretty old and dried out, and it was just in a ziploc baggie. Its not a bad smoke but it doesn't seem particularly outstanding either. It might be worth picking up a dusty old tin if you see one laying around, it seems to be basically a mild semi-aromatic broken flake.