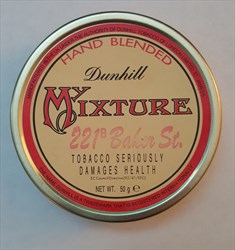 A mild to medium strength mixture with a quizzical twist to it that only the formidable Sherlock Holmes could fathom out.

The bold Virginias are grassy with some hay, along with a burst of citrus, a little dark fruit, honey and earth. The Virginias seem to have a little age on them before tinning as I noticed a light fermentation. The very nutty, light molasses, earthy, woody burley play an important secondary role. The dark fired Kentucky offers some wood, smoke, nuts, and a minor spice note in the background. The toppings include plum, raisins, a hint of tonquin, fruit (apricot), and has a slight alcohol hit. The toppings are in the same family as the Dunhill’s Royal Yacht and Three Year Matured blends; in between both regarding strength and effect as well as having a little flavor variation by comparison to the aforementioned Dunhill blends. The strength is a step over the medium level, while the taste falls just shy of that. The nic-hit is just past medium. Won’t bite or get harsh. Burns at a moderate pace, cool and clean with a smooth, very consistent flavor, though it and the nicotine level rises a little as you head for the finish. Easily burns to ash, requires few relights, and leaves just a tad dampness in the bowl. Has a pleasantly lingering after taste and room note. Not an all day smoke, but it is repeatable.

If I had a steady supply of this, I would smoke it daily. The description was about as non-descript as one might find. I received a menu of tobaccos from the store in London (I think this is the only place you can get this blend) and just ordered somewhat randomly. I was a little more than intrigued when I popped the tin. I had never smelled any tobacco like this and was eager to try it. I smoked it in a favorite Dunhill (why not, right?) It was love at first whiff. To this day I still cannot begin to tell you what the flavoring is. It reminds me of vanilla or cookie dough but not so strong as to suggest anything other then a good Virginia tobacco. About 2/3s of the way down, the strength really starts to kick in. The flavor remains good. It is a clean burning blend and does not leave any residue in the pipe. If you like Virginias and want a change of pace over your regular blend, this one comes recommended.

Whenever I am asked “what is your favorite tobacco”, I always respond “Dunhill 221B Baker Street”! This is an outstanding blend that I fell in love with all those years ago. It is a fine cut, somewhere between a shag and a ribbon. It has a very light topping on it, the likes of which I could not identify with absolute certainty. Something like a white chocolate perhaps with an added cordial. That said, this is not an aromatic by any means, it is a Virginia powerhouse to be sure. It burns beautifully and cleanly, with a nice off white ash in the end. This is not a blend to be trifled with however. If you are a fast puffer (and are smoking on an empty stomach) you will anger the pipe gods and suffer the wrath of the spinning room! Gentle and slow is the way to enjoy this one, and enjoy you will. Sweet, creamy and flavorful with a wonderful room note will reward you if you take your time with it. Sadly out of production now but I have had some luck finding tins here and there. In the spirit of the great detective, “the game is afoot” to find more!

I got this tobacco in my first order from the Dunhill store in London, and I tried it immediately in an Ashton XXX Pebble Shell half-bent... forgetting that "mild" in Dunhill's vocabulary is quite a deceiving word! As a matter of fact, while this tobacco is rather mild/medium in taste, it packs a terrifying nicotine punch, that forced me to put down the pipe for a while. Opening the tin, you are welcomed by a strong sweet and penetrating aroma: visually and olfactorily, this seems like a close cousin of Royal Yacht with some hints of what at first seems like an alcoholic/fruity/honeyish topping, similar to (but much less intrusive than) Three Years Matured Virginia. It burns well and slow if treated correctly (careful not to smoke it too hot or you'll lose flavor), and has a nice delicately sweet flavor with piquant overtones (just like the Yacht, though at times reminds me of University Flake... in a better way!). At the end it can become a bit bitey and/or bitter, and leaves a sweetish and quite nauseating room note. Dunhill doesn't reveal the composition of this tobacco, but I can almost safely put the finger on red and lemon Virginias with some burley. It is not a bad tobacco, but like Royal Yacht it is an acquired taste: personally I like it, but I can't smoke it anymore because it makes my legs shake and stomach turn even in a small pipe and with a relaxed puffing pace... and usually I smoke strong tobaccos! Probably a matter of body chemistry... If you like potent stuff or you are a fan of Royal Yacht (but I seem to detect some similarities with Hamborger Veermaster too), give it a try by all means, though!

This is another fine Dunhill my mixture blend, on the sweet side this time round. To the naked eye this looks quite drawing, a neat looking ribbon cut, with lots of dark nuances and a bit of gold here and there. The nose is nothing in particular, hinting just what the tin label suggests a va/bur. The smoke is steady, not needing many relights, of an earthy, slightly grassy taste with a complex nutty added element. Overall it does have a persistent sweetness, not over the top, not mute, but just enough to make the nuts and earth pleasurable. I for one fail to get a citrus taste out of it, as the earthy and nutty component seem to be on the forefront. Here and there I do get a hint of fruit, although not a very obvious component at first. I do get the feeling there is a topping involved here, as this blend somehow leaves the same lingering scent on my mustache and leaves a similar after taste in my mouth just like Royal Yacht. Mind you though there is hardly if any plum in there, unlike Royal Yacht. I guess since RY is my favorite, I may be seeing a resemblance that others may not find, but that's my taste of it non the less. The nic hit is medium, certainly not a back to back bowl kind of blend (I have tried it, and was indeed a bit too much). It may be an all day smoke for the accustomed smoker, but there are certainly other burley blends out there that I would repeat more often, and that's not because the blend is not good (gosh it's awesome) but because my expectation of a burley has less of an oomph.

One of the saddest aspects of the degraded world of pipe tobaccos is that this blend is no longer produced. If you asked me the single greatest blend ever made Id say Balkan Sobranie black label. But 221B Baker street is a close second. Then perhaps the OLD 3 Nuns. But Baker Street was sublime. The virginias were a mixture of different kinds, and the Burley was the same though mostly Kentucky I think. The topping was not as heavy as some suggest. At least my memory suggests it wasnt - but in any event it was a heavenly smoke. The nic hit was a tad past medium and yet never overwhelmed the taste of the tobacco. The tin note was heaven too. I remember opening those old tins and always smiling. Like meeting an old friend. Alas...no more.