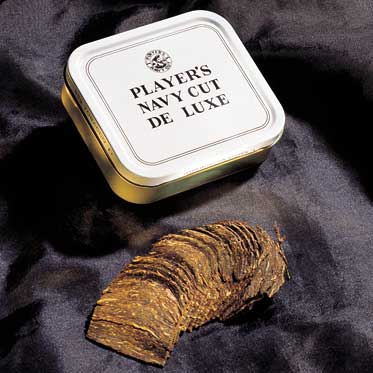 The Virginias were dark and light, offering some sweet citrus and dark fruit along with a little grass and some earth. At times I also got a minor spice note from the dark Virginia. The rolls were easy to break apart, and lightly moist. Burned rather well, required a few relights, but not many. A cool, clean consistent, fairly smooth smoke that left just a little dampness in the bottom of the bowl as it easily burned to ash. Didn't bite and had a mild nic-hit. Not a complex blend, but it was an easy all day tobacco. Two and a half stars.

Although the flavor was spine tingling, I like a little more gunpowder in my musket. This one tasted very similar to Capstan Mild although it was easier to rub out. Also, my tin contained rolls rather than flakes.

The Virginia seemed enhanced by some sort of flavoring. It was so discreet that I might be wrong. It may just be a super naturally sweet Virginia. Whatever it was, it was darned good!

This was, in its heyday, one of my regular tobacco's. A mild Virginia, classically English in flavour and a regular everyday pipe filler. My father-in-law of blessed memory, who was in the Navy during WW2 used to add whisky or rum to this and use it as a sunday lunchtime smoke, very pleasant it was too. Him and me in the front room after the sunday roast with a glass of armangac, some of his wonderful alcoholic tobacco in our pipes, and tales of his mates in the Navy. Happy days :-)

Anyway, enough of me wandering on...it was a decent smoke this. Shame the original has passed into history...just like the old fella.

A Friend brought me a tin of Player's Navy Cut De Luxe from his trip to Copenhagen. Tin looks like one in the pic above but tobacco inside was three stacks of rolled cut cake slices almost identical to Dunhill's De Luxe Navy Rolls, also made by Orlik. I'm still a novice with VAs, but enjoying them more frequently these days.

The tin aroma upon opening is subtle and mildly sweet, not unlike ripe mandarin. I don't think there's any topping . Colors vary from medium browns to darker shades. Coins rub out easily and the moisture content is just about right, but since I tend to achieve better smokes and less bite with drier virginias, I let it sit for extra half an hour.

This lights up without any problems and stays lit well. The first third can be a little bitey for a fast puffer and maybe just a bit harsh, but it tones down nicely when approaching mid bowl. The taste gets more full and also nicotine is making itself known. The last third of the bowl is my favorite on this, more robust taste while slightly sweet. Tasty and satisfying!

This is good quality virginia tobacco that also DGTs well. I will have to get more of this. Recommended.

At the time I tried this blend, it was unavailable in the U.S. It was brought into the local B&M by someone who had been in Europe and I was fortunate enough to smoke a bowl courtesy of pipe maker Don Fuhr who had aquired some of it.

Personally, I found it to be a pleasant smoke but nothing remarkable. It was accompanied by the standard bite of most virginias, but smoked slowly it provided minimal discomfort.

It's worth trying if you get the opportunity, but not worth going out of your way for. There are better virginia flakes available.