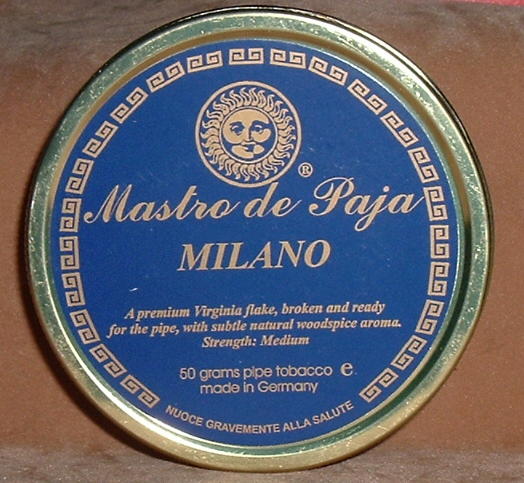 All of the Mastro de Paja blends were produced by K&K up through the mid 2000's and typically of that German blending house, the Virginia acquired makes for a good smoke. There is some sort of natural flavoring added to the leaf in Milano that was not sweet (similar to milder Lakeland additives), that enhanced the presentation. This is a blend made for those who do not particularly enjoy naturally sweet Virginia, but prefer a more straight forward taste. My tin was quite aged, so there was a smoothness and depth to the leaf that I really enjoyed.

Just finished a full tin of this. One thing right off the bat is that the back label says "Premium Virginia and Perique." I cannot find anyone saying this actually has Perique...so there you go.

This is a nice, mild smoke. The topping is very light...I can't quite say exactly what it reminds me of but it is subtle. Enough to make it stand out on its own a bit. Virginias are quite mild but solid. No changes throughout the bowl.It does take a few lights to get going, has a very smooth..almost unremarkable retrohale. Pretty light in body. Burns to a white ash.

I went through this tin in about 2 weeks or so. Enjoyable smoke but not sure I would seek it out again. If you come across a tin it is worth a try just for that subtle topping.

Age When Smoked: About 2 years of age.

Milano is a Virginia blend with a flavoring added to give it a “ subtle natural woodspice aroma.” The addition gives the tobacco a very pleasant room aroma which brings compliments rather than scorn, and for that reason the blend has promise. The tobacco is a rubbed-out flake of golds and browns with a nice, sweet aroma, and comes at a good moisture level. The charring light is sweet, smooth, and clean. Once lit, the flavor is basically Virginia, and reminds me somehow of cigarettes. It isn't as sweet as many Virginias, and the flavor seems somehow lower, though stronger, than many. Mid-bowl and later, the flavor increases a bit, but never really goes anywhere special. The woodsy added flavor is somewhat spicy, but can't really be determined by this smoker. The presence of it doesn't really add anything. The tobacco stays lit well, isn't a huge threat for tongue bite, but never really goes anywhere. In the end, I think I'd prefer a pack of Pepperidge Farms Milano cookies. There are a lot of really exceptional Virginia blends on the market, and to me too many to spend much time smoking one that is average, which is how I'd classify this blend.

This is my first review on tobacco reviews but I think I've chosen a great one! What can I say,this is a hit with me as an all day smoke. Mild but flavorful. It won't have your head spinning with nicotine, but won't choke you out while racking the yard either! I like it!!

By gum, I can't help it. I just plain like this tobacco. While I have most often held that the British and, to a lesser extent, the Americans should be the only ones with a license to produce a Virginia blend, with Milano I have found that the Germans have proven themselves.

I have little idea of what was meant by 'woodspice aroma' and, to tell the truth, I was a bit wary. Upon lighting this pale, rubbed out flake however, I was treated to a naturally sweet and bready flavor with a slight hint of nut. It tasted like unto any number of other blonde Virginias I have had and I really could not determine how this supposed casing influenced things at all. The smell was absolutely innocuous as well, so I can't imagine any complaints or even comments while smoking this. I will also say that the Neo-Classical design of label won me over as well.

As my evaluation of tobaccos from respected pipe makers continued, I tried this German blend sold under the Mastro name. This is a fully rubbed out blend with a perfect moisture content that results in a effortless, dry smoke. However, to my taste, the claimed 'woodspice' is more than subtle and is present from start to finish with little variation in intensity. Some might enjoy this taste but I prefer a naturally sweeter VA flake for my steady smokes.