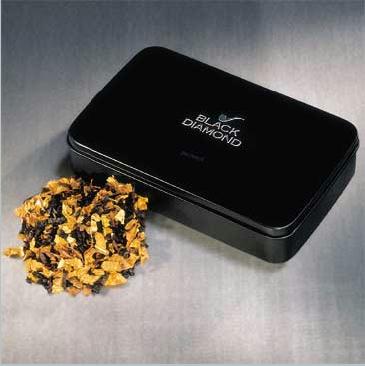 A mix of burley, Virginia, Oriental and a little black cavendish added.

Notes: As of 2011, this blend has been transferred to the W.O. Larsen brand of STS; the tobacco is unchanged though.

I guess the problem with most smokers of the pipe has to do with a background in cigarettes or cigar; the quest for nicotine punch rather than the search for a tobacco whose quality expresses itself far beyond the matters of strength.

Black Diamond is one among many aromatic tobaccos that are light in nicotine content - an easy smoke, by all means - but also gifted with the finest tobacco leafs and the product of a very crafty mixture. Unlike many may believe, Black Diamond is closer to a gourmet tobacco smoke rather than a everyday smoke (where the likes of MacBaren Mixture or St. Bruno, for instance, would easily fit). This is a tobacco manufactured for special occasions. There is also much to be discerned beyond the usual Danish Black Cavendish mixture, namely the broad cut orientals which are sure to produce a subtle but heavenly contrast.

From the moment I opened this tin I don't ever want it to end.

I am an aromatics lover! I believe that Orlik produces only fine blends, just like Stanwell. This one is a decent aromatic in the classic Danish style but nothing so special. No moisture, burns to the end, no tongue bites, smooth burning but "flat" enough. Brings in mind the classic Stanwell blends but with no special aroma. I recommend it for the new beginner or the "English tobacco" smoker who wishes to experiment with aromatics without ill effects. Give it a try!

I knew nothing about this tobacco when I bought it, and did so in a state of some desperation - at the airport, as the only potentially dignified choice among the ubiquitous cherry atrocities perpetrated by Borkum Riff.

As mentioned by Alguhan the packaging is unacceptable. You will likely find its contents dried to brushwood when you open the pouch. The manufacturers would be well advised to take a cue from the packaging Peterson use for their annual reserves.

After humidifying the tobacco for a couple of days I found its taste sharp, flat, and highly unpleasant to smoke in the Middle Eastern climate - I was in the Galilee, where I immediately got hold of a mysterious, unlabelled pouch of pure, pitch-black Latakia, which I smoked instead.

I mention this because I abandoned the BD completely until now, where I'm stuck in the snow and have run out of everything else. So I grabbed a big, bent billard for the coolest possible smoke and defiantly packed it with my once more bone-dry BD. What can I say? In this climate just before Christmas I'm suddenly enjoying the elaborately flavoured BD rather a lot. Its taste is no longer flat and sharp but full, round and golden.

I still wouldn't recommend this to anyone because apparently it has to be smoked aged, dried and in arctic conditions to be truly wonderful, but apparently it can be enjoyed, after all.

One of the best aromatic tobaccos I've tried. It has a cool, sweet smoke, with a mild taste. Remains dry and it is easy to smoke.

In spite of the elegant, black tin, the tobacco is protected in a low quality plastic bag. The tin is not suitable for keeping the tobacco. It will loose its humidity in a couple of hours. So after opening the pack keep your tobacco in a pot. I am not sure about the burley and oriental content. The black cavendish, yes very tangible.

Although I am not a fan of aromatics and this tobacco also overwhelmed me with its flavors, this is a high quality and elegant aromatic tobacco. I couldn't finish the tin, no, not for me. But for sure, the aromatic lovers would enjoy.

When this blend first reached my local tobacconists in the early 1990s, there were two majour reasons for me to avoid it: at the time, there was a fad on for novelty tobaccoes (many with unusual sauces, flavours and toppings) which mostly were just plain garbage, and the "black" in the name reminded me too much of Black Luxury, which I had just left behind.

So I bought a tin anyway. I was surprised by the contents not being pure black Cavendish, and while the tin aroma had a lot of BC in it (and the seemingly unavoidable Vanilla), it was quite a bit fresher than the other "blacks" of the time.

Packing is easy -- the leaf is a square-cut VA with crumbly BC, so just let Sir Isaac Newton do most of the work for you, using your larger bowls -- and BD lights OK; you may have to tamp down and restart a few times at the beginning.

The taste is sweet and very mild, the room aroma almost heavenly. I would recommend this blend to beginners with sensitive tongues.

It would be a nice, mellow, everyday affair if not for the price: this blend is on the upper end of the price scale, and for all its niceness does not have any punch, and if you're used to aromatics or just want to get a tobacco with a little kick, this is not your choice.

If you want something very mild and agreeable, try it.