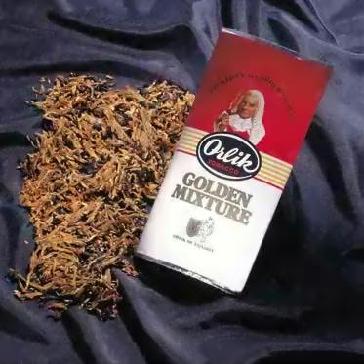 I really like this as an every day smoke. Slightly sweet, great room note, nothing particularly complex, however my sniffer/taster don't always denote many of the nuisances that others write about. I'd recommend this and will look forward to getting more tins.

Age When Smoked: Over 18

Similar Blends: MacBaren Va # 1 but without any bite..

Firstly, I can't quite get my head around why this is listed as being a 'ribbon'; it's blatantly a broken flake with one or two course pieces in there. The mix contains prominently Golden Virginia's and Burley's, there's only a tiny amount of Black Cavendish in there, and I mean a really tiny amount. Upon smelling the blend I'm unsure as to what the 'other/misc' flavourings are; the only extra smell I get is a sort of citrus one. That may be from the Virginia though?

Onto the smoking quality; although it contains a few chunky pieces of broken flake they aren't that big as to require rubbing/breaking, they can be stuffed straight in. It then lights up very easily giving a good burn. Going back onto the subject of other/misc flavours; outside the tobacco taste, the only one I get is a sort of lemon/citrus one; this seems to be more potent in the smoke than in the aroma from the pouch. This is okay at the beginning but becomes a bit unpleasant after awhile. Now the tobacco flavours; I I think the Black Cav' exists in the description only! The prevalent flavour I get is quite a light VaBur one, 'light' being aimed more towards the Burley than the Virginia.

For the first ten minutes this seems a good smoke; a VaBur with an edge? But then, as I said, after awhile the citrusy addition becomes astringent, it's most unpleasant.

There are some very good points to Golden Mixture; it burns well, I like the nicotine amount, it arrives perfectly hydrated, the room note's good and many more. For my palate though, I find the smokes taste isn't nice.

The various cut Virginias are flue cured and offer some citrus, grass and hay, wood, a touch of spice and honey, with acidic, sour and floral notes. I notice a drop or two of orange among the other citrus. In a strong support role is the mildly nutty, earthy, woody, toasty, dry burley, which has very little sweetness. The black cavendish is a background player that adds very little to the mix. The topping is honey-ish with a little citrus, and very light. It doesn’t tone down the tobaccos much at all. The strength and nic-hit are mild, while the taste is a little shy of the center of mild to medium. Won’t bite, and while it isn’t harsh, it isn’t smooth either. Burns a tad warm at a slightly slow pace with a lightly sweet and savory, consistently lackluster flavor that loses a little of that in the last quarter of the experience. Leaves little dampness in the bowl, and needs a a little more than an average number of relights. Has a plain after taste. An all day smoke.

I wouldn't downplay this tobacco. It does have a physical resemblance both to Mac Baren's Scottish Mixture and to Orlik's own Golden Sliced. But that's about it. Flavourwise this is a milder, and slightly sweeter version of Golden Sliced, but, in my opinion, better tasting than Mac Baren's.

It doesn't purport to be a mixture of every possible tobacco. It is essentially a golden Virginia, to which some roasted Burley and black Cavendish (though not the goopy, vanilla cased one) have been added. It actually comes rather dry in the tin and it has a nice citrus aroma. It packs easily (no need to further break apart the broken flake bits), lights immediatlely and has an excellent burning rate.

Room aroma is very Danish. It is a mild smoke, without any bite, and very flavoursome. If it has any added flavourings I honestly can't detect them. This is a very simple Virginia/Burley mixture (at times it reminds me more of Haunted Bookshop than any other tobacco), but with that very special Orlik nounce.

Nothing to write home about, but still a very noble and down to earth smoke. I would highly recommend it to beginners who want to try natural tasting tobaccos with some "sweetness", or to the established pipe smoker who seeks a change of pace on the milder side of the spectrum. Good one!

Age When Smoked: direct from tin.. and aged in pouch 2 weeks.

This is a blend of rubbed out Golden Slices and Orlik Extra Mild Mixture. Nothing new here. See both reviews, combine them and you will have this.

For me this blend is a Golden Slices polluted with Extra mild mixture. If i get bored, i'll buy a pouch and spend the day separating the two blends into each little tin. Yeah right:)

Not seen this is pouch form. This was my second tin ordered from the brilliantly heroic Dan Pipe.

The taste is not particularly memorable, but this is a staple everyday blend, which if supply was better, I'd have in my cellar at all times as a fall-back. I've had worse and indeed, better. It just doesn't taste of anything much after first light.

Comparisons to to something like Capstan's flake is inevitable, and although this is enjoyable enough, lacks the character of the former.

Pipe Used: All of them (briars)