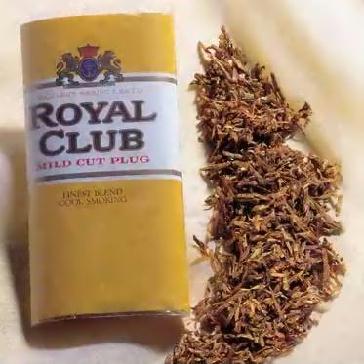 A blend of light and dark Virginias with a touch of burley.

I hadn't much of an expectation for this; I'd not heard of it and it's not exactly been a 'highly reviewed' blend. It should be a hell of a lot more popular; I think it's a top end VaBur.

The contents of the pouch somewhat resemble a broken flake; there's no large 'whole flake' pieces that need rubbing but it's far too course to quantify it as being a simple ribbon cut mix. It's of the expected colour for the ingredients that are included and its moisture's impeccable. So, it's ready to be smoked straight from the pouch. On we go:

To me, it tastes like there's a little more than just a 'touch' of Burley in the smoke; by no means is it a nut fest, but it's far too flavoursome to only have a pinch in there; it doesn't taste only of grass! I wouldn't say it's strong, nor full tasting, but it has quite a lot of character to it. The enjoyment of this is embellished by zero tongue bite from the medium temperature smoke. I don't get a lot of nicotine from this; I wouldn't say it's too mild but it's definitely not got a lot!

I'm glad I ignored the lack of popularity with Royal Club; it's a smashing blend that's a 'must try' for VaBur lovers!

Bet you have tried Mac Barens Virginia No.1 eh? And what happened to your tongue? For me it was like dipping it into molten solder-wire.

Then i tried this. This is a replica of VN1 but without the bite!! That is; it bites like most pure VA's but not half as much as the Mac Baren version. The flavour is the same honey-caramel as in Mac Barens.

People who liked VN1 but had to lay it off because of the burn owe it to themselves to try this little beauty.