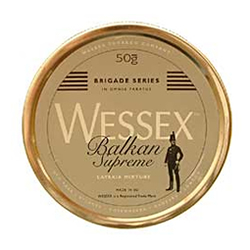 Wessex usually provides me with flavorful offerings. Not a particularly strong "Balkan" style flavor at all and in this one and the presentation looks much bolder than the strength of the blend

The Latakia is in the background, and it was certainly flavorful enough, but the Oriental and Turkish leaf appeared to me to be the leaders as I worked my way through a tin of this middle of the road Balkan style tobacco.

It's light on the Orientals and Turkish, which are dry, slight buttery sweet and sour with a touch of wood. The Cyprian latakia is not as smoky or woody sweet as I find in other Balkans. There's no real flair to the taste. Has a mild nic-hit. Won't bite or get harsh. Burns at a moderate pace, cool and clean with a lackluster, consistent flavor. Needs an average number of relights, and leaves little moisture in the bowl. The after taste is short lived. It probably deserves two stars, but that would really be stretching it, so I rate it as a one and half star blend.

Wessex' Brigade Balkan Supreme is an adequate balkan, leaning a little more towards orientals than to latakia. It is a medium ribbon cut that is quite smokeable right as it comes. The tobacco maintains the same flavor all the way down the bowl. The blend does not exhibit much depth of flavor and is fairly monochromatic. I found this to be a little harsh on my throat, but that is not uncommon for me.

One problem with this blend is that it only comes in a 100g size and is a little pricey at $17, so it could be an expensive trial. While I will probably set some of this aside to try again later, I think my pipe club will get the rest of this.

For the Latakia lover in you. I was very unimpressed with the first bowl, and almost was ready to pawn it off on someone then decided to try it again on a different day. The second bowl was defiantly MUCH better. When I first opened the tin it didn't have the best aroma in the world and was VERY wet. The aroma of the tobacco itself is fairly pungent, but once you get it lit and start smoking it develops. You can defiantly taste the Latakia and oriental, not really too sure where the Virginia or turkish went. But if you like the taste of Latakia this the blend for you.

Another Kohlhase & Kopp blend, not very good but nothing to throw away. In this particular case you have a nice oriental content supporting the taste. As expected there's no building up throughout the bowl in the flavour department, quite the opposite: from half bowl down the taste mingles in something messy and indistinguishable. You can find much better blends but at least it's worth its price.

The initial impression of Balkan Supreme was good. I removed the lid to be met by a perfectly hydrated, mid size ribbon, appearing quite even with the colours. Shame I don't find the smoke as appealing.

The description says 'a substantial amount of Latakia' but to my palate it doesn't taste that substantial. The Orientals give a greater quantity of flavour, accompanied by a toastiness. There's very little sweetness; I'd include a touch of Virginia to brighten the profile, if it were down to me. The burn from it's good enough, giving a medium temperature smoke, which doesn't bite.

Okay, it tastes different to your regular balkan, it isn't a smoky Lat-Bomb, but this inimitable quality won't raise the outcome any higher than two stars:

Age When Smoked: Tin not dated, but two month in cellar

Yes, i seem to agree with the general thrust of the reviews here. The aroma out of the pouch is GREAT, but the smoke is quite a bit less that one would have expected or i had hoped for. However, i found it grew on me, and i wound up liking it better than i would have guessed at first blush. How did it wind up with more flavor than in the beginning? I don't know...

I got a very attractive deal from Pipes and Cigars on pound of this. Because it was nicely dry it looked like a pound and a half in the bag when it arrived. It was very smokable, however. None-the-less i think i do like it.

CORN COB pipes (my favorite choice of pipe): A bit sharp or tinny, showing the thinness of or shallowness of flavors

MEERSCHAUM pipes (i have a ton of them/ big, small/ expensive and not): Stronger Flavor, again a bit spiky, to begin with, like the Corn Cob smokes, as would be expected by the amplification that the Corn Plant does with tobacco and as does Meerschaum, too. In the end this is where i found i liked this tobacco.

At first blush, did it match up for me to:

my standard favorite, McClelland's- Frog Morton Across the Pond?

Did i like it in the end, yes. How does That happen?

Then, too, i may be a bit odd in that i smoke Iwan Ries & Co. IRC Kings Oriental because it has a clove topping that seems to help puting more punch into it.

Most everything is a bit on the lightweight side for for me, even when moistened a bit... or a lot.

If anyone here knows of something with a big Latakia Hammer, i am all for finding it... so please mention names i may not yet know.

End Note: I am not unhappy at all with this tobacco. The More I Smoke It the more it seems to be wanting to be my friend. Tobacco can do that for me if it wants to... but then again, you already know i am a bit of an odd duck with a soul of a poet and heart and temperament of a linebacker, right?... ROTFL

Age When Smoked: Fresh from the dealer

Similar Blends: Sort of in the same "English" category as:, Ashton's- "Artisan's Blend; or , Lane Ltd.'s- Crown Achievement; or , Cornell & Diehl's- Pirate Kake; or , Drew Estate's- Meat Pie for me?.