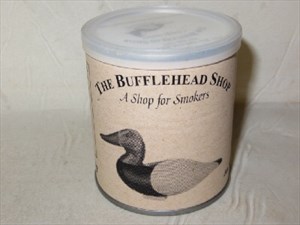 Rich, flavorful; a classic full latakia mixture. A tobacco created for the pipe with exceptionally fine and rare tobaccos. The finest of Greek Cyprian latakia combined with the best Basma variety Oriental tobaccos from Greece and Turkey.

I'm always having to pull out my tobacco notebook when adding reviews involving Bufflehead blends that I've smoked over the years. So many of them have similar names that I get my waterfowl confused. Not Redhead Decoy because I recently popped open a tin that has been in my cellar since 2003. Wow, what a smoke! I know the long aging has been kind to this one as the Virginia and Orientals really shine and the Latakia has completely smoothed out. Rich and very flavorful with musky hints combined with cool and refreshing spice from the Orientals and a little backbone from the Virginia leaf. As fine an English blend as I've had in awhile. I smoked a bowl or two of this every evening until my tin was empty. Now its time to attend the funeral for Redhead Decoy as there is no more.

I had been saving a tin of this and finally opened it the other day. This is a great tobacco. It lights and burns great. The tobacco flavors of this blend are exceptional. The people I work with all found it to be pleasant. This will be one I keep on hand from now on! Five out of Five stars!!

I don't think that Bufflehead makes a bad tobacco, so lets get that out of the way. I am a big fan of Common Teal. But, there are times when Common Teal, which is latered in latakia, makes one a persona non grata in his own home. Redhead Decoy was made for those times. It is a more refined blend, with subtilties that would be pushed out of the way by the latakia in Common Teal. It is a joy for a winter slow smoke. Lights quickly and burns completly to white ash. If you like FMOTT, you will like Redhead Decoy.

1yr. later. Many different tins have been thrown off the UPS truck toward my back door since this original review. Redhead Decoy remains one of my favorite blends. I think it's one of David's best.

2yrs. later. Still one of my favorites. Now I think it is closer to Ashton's Old Dog (which is said to be a McCelland product). But, RD has both FMOTT and OD beat. It is full and very soft with just the right amount of complexity. This is my "go to" Latakia blend now.

I at first confused this with the Redhead bulk from Bufflehead, which is a much different tobacco.

Upon opening the tall 2 ounce tin I noted mostly black tobaccos in a confetti-like cut, with perhaps 10% of the mixture a rubbed-out brown sliced flake. The tin aroma is subdued, with dark dried fruit and smokey overtones. Texture is soft and somewhat moist, and I packed the bowl with a light hand.

From the first puff the overall impression is of smoothness, and that continues to the end of the bowl yielding a fine grey ash with a few charred bits at the bottom. A subtle sweetness starts early and stays consistently throughout the bowl, and the latakia adds its special smokiness without ever overwhelming the other flavors. I let the pipe go out at midbowl and cool; upon relighting, the first puff had a tinge of the bitterness I've experienced in other Latakia blends, but returned with the next puff to its original smoothness.

I can't imagine how I'd improve Redhead Decoy. It has become a favorite.