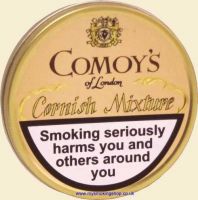 A blend of selected Virginias, quality cavendishes, and a hint of burley. Cinnamon, chocolate and clove give a winter beer taste. On opening the tin you're greeted by an aroma of the raisin and chocolate.

I reviewed this years back but deleted to repost as when I reread it I thought I could do better.

Made up of coarse ribbons, so much so it’s on the cusp of being labelled Broken Flake. The constituents are a mixture of different shades of brown, mostly medium and light but it’s inclusive of one or two darker pieces. The addition of cloves takes the most formidable stance in the unlit aroma.

The smoke: from word go it burns well. To inaugurate a burn requires only a swift touch of the flame, and then to keep a consistent pace requires only the occasional tamp. Another run with the flame isn’t really needed, unless the smoking of a bowl’s impeded, or neglected. The flavour: at first this can seem quite caustic and sharp; the cloves, cinnamon and zesty citrus are responsible for this. But as a bowl burns, a supporting sweetness gains more recognition. This hails from both the toppings and tobaccos. The Burley gives a touch of nutty-molasses and the Virginia Cavendish a honey-sweetness. The chocolate, out of all the added flavourings, is the lightest: it gives a slight creaminess but never any rich/bitter chocolate notes; it’s more like milk chocolate than dark chocolate. Because of the Burley/Kentucky Cornish Mixture has a healthier amount of nicotine compared to the usual vanilla, cherry and coffee aromatics; so, it might not be the ideal aromatic for a beginner. That said, though, it would satiate a more hardened smoker’s lust for aromatic flavour without compromising their nicotine wants! As well as giving an independent burn Cornish Mixture distributes a cool smoke, which remains free from tongue bite for the duration of a smoke. The room-note could be considered both good and bad: not too heavy with actual smoke but rather fragrant.

Comoy’s Cornish Mixture? Slightly unusual but not really one for me. Somewhat recommended:

It's hard to decide what the "noble aroma" here is. In the tin it smells like a stout beer; while smoked it has more of a spice, like clove. I find its elusiveness intriguing, and, at the very least, am thankful that this isn't simply the pipe-smoking equivalent of a clove cigarette.

Cornish Mixture has a definite tendency to bite ... in fact, "burn" is the more accurate word. I smoke it exclusively in a calabash for that reason, and if not for the bite would have given it a high recommendation.

I have no idea what the base tobaccos are. There do seem to be at least two, judging by color. The topping is not exactly light, but it's not heavy-handed either.

This might be a good tobacco for someone looking to get into aromatics, since there's a lot more spiciness than sweetness ... almost like a VA/Perique blend. It certainly appeals to this smoker, to the point of really craving it.

A rich, Cavendished Virginia with perhaps some Kentucky or Burley, mid brown in colour, taht comes in a very classy and elegant tin. This is quality tobacco. On opening the tin, you are greeted by a very special and interesting aroma. It reminded me of cinnamon, with a vague clove essence. When you smoke it, you get the same taste, very subdued and not at all offensive (kind of an unsweetened cinnamon roll).

The tobacco is easy to pack and light, and smoke rather cool. It comes in broken flake, and its moisture degree seems to me all right. I would say this is a light aromatic, very tasty and spicy smoke. It is definitely different to any other aromatic I have tried. Yet you still get plenty of tobacco flavour, very refined and temperate.

If you like Cavendished Virginia, medium strength, with a slight spicy aroma, try this one. I would not smoke it constantly, but as a winter smoke I have really come to enjoy it.

Cornish Mixture is an odd bird. At times it smokes like a straight Va, other times it is more of an aromatic. The topping seems to be fairly unevenly distributed throughout the mixture. I also suspect a bit of Burley lurking in there somewhere.

As Tantric noted, the topping did remind me of clove, and I also thought I caught what could have been cinnamon or possibly even ginger. It seem that every time I tried it, I thought of something different. I never was able to really nail it down, possibly do the aforementioned inconsistency of the topping.

While this was not a cool burning blend, I did manage to get away with my tongue intact ? but just barely. I found it to be a bit rough around the edges. Mine was a few years old when I smoked it. Maybe more age will help.

Kolhase and Kopp present us with another apparently beautifully made tobacco in the form of Comoy?s Cornish Mixture. The tin is luxurious in appearance with lots of nice gold embossed print. And being a fan of things from the western side of Britain it seemed somehow appropriate to try a ?Cornish? tobacco.

The weed itself is a visually appealing homogeneity of light brown ribbon cut, and the aroma from the tin is spicy, like clove ? really delicious smelling. Moisture content was good, and the mixture packs nicely.

Initial light sends up a rather thin stream of hot smoke, but the flavor, sidestream, and room note are really exquisite. One will wait for the smoke to cool. Perhaps on relight after the charring? no. The burn is hot, the smoke, thin and unsatisfying and more puffing won?t improve the density, but will of course increase the heat. Still, the aroma is wonderful. By mid bowl I found myself thinking cool thoughts, imagining the icy wind coming off the Celtic Sea, sweeping across the jagged dark coastline of Cornwall? but it didn?t help. I tell you the person who develops a viable pipeman?s tongue condom will be well remunerated!

The last half of the bowl yields up, for me, a pounding headache. The aroma has turned to that of bitter, cheap, sour burley and the hellish furnace that the pipe has become makes smoking a miserable chore. The only thing that induces me to finish the remaining flavorless soot is the pitiful compulsion to burn out the sop that has accumulated, which mission finally accomplished, the headache subsides in about an hour.

In a stoic attempt to render a just review of this tobacco I played this scenario through the majority of the tin. The result was consistently the same. My fantasy of a pleasant, cozy, subtly aromatic smoke on perhaps, a rainy day in a Cornish pub perched on a craggy shore remains unrealized. Much of pipe smoking is often wrapped up in one?s psychological state? too bad perceptions are so often impinged upon by such harsh realities. Mediocre tobacco covered with a spooky topping. Don the tongue condom and proceed with caution.

This is a real change of pace for me, I rarely smoke Cavendish aromatics, but this was a Christmas present... And actually rather a nice one, particularly as the sweetly spiced topping seems so seasonal!

The tin is full of golden and tan ribbons with a fair bit of pressed stuff mixed in, it's not too wet or sticky, in fact moisture content seems just right. The aroma in the tin is sweet, with spice and dried fruit wafting up - very nice! It's easy to pack and light, and generally quite a low maintenance smoke. Flavour is mild throughout, moderately sweet on the tongue but much more sweetness is appreciated in the sidestream. A spicy, sugary effect like mulled ale.

It does burn rather hot, but doesn't do the steaming tongue bite thing which so many other sticky Cavendish confections are prone to. It also has a satisfactory dose of nicotine, and I appreciated this fully when I smoked it in a large German porcelain...

I'm sure the aromatic fans will enjoy this, and I've made my way through this tin rather quickly, so maybe others will also enjoy it as a change of pace.

As a Cornishman, I had to try this, and I wanted to like it (though, really, I don't know what's supposed to be 'Cornish' about it). I don't hate it, but there are two respects in which it doesn't really suit me. For one thing, I found the flavouring too mannered and complicated, and too much inclined to swamp the natural tobacco flavours. For another, I found that it burnt fast and hot. It will suit aromatic smokers, I guess; but I prefer something more natural and, I suppose, more 'blue-collar'. Try it if you like the more heavily cased Gawith & Hoggarth blends (Ennerdale; Grasmere); but take it slowly: sip or scorch. Perhaps this tobacco would would improve with age, too; I do find that heavy casings tend to evaporate in the jar over time.

Age When Smoked: Straight from the shop

I decided to continue to explore more of the tobaccos from pipe makers that I respect. Although the Comoy's of London tin label indicates made in the UK, the US distributor, J. B. Russell's label shows it as made in Germany. There was also a tin insert from Kolhase & Kopp that I believe is a German blender. The end result is a tobacco most like a true Danish Cavendish. The golden tobaccos have an ideal moisture content and result in a cool smoke that requires little attention in varying bowl sizes. Although this appears as a high quality tobacco, it has been heavily dosed with casing. I normally smoke VA flakes and would classify this blend as highly aromatic from the tin/room aromas to the taste. All remind me of the Chunky candy bars that I used to devour in my youth. That's not necessarily bad but I missed even a hint of natural tobacco taste and the lack or variation from start to finish of a bowl. Dedicate a pipe to this blend if you try it since the flavoring will infect it and influence other smokes. After resting a pipe overnight, I could still sense the strong flavor on the bit even before lighting another smoke. I might use this blend in company or hot weather but could not add it to my regular rotation or as an all day smoke.

I concur entirely with those who speak highly of this blend - clove, cinnamon, ginger, aromatic spices... this is excellent. It smokes well with few relights, despite its moisture content, and burns consistently with a well-rounded flavour.

This is a fine addition to the newer evolutions of the Comoy line, and holds its own against any aromatics that I have tried over the years.

The tin does smell good, like a spiced winter lager, and for once I think I might have liked the topping to come out more in the smoke. It might help to cover some of the harshness of the tobaccos in this blend. I didn't really get bite from it, just a lack of smoothness. I will see what age will do for it.

12-1-11 A couple years in a jar has actually smoothed this out a bit. Not bad at all. I'll leave the rating where it is, since this is still not exactly my style, but that doesn't imply a lack of quality. I hereby retract my above statement concerning harshness, and lovers of light, spicy aros will be pleased by this blend.