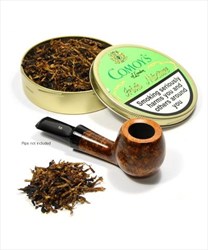 I was extremely impressed after trying this blend. I like a little Whiskey flavoring in my tobacco from time to time, and am a big fan of Peterson's Irish Whiskey. I thought this might be an English version of same. It was, and is even more tasty.

The Comoy's name stands for quality. I found the light colored virginia and mottled brown burley leaf to be extremely well aged and pleasant in a mild sort of way. The Irish Whiskey mist is way off in the background but enhances this delightful blend perfectly. I sure wish it was still being made.

I'm not usually a fan of whisky aromatics, or any alco-topped blends for that fact; I often find the taste to be too false for me. This, on the other hand, I enjoy.

The best feature with Irish Mixture is how the whisky doesn't domineer the entire flavour. It gives a mild hint, but that's all. I don't get any bitterness or acridity from the addition, it's actually very mild with the added flavouring.

The lowest feature is tongue bite; I have to sip it slowly or there's a price to be paid!

Mild again: this time I'm talking N; it isn't a smoke for complete sissies but it's not far off!

I wouldn't call this a Whisky Aromatic; the whisky's nowhere near strong enough for it to even be considered one. The whisky in this is more of a 'tobacco seasoning'.

This fine tobacco is something of a tongue-tingler. The whiskey flavour predominates in a pleasant and ever present casing that has depth, if little complexity. Aromatic in the best sense of the word, and an even burn throughout the bowl It offers best results when sipped slowly, savouring the tobacco rather than greedy efforts to get the best from it with hard puffing. It isn't a tongue biter, exactly, but carries a rich mouth feel that can nip if driven hard.

I would rate this highly when allowed to dry slightly, and if you are seeking a good quality aromatic. Buy and cellar.

Age When Smoked: Fresh from the tin

Purchased From: Turmeau and GQ

My first tin. After some days I am 2/3rds of the way through.

Open the tin and you see a multitude short, light brown ribbon and even shorter pieces of dark flake. Mildly discernible whisky aroma.

Lights perfectly well, doesn't need too much relighting as you progress, doesn't burn very slowly but not too fast. No bite.

At first you may not be too impressed. It seems okayish. No great whisky flavour or aroma - but I guarantee you will, sooner rather than later, catch an aroma that you will just recognise as classic pipe tobacco - yes, I know, that could mean anything - and a deeply satisfying sensation.

By the stage I've reached in smoking these first tin contents, this baccy has really grown on me. I realise that it is definitely a quality tobacco mixture. Every time I fill my pipe with it now I know I'm going to have an enjoyable and satisfying smoke. It already feels like getting into an old comfortable armchair that I've known for a long time. I will definitely be buying more tins, but just now I've ordered Comoy's Scottish mixture, which I've also not tried before.

I do very much recommend this Irish mixture.

Again it's clear that comoys will not put there name to any old rubbish. The quality is there without any doubt. Smells absolutely delicious. Although I don't detect any whisky personally. It to me has a confectionery type smell. It smokes well. A beautiful silken texture .that does go well with Irish whiskey

Purchased From: My smoking shop