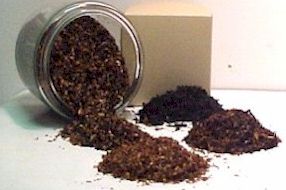 All long cut tobaccos flavored with the finest pure maple available. Pressed to retain flavor, this blend is then ready rubbed for the smokers delight.

The black cavendish is brown sugar sweet and the gold cavendish provides a little grass, toast, citrus and a drop or two of honey. The maple topping tones down the tobaccos, though it suffers from lack of strength. Barely has any nicotine. Won’t bite or get harsh. Burns cool and clean and slightly fast with a fairly consistent flavor, though you may notice the tobaccos a little more in the last quarter of the experience. Leaves some moisture in the bowl and needs about an average number of relights. Has a weak after taste. Can be an all day smoke.

This is the first maple tobacco I have tried, and for that matter maybe the last. I was hoping to enjoy it more than I did, but in the end thought nothing spectacular of it. The cut and moisture were acceptable but at the end of the bowl there was a substantial amount of goo left over. I think the room note is good, but a bit sweeter than I like. Overall I think the idea of a maple tobacco is an interesting one, but just not for me.

No exotic mix of flavors here. When you open the pouch you smell maple, pure and simple. The tobacco packs well, lights well, is at a moisture level that you would expect, and it burns well. I got this because I had been tempted to try the ancient drugstore blend, Rum and Maple. But, it seems to only be available in $30 sized tins. The tobacco flavor is really not bad. I could smoke this all day, but I think those around me would start to feel like they were working at an iHop. So if I am on an aromatic day, it will probably be Black Bellied Tree Duck, but occationally I will work this into the rotation as it is really not bad and delivers exactly what is promised, maple.

A sample of this was stuck in my bag when purchasing a pipe in Las Vegas. Normally, I promptly dispose of flavored tobaccos, but I do have a fondness for maple, so I tried it.

Outcome: wonderful room note. Flavor: slightly vanilla, the maple is more of a volatile fragrance than a taste. Not much to taste. Not particularly sweet. Nicotine: little if any. Burning qualities: not a problem, smokes cool for an aromatic. Bite: ouch! not worth it. I smoke unaged virginias with less bite than this. I got what I paid for and into the trash it went.

If you like maple, do the right thing and get some Vermont Maple Cavendish from Pipeworks & Wilke.

This blend is truly self explanatory. There is a sharpness to it when you first light up. It is a bit acrid. This settles down however, and it is pleasant, albeit rather boring to me. It is very well behaved in the pipe, and is a very inexpensive blend. There are better, and yet there are much worse! It can often be found in various drug stores for about $10 for a large sack.