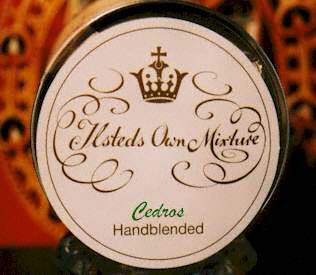 An excellent Virginia, burley, Kentucky mixture. The tobaccos mixed in the proportion, and small part Virginia leaf tobacco give this tobacco a natural sweetness. A tobacco either for the beginner or the passionate pipe smoker.

Please note: this is described on the U.K. websites (G.Q, MySmokingShop) as having a topping of cognac and honey with Black Cavendish as opposed to Kentucky.

This, going on the taste would appear to be accurate! The first sign that suggests the presence of honey is the aroma from the mix, there is a definite added sweetness to it. This comes through perfectly in the smoke, the honey is without doubt the main player in this blend. I also get a piquancy that is synonymous with the addition of alcohol. The Black Cavendish is present in a small quantity, without smoking it I can see that from the mix! In the smoke this comes forward very subtly, a gentle touch that works harmoniously alongside the honey. There is very little nicotine to this one, it would maybe suit a new piper? This is superb with tongue bite, I can puff like a steam train and still not get a nip!

This is alright, it's not majorly offensive but to me it lacks any raw tobacco tastes, the sweet honey and sour cognac are far too unfair with the flavour ground.

Two stars as it's too false for me.

This blend is just nothing, it's extremely flat, no taste, just ...nothing! Don't spend your money on this blend!

This could be an excellent tobacco if it only had more strength, more character. As it is, it takes a long while before anything happens in the bowl (or the palate), by which time you may have a severe case of tongue bite.

The 100 g. version comes in a beautiful wooden box, the tobacco wrapped up in a golden metallic paper. Very nice, very elegant. The tobacco is a mixture of colours and shades, very pleasing to see: bright yellows, reddish hues, dark brown and black ribbons. It smells fresh and natural, with a rather smokey -sweetish note, probably due to the presence of Kentucky and light Burleys. But that is about it.

Once you pack it in the bowl and the flame hits the tobacco?nothing happens! Sure, smoke comes out, a rather dry and slightly hot smoke, but where is the flavour? Like the wolf in the Three Little Pigs story, you draw and you draw (first you do it slowly, but because there is no flavour coming out, you tend to do it harder), but I?m afraid there is no reward. I left it to rest for a while and let the pipe cool off. Tried again. Same results. This time, however, my tongue was ablaze. Did not smoke for a couple of days, tried again, and only the mildest form of flavour tiptoed from the pipe. It was nice, but very restrained. Gave up.

I still have the box on my desk. It is charming, and you can keep ink jars inside.