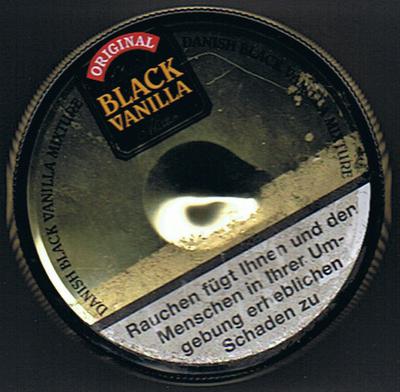 Mild black cavendish and nutty burley are refined with aromatic vanilla. This mixture is pressed under high pressure and cut into flakes. A softly and aromatically smoking pleasure with marvelous fragrance - unmistakable.

Given the limited choices of pipe tobaccos here in Tehran (Iran) amongst about 20 brands such as Captain Black, Borkum Riff, Colts, Mac Baren, etc., tried this Planta Black Vanilla Mixture blend (and not inhaling). To me it is a bit biting but overall has a great flavor. (For an alternative to a cigar, as Cuban cigars have become very expensive here recently, also tried making a cigar leaf blend like the Mogano 146, Dominican Glory or Compton's Cuban Style Cigar Blend that are listed on this site. I added about 10% by vol. Cuban cigar leaf to this Planta blend. And it was a satisfying smoke with cigar taste and aroma connotations.) Will definitely keep in my rotation when craving for an aromatic pipe smoke.

I bought this one by pure coincidence – I was intending to buy something totally different, names got mixed up, so did the tins, and… yeah, ended up with a tin of this stuff. Quick look at the reviews below, and I was expecting – well, what you can read for yourself.

Yes it is true – the tin looks like over the counter stuff, and so does the plastic bag inside, the aroma upon opening is trivial and cheap (in a way), and again yes – first puffs are really nothing special…
But… half way through the tin this stuff woke up. It is smooth with lovely vanilla notes – by no means is it this artificial flavoring (well, it is, but it tastes just great). Burns evenly – no gurgling, no tongue bite, keeps the moisture content very well. It so happens I’m smoking this in parallel with Larsen’s 2012 mixture and (sadly) I admit Planta wins hands down (at least for me).
Don’t get me wrong – it would have been nice if the vanilla was slightly richer and maybe more punch. But actually, I like it the way it is – just a decent, well performing tobacco. I will definitely buy it again.

Purchased From: Rotterdam, the Netherlands

A friend of mine gave me some of this blend.once you open the tin a vanilla aroma comes out.some nuts and cocoa hints are also detected.the flakes are dark with proper moisture though not very manageable.i rubbed them twice to pack and light easy.while smoking the flavours are somewhat balanced between the burleys wich are sour with some cocoa hints and molasses.the cavendish are mild vanilla flavoured and perhaps some honey hints.the virginias are grassy though a lot toned down.the flavours are generally ok not the perfect combination and the vanilla flavour doesn't feel very natural.burns slow and hot with some moisture being created in the filter to total ash.the room note is nice but not something unique.the aftertaste is sour.no tongue bite appeared.it is an all day smoke.i 've tried better vanilla blends with better quality and taste.

Age When Smoked: Rubbed and packed at once

This is quite good, but nothing extraordinary. In all fairness the vanilla's more like a delicate embellishment rather than a leading flavour. To me, retro-haling brings out the full character. The tobaccos give quite an unsurprising flavour, for an aromatic blend. It burns well and doesn't bite unless forced to do so; and then it's not too harsh a bite.

Not the best vanilla blend, not the worst. Somewhat recommended:

The very nutty, earthy, woody, molasses sweet burley is the main component. The sugary black cavendish offers important support. The grassy, tart and tangy citrusy Virginia cavendish is just above being a condiment. The artificial tasting vanilla has a bit of strength. I also perceive a touch of cocoa, and an undetermined sweet additive (honey?). They sublimate the tobaccos quite a lot, but they don’t drown them out. I’m not sure what causes the sour note, but it is distracting. The strength is in the center of mild to medium, while the taste misses the medium mark by a couple of steps. The nic-hit is mild. Won’t bite or get harsh, but if you puff fast, you will likely experience tongue tingle. Burns a tad warm at a reasonable rate with a mostly consistent flavor all the way to the end. Leaves a little dampness in the bowl, and requires an average number of relights. The after taste is spoiled by the chemical hit. An all day smoke.

As the unofficial start of summer, I decided to buy another aromatic at the weekly pipe club meeting. There was one tin left on the counter and since I like black cavendish/vanilla blends I bought it. The taxes are so bad in California that this set me back around 15 bucks for a tin. I should have read the reviews first before forking over my hard-earned money. I was smoking mostly English at the club and decided to wait and smoke this one last so I did not have to do a lot of blend swapping. Also, another member likes aromatics and I invited him to join in on the fun. Upon opening I was hit with the strongest stringent vanilla/fruit liquor smell that I have encountered in a long time. You could smell this across the room. The tin description says this is flavored with Vanilla. Not going to argue the point but it smoked and smelled more artificial rather than natural. Also, I noticed it was in a plastic bag in the tin, never seen that before. I was going to smoke this in my Chacom Volcano but decided to sacrifice an unfortunate old cob I had in case of the ghost. It is not really a bad smoke but I have had better. I gave the other guy a nice sample, as he liked it but hey there is no accounting for taste. :) I wanted to get this review done because I am not sure when I will be returning to this blend. Who knows, the other guy may be getting a gift soon. I have also noticed my reviews for the ones I do not care for seem to be longer, maybe due to the whining factor. Ha.

Similar Blends: One of a Kind..

Danish Black Vanilla was recommended to me when I started smoking and bought my first pipe out of the basket. The aroma is extraordinary sweet, smells intensely more like some kind of sirup additionally enhanced with lots of sweetener than natural vanilla. The tobaccos used match the price tag in the lower segment. Handling is easy and the room note is excellent (for non-smokers). I like it better using a charcoal filter.

If you look for real tobacco in taste, this one is not for you. I would also not recommend this tobacco to beginners today; however, I recently bought another tin and tend to really enjoy it in that same basket pipe I started with for sentimental reasons. Good memories most likely make it appear better than it actually is and at least I didn’t quit smoking pipe starting with it 16 years ago.

I bought it in a 40g pouch not a tin. It burns a bit faster than I expected but evenly. It is very hard to notice the flavor in the smoke. It does not gave a tongue bite. I probably would not buy it again.

ORIGINAL DANISH BLACK VANILLA MIXTURE: This is the same as Danish Black Vanilla and I don’t know why there are two entries for this blend. Anyway this is a mild mixture with only one positive note: the flavoring with an excellent Madagascar vanilla. The vanilla flavor is strong and delicate at the same time. Overall this blend is mediocre, with few qualities. No offense, but a classic unpretentious Danish blend (IMHO of course). It is ideal for flavored mixtures’ lovers, for vanilla’ lovers and for beginners in pipe smoking. Not for me, not at all. Too mild, too flavored, too unnatural, too far from my taste. So, in my personal rating system (from 1 to 10) my score is 6 and two stars.

If you are going to a hookah party and want to blend in, then this is the tobacco for you.

Got this one mixed up with Danish Black Vanilla that I wanted to try (but in flake). Don't know if this one is similar or not. It is extremely flavoured, like hookah tobacco, it does not burn so well, and behind the aromatic flavour there is a sour taste. No genuine tobacco taste. Candy-tobacco. I judge it based on my own preference (hence 1 star only). But if you are looking for a heavily aromatized tobacco, you might enjoy this.

I always loved aromatic tobacco, even rolling aromatic for cigarettes. Just wanted to try this one, but I was disappointed after I lid my pipe for the first time with this one. Sure the aroma from the tin was great but as soon as you fire it up the whole aroma and essence disappears. Burns even but very quick. The room note is tolerable. In conclusion, this one is nice for a fast morning smoke with a coffee just before you head up for work

I did not care for this at all. I like vanilla tobacco but found this one harsh and just about unsmokeable. The vanilla is present but has a chemical/metallic sort of flavor. I cannot recommend this. Nasty stuff!

this is the new tin for the tobacco that is listed under " danish black vanilla " name.

actually they both are " danish black vanilla mixture ", same thing, new tin design. and it is the worst vanilla tobacco.

Smoking this tobacco is like boiling water in your pipe. no taste , it's like hot vapor, and burns really hot too.

I used to love aromatics. Not all, but some have always made my delights. This is one of them. The flavour is somewhat mild, but the sweetness of the vanilla and a little pleasant refreshing sour taste come through. It lights pretty easily, and burns well all through the end of the bowl. This is currently my favourite aromatic, replacing any other Vanilla aromatic or even replacing any other aromatic blend. Note that it is quite different than almost all aromatics. This has two downsides, if you smoke it to quick it becomes extra hot (though not bitting too much), the other is that you just want to keep smoking it all the day.

When I ordered this thing, I got PLANTA's Danish Black Vanilla. Is it the same thing? Does anybody know?

See my review under Planta.

Planta Original Danish Black Vanilla Mixture has a mouth watering tin note. It is sweet vanilla with a hint of tobacco present that smells good enough to eat. The smoke is simple. There is a dusty earthiness and some nuttiness out front. The VA cav is tangy with a hint of citrus that comes out once in a while but overall this is subdued below the vanilla. The Vanilla is really fairly strong it is out front with every puff and you can taste the alcohol used to bring out the vanilla as well there may be some added sugar here too as it is very sweet. The room note is nice overall no complaints from anyone and it smokes fairly dry. It did leave a slight prickle on the tongue but that went away after an hour or so. The finish is quite long with a lasting sweet vanilla flavor. The nic hit is very mild. A nice change of pace; a nice straightforward vanilla aromatic.