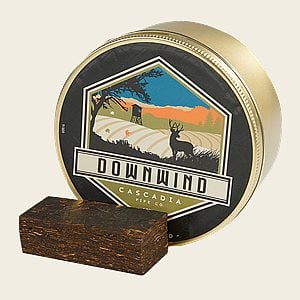 Whatever you do while enjoying the great outdoors can be quite exhilarating. So when the evening comes and it's time to relax before turning in, a good hearty pipeful is truly welcome, and to that end, Cascadia Pipe Co. - Downwind is there for your pleasure. This robust plug tobacco is made of richly fermented, earthy, spicy burleys and sweet Virginia that have been hot pressed to develop depth and flavor. A subtle top note has been added to smooth the flavor and add a touch of aroma. Cascadia Pipe Co.-Downwind will be a faithful companion for anyone who loves to fill their day with nature's activities.

The burleys offer a lot of earth, wood, nuts, some toast, and a touch of sugar as the lead components. The aspects of the dark fired Kentucky are earth, wood, vegetation, some floralness, spice, nuts, with a mild interplay of sweet and sour. The Kentucky is a little more obvious than Virginias, though it’s not as potent as one usually expects. The Virginias provide plenty of tart and tangy citrus, grass, earth, wood, bread, some tangy dark fruit, sugar, vegetation, mild floralness, a pinch or spice, and a touch of acidity. They are secondary players. There’s a very mild fruity topping that is hard to discern that moderately sublimates the tobaccos. The strength and nic-hit are a couple of slots past the medium mark. The taste level is a notch past that as it falls short of the center of medium to full. It won’t bite or get harsh, though it does have a few rough notes. The plug is moderately dense, and is easy to cut. It may require some dry time, though I did not do that. Burns clean, cool, and slow with a very consistent fruity, nutty, mildly sugary and floral flavor that extends to the pleasantly lingering after taste. The room note is a little stronger than the after taste. Leaves little dampness in the bowl. Requires a few more than an average number of relights. Not an all day smoke. Three stars and a half stars.

Summary: this plug uses more of the darker Burleys and so has a richer flavor to balance the Virginias and fruity mouthwash flavor.

Someone needs to go to the Scandinavian Tobacco Group labs and take away the bucket of mixed fruit and berry flavors that they seem to adore, with a flavor somewhere between Luden's cough drops and that ill-fated Listerine "strawberry" mouthwash from years ago. The basic plug here, while loose, holds together better than the other Cascadia Pipe Company offerings, and with a range of Burleys in the darker area as well as those nice cheap light young Burleys that form the basis for every low-cost aromatic or RYO tobacco in existence, it offers a roasted and fermented flavor faintly pulsing behind the onslaught of topping and new Virginias, mostly bright but with a fair amount of red. When this one goes on the sale rack it will be worth buying because at a normal price, it would not be a bad deal, and after a few years of failed marketing hype by influencers, the berry assault may have burned off a bit, leaving the leaf which at that point will have aged enough to smoke, which is by itself not bad at all.