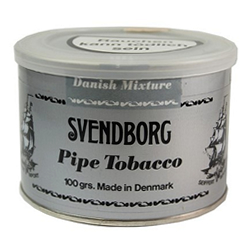 A mixture of Virginia and burley.

The flue cured Virginia is very grassy and citrusy, and there a smattering of dark fruit sweet red Va., too. The burley is nutty with a little earth and molasses in a supporting role. Black cavendish is not mentioned in the description, but I see some of it in the mix, and it accounts for a little vanilla. The toppings are hard to define, but I notice a little mango, orange, and coconut, though I think other sweet flavors may be present. I detect an occasionally berry note, too. There’s also very light spice which I attribute to the toppings. The medium strength floral quality to the taste reminds me of clove. The toppings tone down the tobaccos, but you will obverse them a little. The nic-hit is mild, just barely. A little moist out of the tin, I saw no need to dry it. Burns a little slow if not dried with a very smooth, creamy and consistent taste. The toppings do not weaken and there are no dull or harsh spots. Won’t bite. Leaves a little moisture in the bowl, but no dottle. Has a pleasantly lingering after taste and very sweet, mildly floral room note. Not an all day smoke.

Summary: an aromatic concoction of Cavendish, Virginia, and Burley that is pleasant-smelling but somewhat flavorless.

This blend presents an archetypal aromatic: mostly a "half and half" style mixture of Burley and Virginia, with added Cavendish and a thorough topping with a mixture of what tastes like rum, fruit, vanilla, and possibly cinnamon. It burns easily and stays lit well, with the flavors of the topping persisting through the bowl, but has light Nicotine and very little tobacco flavor. If you like heavy toppings and a pleasant room note above all else, this might work for you, but otherwise it seems like a somewhat pointless exercise.

My tin has "Made in Germany" stickered on it. Opening the tin, it smells a bit like a rum fruit cake. The scent is pleasant, but nothing really distinctive. The tobacco was ribbony, fairly dry and packed in tight.

It lit up with a single match and the initial taste and aroma was pleasing.

My wife isn't at home to ask her opinion of the room note, but if I sit back and try to smell it, it seems to be nice. Like a flavoured smoke, rather than just smoke.

I puff pretty often, so my bowl is getting hot.

I feel relaxed sitting in my chair smoking this and thinking about what to say in my review. There's a little harshness in the back of my throat though.

Halfway through the bowl, and the pleasant taste and aroma are still there. I have not had to relight yet.

Ok bowl is finished. Near the end I got a little tiny bit of unpleasant taste, which seems to be common for aromatics.

Overall it was a good smoke. I'm happy to have purchased this. Got a very slight vitamin N buzz. Wouldn't be my first choice, but I wouldn't ever say no to this blend.

Age When Smoked: Fresh, as far as I can tell.

My tin had Made in Denmark overstickered by Made in Germany indicating its current origin. The mostly redish ribbon cuts were intermixed with some lighter golden VAs and a few almost black pieces. I got improved smokes by reducing the intital moisture content but in doing so, a much faster burn rate resulted than my normal VA flakes. However, overall, we still maintained a cool smoke without bite. The tin and room aromas are slightly fruity but not sickening sweet. Some nuttiness from the Burley or casing was evident but as with most aromatics that I try, little true, tobacco taste came thru. This blend was also much weaker than my preferred choices and I remained unsatisfied even after long smokes in large bowled pipes. Back to my hi test Flakes again.

I will assume people are not lining up to buy this stuff, since my tin arrived in the mail with a thin coat of dust on top, but wow what a tin it was. The actual tin itself has a recessed lid (like a can of paint) and takes a screwdriver to pop open each time, so I felt like I found a tobacco tin inside a bygone era supply truck.

Clearly, the contents haven't seen fresh air in a good long time - there was a pungent aroma of cheap candy, damp cardboard, and sour fermented cherries, when opened. Now, I don't mind some strongly topped Aromatics, but this one smelled like a chemical plant. The cut was interesting, with super chunky pieces, half blonde, half black, that were quite wide and caused restricted air flow when moderately packed down inside the pipe.

Once going, which took several relights, all the casing/topping fought with each other and dominated the smoke in such a way, that it became bitter and gross, with only some Vanilla taste on the tongue afterwards. It was likely too much sugar blowing out your buds, disabling their sugar sensors.

Suffice to say, I did not like it, and will be gifting the rest away. The one saving grace was the nostalgic tin and 'manly' cut.