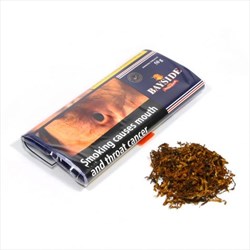 Originally blended for pipe smokers, the Bayside Tobacco not only represents great value but this medium strength blend burns slowly, allowing you to enjoy your smoke. The resealable pouch is designed to keep the tobacco fresh, from the first smoke to the last.

Notes: Contents assumed to virginia based, although the 'mixed' content is not specified.

From the name I presupposed a fine mixture fit for a tube. But, upon opening the pouch I was greeted by a darkish ribbon; a definite ribbon, not too fine. Now, for anyone who bothers to read my reviews you'll be aware I like my tobaccos moist, but without my over-scrupulous examination this still only qualifies as 'way too dry'!

On to the smoke. At first I quite enjoyed it, the taste was one of a half-decent VaBur. I found the smoke to taste of quite spartan, rough, Burleys with a soupcon of sharpness from the Virginia. Not a bad start. Sadly, after a short while, a flavour of 'paint' entered; chemical, toxic. OK, I'm being melodramatic, as the volume of this wasn't great it didn't completely detract from the tobaccos but still can't be considered pleasant; IMO! It came as no surprise that the dryness caused a rapid burn!

Mixed Shag? Not the worst but definitely not the best. Two stars:

Rather disappointing actually. It doesn't smell of anything very much and I have to say it didn't look particularly appetising either. It sits there in the pouch staring back at you, with it's impudent twisted dry dark-hay/grass-like appearance daring you to take a pinch.

Ok ok it's not that bad to be fair. It's reminds a lot of the Blue Orlik Club, sister to the incredible Golden sliced. It's cut quite coarsly and so dry you'd think it would making good kindling. I can tell you that it doesn't ; it takes several lights to get this mixture to burn.

The smoke is all kinds of everything. Neither the pouch or the official description gives much clue to the content of this mixture. You could make up anything really. It's probably (and I expect to be corrected here) a blend of burley/kentucky/virginia with a strange woody character that reminds me of that strange Woodruff stuff I got from my pals in Germany. I also have a suspicion there might be a small - very small - scraping of latakia mixed in.

When it does decide to burn it's burns away very quickly and the light grey ash is rather cigarette-like. Don't return to a half smoked pipe with this one, take it all in one go if you can or use a smaller bowl.

Not the greatest of addition to a range then, but stuck on a desert island you'd probably be ok with this.