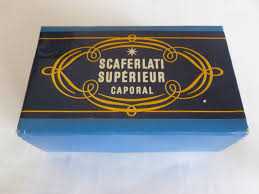 Unfortunatelly for me, I bought this tobacco in its new package (a pouch whereas it was in cube of paper a few months ago). The taste is the same but it was for the tradition. I enjoy natural tobaccos (no flavoring or casing, no additive, etc) so I appreciate this one. Meanwhile I found it wasn't the best natural tobacco, even if it's an institution in France. Maybe it has changed with ages. It's strong if you smoke it too quickly, tasty if you smoke it slowly. Obviously, smoke it dry. Long story short : if you like this type of tobacco, try it. Otherwise, pass your way.

A friend gave me a packet of this tobacco - as smoked, I'm told, by Inspector Maigret, of whom I'm an admirer (though I notice that Georges Simenon himself, who made a sort of second career of pipe smoking, liked Dunhill Royal Yacht).

Maigret or no Maigret, I have to admit that this is not my kind of thing at all. I'm not all that fussy, and I don't like fancy "boutique" tobaccos, but this is in a class of its own. It's as rough as a badger's ear and completely without frills or pretension: rather like smoking one of those infamous French cigarettes in a pipe. I'm inclined to recommend it somewhat because, for what it is - a rough-and-ready, cheap-and-cheerful "peasant" tobacco - it's a classic, and if you like that kind of thing you'll like this. It comes rather dry in its paper package, and burns away quickly. It doesn't bite you, and it isn't as strong as you might expect, but it certainly isn't for the fastidious palate.

I think French intellectuals of the Sartre/Camus era smoked stuff like this as a matter of principle. It was an experience worth having, but I won't be repeating it. If you like roughing it occasionally, have a go. The room note won't win you any friends.

The original GRIS GRIS,very French and like Gitanes an aquired taste. A tobacco with few saving graces . Thinking back it was very like Roll Your own tobacco a sort of fine cub cut . In fact i think a made a couple of roll ups with it .But if instant mental transportation to a cafe in say , Lille is what you need then nothing can touch it. Probaley the cheapest stuff you can put in your pipe and with good reason .