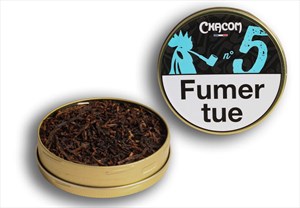 Chacom's #5 is a fairly strong English blend composed of Dark Virginia and a generous portion of Latakia. It is completed with some Black Cavendish and Périque.

I first had this last October, as the Winter was on us, but dug a tin out this afternoon as the weather became cooler as opposed to this morning which was red hot!!

The blend's quite coarse, none needs more rubbing but it's easy to see it's a broken flake. The colour's dark, brown and black, with a tiny amount of lighter flecks. A whiff of it makes clear there's more than enough Latakia in it!

The Latakia is at the front of the pack; a little sharper for the first few minutes but takes on more of a calm smokiness as the bowl burns. I get a ripe fruitiness from the dark Virginia, but not any citrus. There's a spiciness which presents itself about halfway through, but up until this point the Perique seems quite dormant. Black Cavendish? The BC, as you'd expect, softens the flavour and thickens the build. The burn from it's remarkable, the temperature's cool.