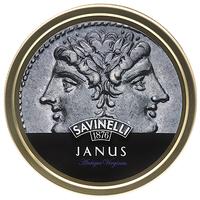 Savinelli's Janus is an ambrosial mixture of bright Virginias, Orientals, and Perique, fascinatingly nuanced and exotic.

The spritely bright Virginias provide a lot of tart and tangy citrus, grass, light hay and floralness, bread, some tart, acidic lemon, sugar, and a pinch of spice as they take a small lead at times. The rather floral Orientals offer earth, wood, herbs, vegetation, a fair amount of spice, some sourness and light sweetness, a few small sharp and rough edges as a competitive player. After the first few puffs, they mostly rise a tad above the Virginias. The spice from the raisiny, very plumy, earthy, woody, figgy perique intertwines with that from the Orientals to rise this aspect a step beyond moderate. The other characteristics of the perique reveal themselves just above the condiment threshold. The strength and taste levels barely reach the medium mark. The nic-hit is a slot and a half behind them. There’s no chance of bite or harshness, and overall, sports very few rough notes. The flakes easily break apart, and need no dry time. Well balanced, mildly complex and nuanced, this blend burns cool, clean, and a tad slow. It has a fairly consistent sweet, mildly sour, spicy, floral, rich flavor that translates to the pleasantly lingering after taste, and slightly stronger room note. Barely leaves any dampness in the bowl, and requires a few more than an average number of relights. Despite its inherent depth, it can be an all day smoke. Four stars.

A truly splendacious blend; I love it!

The flakes appear rather compressed together. There's just one row, they're a little speckled in colour, have good hydration, and the Perique is easy to identify in the aroma. Filling up is as easy as from a loose kake; just pinch some and stuff it in!

At first the VaPer side takes the lead; fresh and sprightly Virginias with a touch of toast, yet sharp, slightly bitter, dark fruit sweet Perique. The Orientals make the blend quite inimitable, they detract from it being 'any old' smoke. Sure, they take until halfway to gain recognition (IMO), but when they join in the fragrance from them really brings a buoyancy to the smoke which elevates the pleasure! It burns at a fairly slow pace, giving a very cool, quite thick smoke which refrains from biting.

Summary: a nice, slightly bitey Virginia/Perique blend that gains a bit of depth from the Orientals.

About a decade ago, Va/Pers were the undiscovered territory of pipe smokers, having been left to "Three Nuns" which was fought over by industry titans. Now we have lots of Va/Pers, most of which are breakfast cereal levels of sweet, but some of which challenge the palate. "Janus" enters with a mixture heavy in bright Virginias which is both moderately sweet, for its triumph, giving it more of the flavor of a good berry jam -- slightly tart, acidic, with an inner sweetness -- than the marshmallow wallow in fructose which your average big name Va/Per provides. The Orientals, which introduce a smell like old feet within the stewed spicy fruit tin note, add a sweet-sour flavor which gives depth to the Virginias. On the downside, it has a bit of bite, since these new Virginias are super acidic on the tongue, and this means that the blend will be great after five years but might be too tingly on the taste buds before then. If I had a wish list, it would be for them to include some dark fired Kentucky Burley and white Burley, then press this with the same method used to make the HH flakes. This could be a market-dominating Va/Per but it's not quite there... yet. I enjoy smoking this, but might not buy it again.

Note: Mac Baren does NOT manufacture this blend, confirmed by email on September 3, 2020. This explains the C&D style loose flake with new bright Virginias. I recommend aging this tin for a minimum of five years, at which point it will probably be quite tasty.

Of Savinelli’s most recent offerings, Janus sounded best to me, and I have not been disappointed with it. In the tin are what appears to be a stack of “perfect moisture” cut flakes lying on its side. Colors range from light-red-ish to medium dark brown. Tin note is woody, grassy, earthy, moldering meadow grasses, dates, and mulch. There seems to be some sort of very mild topping that I can’t quite draw a bead on. I like to take a few chunky “ribbons” out to dry a little, then I bundle them and stuff them into the same pipe I prefer for Savinelli’s 140, C&D’s Sansepolcro, and Warped/C&D’s The Red Hunt. Janus handles, loads, lights and smokes down very well, with plenty of (though not copious) smoke. I would say the dominant leaf is Oriental, with the odd twist that Janus smokes slowly, unlike most Oriental tobacco. This is a very fragrant treat for Oriental lovers, and the pale VAs are well met, fragrant and meadow grassy, with the Perique deepening the tastes and smells with musty dates and some plummy effects in addition to its own savory spices. The lot is both sweet and sour. Not sure where the floral effect comes from, but it’s nice. This is a complex blend that is balanced enough to be a no-brainer, and I can pull hard if I want to, or I can slow down for more ethereal side notes. Strength is medium, with not much in the way of nicotine. Tastes are over medium the way I smoke it. Room note is better than tolerable, and I suppose this owes at least partly to the elusive topping. Aftertaste is a nice, long trailing off of the best of the smoke, sweeter and sweeter as time passes.

If I have to deal with the allusion, the two faces of Janus here are sweet and sour; but there’s more to be had, and the lot stacks up to 4 stars, IMO.

Savinelli Janus is a really attractive flake that is a pleasure to work with . Packs and lights like a dream . Usual tin note of this type of blend , very oriental forward. The smoke is enjoyable though not too complex , Plenty of oriental flavor but the perique sort of gets lost , not much fig and prunes here . The Virginias , though young , stand up nicely providing some grassy bulk to offset the Orientals . Overall this is a decent smoke but I cannot give it 4 stars when comparing it to HU Joschi's Oriental Sunrise or G.S. Pease's Cairo or Embaecadero . It simply does not work with it's partners well enough. Not to say that it is a poor smoke , quite opposite . I simply think that , when compared to other tobaccos in it's class it falls a little short . Not an oriental bomb ,but it does come a little too close for me .

Basically a VaPer with gently sweet undertones, braced by a gamey, musty Oriental mix that sets it apart. There are spice-like flavors (sensations), but they aren't prominent enough to characterize this as a spicy blend. Great mouth feel and smoke volume (I pack it fully rubbed-out).

Similar Blends: Belongs on the same shelf as C&D's Oak Alley, Chenet's Cake, GLP's Embarcadero, or D&R's Ramback Gold. If you like those, this is for you.

Based upon the ingredients I was expecting something more along the lines of Cairo by GL Pease.. Nothing against Cairo, but I was very pleased to find something unique and more satisfying in Janus.. Instead of being another bright virginia based blend this one has quite a bit of funk to it.. More of an earthy barnyard funk that must have something to do with the ratio of oriental and perique.. I find it quite satisfying and a lot bigger in flavor than I had anticipated.. The oriental sort of builds throughout the smoke and is assisted by the perique.. The perique, while not overwhelming certainly contributes a lot to the overall flavor.. It certainly sits on the sour side of the spectrum which I find quite pleasant as the bright virginia has the sweetness to balance it out.. Not a strong nic blend but when you have enough flavor like this does it can still hold up as an evening smoke just fine.. I like it quite a bit.. Should age very well.

Janus, the Roman god of duality... is a good name for this blend. The first scent after opening the tin is an earthy, mulch-like... almost manure-like smell. It not bad though, just very strongly Oriental. The smoke is the same way, a nice musty Oriental with touches of the Va/Per sweetness. The combination is excellent IMO.

Janus isn't really like anything else I've smoked. The closest thing I can think of is C&D's Oriental Silk... and Janus is like a more strongly flavored, better version of that.

Bottom Line: If you like Orientals, you'll almost certainly love this one. I love Orientals... 4 stars.

I received a tin of Janus with a recent Sav pipe purchase from Smokingpipes.com I picked the Janus as I thought the oriental/perique additions sounded the most interesting.

Upon opening there was a large block of flake comprised of a variety of different tobaccos as expected from the tin description. The moisture level of the flakes seemed ok, so I did not dry out and used a rub out technique on the first few bowls. After a charring light, the tobacco took well as burned at a very slow rate.

The taste to me was led by the orientals in each of the bowls and across several pipes. The VA was held in the background but there was a sweetness that would drift in and out of the smoke. I didn't get much from the perique unless it was mixing with the Orientals in the spices.

No bite, no overpowering nicotine wise, slow burning. An enjoyable smoke and I wonder as the tin ages (or is jarred) if the components will blend together to a greater level and improve even more.

I'd rate this 3.5 stars, its not the best thing ever, but I'd smoke more of it given the chance.

Age When Smoked: fresh from tiin

The tin is attractive and has an image of a Roman god just like the other two tins. This one has an image of Janus on the front. Opening up the tin I find a nice stack of well made flakes, but they are less pressed than other offerings by Savinelli notably Guibileo d'Oro. The tin note smells similar to Bayou Morning Flake, with a more earthy and tangy note from the Orientals. It came a little more wet than I'd like, so I left it open for a little while before jarring. It does fold and stuff well, and after a light dry time it lights consistently.

When I light my pipe the leaf I taste fist is Virginia: bready, citrusy, and grassy. Next, I taste tangy, woody, and earthy Orientals. My favorite Cajun spice, is in a moderate amount in this mixture, but it adds a nice dark fruit and spice to the mix. This is a nice bready, spicy VaPer.

The taste I give a medium. It's what I would expect for an average VaPer. The strength is also average for a VaPer, there isn't a high Perique content so the strength stays a medium. The room note is a little harsh but I think it smells good.

I give this one three stars. It should be on your list to try, but I don't think it does enough to get me to buy another tin personally.