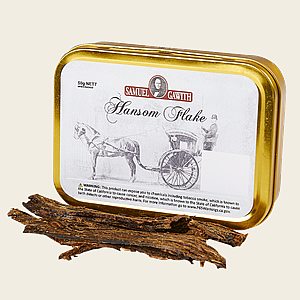 Samuel Gawith Hansom Flake starts with select grades of Virginia that are naturally sweet. Then, a good measure of perique is added more for sweetness and depth than spice. A special Lakeland essence is added before pressing to enhance the natural tobacco flavors, and the pressure embeds the top note deep into the leaf. The result is a blend with a mellow sweetness, smooth flavor, and a singular aroma. For something different than other Samuel Gawith blends, Samuel Gawith Hansom Flake will deliver.

The Virginias provide a lot of tart and tangy citrus, grass and hay, light earth, bread, wood and ripe dark fruitiness with a rather floral quality, a couple pinches of spice, light fermentation, and a minor acidic note. They are the lead components, but not by much. The potent perique offers a burst of pepper, stewed raisins, figs, dates, and plums as strong competitors to the Virginias. The floral toppings don’t really remind me of what I consider the standard Lakeland essence to be, but they do mildly sublimate the tobaccos. There's also a very mild stream of chocolate (possibly from Tonka Bean?) throughout the experience. The strength is a step past the center of mild to medium, while the taste is a couple of slots past that mark, and falls short of the medium threshold. The nic-hit is a shade less obvious than the strength level. Won’t bite or get harsh, and has a very small rough edge. The tobacco is a little moist, but not as much as many other SG products, and I saw no need to dry it. Burns cool, clean and slow with a very consistent, mildly smoothly sweet, floral and spicy flavor that translates the pleasantly, lightly lingering after taste and room note. Leaves little moisture in the bowl, and requires a fair amount of relights. It has just enough depth and body to preclude it from being an all day smoke, though it certainly is repeatable. Three and a half stars out of four.

While opening, the tin note is a very mild chocolate mixed with Play-Doh. The smell is almost non-existent. The tobacco itself is typical Gawith flakes that are lightly folded to fit in the tin. The folding causes the flakes to shred a bit. I decided to use a very large bowl to get any nuance these flakes might be hiding.

Due to the natural shredding of the folded flakes, I decided to lightly rub out the tobacco instead of my beloved fold and stuff method. I only allowed the tobacco to dry for about 5 minutes because my experience with Samuel Gawith blends have shown me that the more moist the tobacco is, the more flavor it will provide.

After lighting the tobacco with my hemp rope I immediately noticed two things. First, pure sweetness. Second, floral essences. As I smoked both of these subdued a little and a bit of spice (possibly even a touch of pepper) started to shine brighter. Upon retro-hale the spice and/or pepper would completely run me over.

As the bowl progressed the sweetness, floral essences, as well as the spice/pepper all melded together. The retro-hale never knocked me down with the spice and/or pepper for the rest of the bowl and became dominated by the floral essences. That mild chocolate and Play-Doh of the original tin note started to appear in the smoke ever so slightly and merged with the sweetness, the floral essences, and spice/pepper. This melding of flavors held through the entire bowl. Very smooth from then on out.

The Virginias themselves decided to come out of hiding about half way through the bowl. Grass and a touch of hay were noticeable until the end of the bowl. But always in the very back corner of the room. I smoked this blend for approximately 1 hour and 45 minutes. The tobacco burned to a fine grey ash. It required a fair amount of relights (but remember it is a huge bowl). It filled my Kirsten's valve with quite a bit of liquid. So much that I was forced to empty it about half way.

The tobacco is an easy 3.5 out of 5 stars. Possibly even 4 stars. A very smooth all day smoke. Very little Vitamin N to be found here. As long as you don't expect huge flavor going in . . . you will find a very pleasant experience.

Age When Smoked: A tin opened the day prior

If i want to simplify this review i would say its louisiana flake by G&H with less topping and call it a day. However you are paying more for the tin which lacks an appropriate seal any way, so unless you have extra steps to correct that weakness be prepared to jar it up. Other than that its a decent vaper with a twist. The essence is not your typical lakeland, again it is more cocoa malt bread kind of flavor which do not impact the smoke that much. Try it if you can do not remorse if you couldnt. Al janabi

This is my very first review on P&T. The first observation is the apparently new packaging design utilized by Samuel Gawith. The 50g tin has a hard cardboard rectangular "cover" inside with two fingerholes which protects the tobacco. The cardboard is attached to the tin cover by four round globs of mucilage--the type of glue commonly used when you receive a new credit card. I am unclear as to purpose, but it does not seem to have created any sort of deleterious effect on the tobacco. The tin note has an unmistakable chocolate/cocoa fragrance which does not manifest when smoked. The flakes are moist (as appears typical for Gawaith blends). I let dry for some 5 minutes. Initial char was actually somewhat harsh. The true Virginia/Perique blend appeared about a third of the way into the bowl and ultimately developed into a very smooth and enjoyable smoke. Customary sweet grass and hay noted for the Virginia and a bit of peppery Perique spice , especially on the retrohale. The Lakeland Essence was not noticeable in any way. A perfectly fine tobacco and to my liking, but not a "favorite", which remains reserved for McBaren's Navy Flake and the late lamented Essex of the Owl Pipe Shop of New Haven (the latter apparently impossible to re-create). A firm 3 stars.

My first bowl of Hansom flake was off putting to say the least . I was not all impressed with my first taste of “Lakeland essence “ . I am a big fan of SG blends but this one was like smoking a flower . I put the remaing flakes in a jar . About a month later I am smoking this again to give it another chance . I dried it out some more to see if the topping would ease up some . It has helped some as the next couple of bowls were much better . The Virginias have some baked bread and hay and citrus which is nice . The Perique is quite evident with dark fruit and a little spice. It has a bit of a nic hit also . I won’t buy it again for sure . I would however buy St. James flake again because that is what I think a Vaper should taste like!

Finished a full tin of this and on my 2nd so I guess I like it! It is on the stronger side of a VaPer in both flavor and spiciness. One of the driest SG blends fresh from the tin. Maybe 5 minutes of dry time for me. Smokes down nicely with no excessive moisture. Burns to a white ash. If a strong retrohale is up your alley, you will enjoy this blend. I will add that I am not a Lakeland fan and it is barely present in this blend. If anything it is in the first 1/4 of the bowl then disappears. I am glad I did not pass trying this blend because of it. Should age well. With coupons at P&C I have been stocking up around $8 a tin.

I like Lakeland's, so a new blend from Sammy G is something to get excited about. I ordered 7 tins. When they arrived, 6 out of 7 tins had "burped" and lost their seal. Probably due to haphazard packing. I quickly transfered the 6 tins to a mason jar. The tobacco was fresh and a bit moist, but not SG sopping wet. These are large flakes (like you get with Gawith bulks) folded over to fit in the tin. The flakes fall apart easily. I just folded and stuffed without any dry time. The flakes light right up and don't require any relights, or at least not many. Nice fine smooth grassy/hay taste. There's perique here, but it's not very peppery. Overall an easy-going smooth smoke. So what's missing? You have to search for the Lakeland essence. It must have been applied with a very light hand. If you're looking for a light entry into Lakelands, this could do it. If Lakelands are your thing, you'll be left wanting. Overall a nice smooth pipe I enjoyed with a tall coffee early this rainy morning.

When this was released, I quickly ordered 10 tins, as I enjoy both Va/Per.’s and Lakeland blends. What arrived was quite good, but not exactly what I was expecting. Hansom Flake is a tasty Virginia/Perique Flake with a very mild baking cocoa topping. I don’t get any of the floral Lakeland essence that was promised, at best it smells like it was briefly stored in the same room as something like Grousemoor. I do enjoy this and I’ll keep the rest of my tins, but I won’t be buying anymore, unless it ages in an unexpected way.