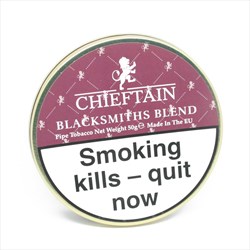 This full bodied English mixture is carefully crafted for the experienced pipe smoker. In this artisanal blend Virginia and Turkish tobaccos are harmonised with Latakia and a touch of perique to create a taste that is rich, spicy and satisfying.

After a few weeks of smoking mostly VaPers and Virginias I really fancied a fuller English. Because there wasn't any reviews on this I had to open it 'blind' but I'm glad I did; it's a stalwart and tasty smoke!

Removal of the lid gives a good inclination of the forthcoming smoke. Latakia and Turkish take lead of the aroma, making for a smoky yet sour tin-note. The other tobaccos struggle to gain attention as they don't have enough piquancy! The ribbons are fairly uniform in size, not too fine, and there's more dark browns than lighter browns. Moisture? Slightly damp but that suits me!

The very first puff was enough to attest that it's one for my favourites list! Synonymous to the aroma, the Latakia and Turkish take prominence over the other leaves. The flavour's smoky and slightly fragrant. But, this doesn't mean the others are nonexistent, no, no! I suspect there's more than a pinch of Perique as I get a very conspicuous spiciness which could only emanate from this! The Virginia acts like a platform for the blend; although not a pungent flavour it fills out the smoke. The burn from it's as good as it gets! Steady, even, reliable, and cool. There isn't a bite to be had; to my palate.