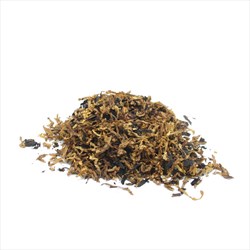 This is a bulk blend, supplied in a baggie inside a box, but unlike other bulk blends it can only be bought in 100g amounts. So, there's no opportunity to buy a lesser amount to just sample; if you don't like it you're stuck! Luckily I like it!

It's made mostly of brown ribbons, with just a smattering of black. The aroma immediately implies cherries, and the moisture's decent; but, seeing as it comes in just a box, it's been breathing!

The cherry flavouring leads the additives, but it isn't too sour or acerbic; mild and sweet. The almond and vanilla give a nutty, creamy, backing to the cherries, definitely preventing any bitterness. The tobaccos create a 'lighter' style of aromatic. It doesn't have a clotted black Cavendish character, but a meeker VaBur and sweet Cavendish one. It burns steadily, only requiring moderate tamping, and gives a fairly cool, bite-free, smoke.