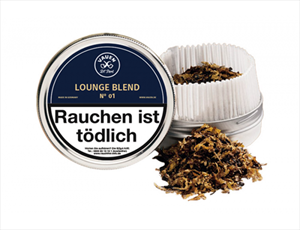 A balanced blend of black cavendish, Virginia, burley and Virginia flake, complemented and refined with an attractive aroma of plum, vanilla and rum. The redolence is fruity, but not intrusive. The different cutting widths of the tobaccos lead to a uniform burning.

Every now and then a real horror comes along, usually in the form of an aromatic, with the description listing various toppings/flavours, in this case, plum, rum and vanilla.

The horror isn't just confined to the mustard gas-like smoke, oh no. You open this little beastie and you are washed with a sea of sickly sweet aromas such as you find in one of those floral sprays you get for the bog. It just isn't enticing, it really isn't. I have jarred it and left the top open 6 feet away and I can still smell it.

The tobacco itself looks much like a standard Danish, with gold, brown and very black short strands that glue together as you dig this stuff out. The smoke is horrendous. It's like being poisoned by noxious fumes that make you cough and splutter. It's like being drowned in cheap perfume. I ploughed on doggedly trying to see if this blend would give me something to like, and there was nothing there, no tobacco taste at all, the whole brew being overshadowed by this ghastly wave of yankee candle-like fumes.

I never give up on a blend, and never bin one, but this one came close. In the end, as I mentioned earlier, I decanted the foul mixture into a tobacco jar and labeled it Aro XXX. It might be discovered in a few years time at the back of the cupboard along with the evil Jirsa, Sunday Fantasy and Meine Mishung Rot, just in front of the Captain black. When the 'I fancy an aro' moment comes on me it will remind me just how awful it was. It might improve with age, who knows, but somehow I doubt it.

Footnote. After letting this 'breathe' for a few days in a tobacco jar, this became palatable in small quantities, and I may have been a little harsh on it. Even so, I'm leaving the single star for the moment and may upgrade when the mixture is finished.