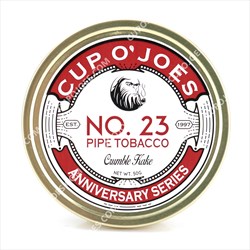 Notes: Celebrating 23 years online, Cup O' Joes has partnered with Sutliff & their customers to create their new Anniversary Blend No. 23 - a Virginia/perique crumble cake - with two beautiful 2.5" x 2" 0.25" cakes ready to be smoked right out of the tin. This blend is an old fashioned pressed crumble cake made with the perfect combination of black cavendish, red Virginias and an ample amount of perique. The tin offers notes of spice, fig, a slightly fruity undertone & traditional red Virginia vinegar scents.

The tangy, earthy, woody, lightly floral, very dark fruity, bready, light notes of sugary stewed fruit, slightly spicy, matured, fermented red Virginias are the lead components. They also sport very light touches of lemon, grass, vinegar and acidic sourness. The rather spicy, raisiny, plummy, perique is an important supporting player. The unsweetened black cavendish provides a little smoothing sugar in the background. The strength and taste levels are medium.The nic-hit is just past the center of mild to medium. Won’t bite or get harsh, but it does have a light rough edge here and there. This mildly moist crumble kake easily breaks apart to suit your packing preference. Burns cool, clean, and a little slow with a sweet and mildly savory, deep, consistent flavor from top to bottom. Leaves little dampness in the bowl, and will require some relights. Has a very pleasant, mildly lingering after taste and room note. Can be an all day smoke for the veteran, and repeatable for the less experienced.

A thoroughly delightful smoke! In fact, after my first few puffs I ordered more!

As it says in the description the tin holds two pieces of kake. Dark kakes which have great hydration; for me, a touch damp but not wet. The blend smells a little fruity and somewhat sour. The kakes crumble with ease.

The red Virginias give the most character; being tart, rich and ripe. This flavour is enhanced by the Perique; having less spice compared to some, and more of a full bodied, succulent, fruity style. There is, also, a vinegar-like flavour which presents itself toward the finish from the Perique. The black Cavendish thickens the smoke, but doesn't give much flavour. The speed depends on the prep', but I crumble it quite thickly, making it burn fairly slow. The temperature's cool and it hasn't got a bite in it; to me!

The presentation, tin note and taste were all very well reminiscent (to me at least) of the most recent Sutliff crumbles. While the 23 kake is not quite as supple in crumble as the Sutliff kakes, the red Virginia's in No. 23 are very much evocative of the Sutliff Red Virginia Crumble Kake (that is to say -- and dare I say it -- ethereally McClelland-like). Indeed, No. 23's tin note was closer to that of the Sutliff Red Virginia Crumble Kake than it was to the Sutliff Va-Perique Crumble Kake. The tangy red Virginias, as well as the Perique, start off with the expected fermented fruit(iness) & spice notes (respectively), while there is a sourness that creeps in and thusly intensifies incrementally the further down the bowl you go. In any case, Anniversary Blend NO. 23 is a delightfully piquant blend that burns admirably, with a most notable aroma. Nicely done.