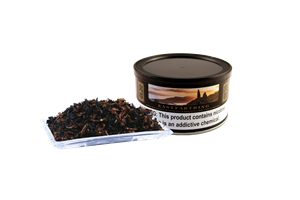 The smoky, woody, earthy, lightly floral, musty sweet Cyprian Latakia is the primary component. The tangy dark fruity, earthy, woody, sugary red Virginias take a small lead over the nutty, earthy, woody, lightly cocoa-ish, sugary stoved burley. Here and there, the burley is a touch more obvious, and almost competes with the Virginias for attention. The vanilla topping has a slight alcohol companion (I sense whiskey), though I didn’t find it distracting, and it’s mostly in the smell of an open tin, and not in what you taste to any real degree. It mildly tones down the varietals, and mostly eliminates potential rough edges. The strength almost reaches the center of mild to medium, while the taste threshold is a step or two past that center. The nic-hit is a rung lower than strength level. There’s no chance of bite or harshness even when pushed. The tobacco is lightly moist, and needs no dry time. Burns cool, clean, and slightly slow with a mostly consistent, sweet and lightly savory flavor from top to bottom. Leaves little moisture in the bowl, and requires just above an average number of relights. Has a pleasantly lightly lingering after taste and room note. An easy going all day smoke. Three and a half stars.

When I first smoked a pipe, I started out with aromatic blends. Yet, like many pipe smokers out there, I gradually moved onto English blends, then VaPers, Burley, and so on. Over time, my aromatic blends collected dust in my cellar, and I soon gifted my unused aromatics to newer pipe smokers who would appreciate the blends more than I did. I certainly don’t sneer my nose up at aromatics like some out there, but my tastes naturally changed to more complex blends.

Still, I have a fondness for a good aromatic. After all, most of us probably gained an interest in pipe smoking from smelling a codger blend, so I’m always on the lookout for a pleasing aromatic that I can still enjoy. In my opinion, the best pipe tobacco blends on the market combine a pleasing aroma without sacrificing a good tobacco flavor.

I recently picked up a tin of Sutliff’s Eastfarthing, after hearing some of my online pipe buddies rave about the blend. I decided to give the blend a try, though I didn’t pay much attention to what kind of blend it was until it arrived. I wanted to go into Eastfarthing blind and make up my mind on my own. If I had known it was considered an aromatic, I might not have picked it up.

After Eastfarthing arrived, I read the description printed on the label, which read, “Mature red Virginias, stoved burley & aged Latakia with a hint of sweetness.” Red Virginias? Good. Stoved burley? Excellent, I love burley. Aged Latakia? So it’s an English blend. I’m game. A hint of sweetness? Well, I do have a sweet tooth; so don’t mind if I do.

I popped the tin and went ahead and gave the tobacco a sniff. I could smell the wondrous aroma of vanilla, my favorite kind of aromatic. I knew at least the room note of Eastfarthing would be a winner, if nothing else. However, the tobacco in the tin was quite damp, so I put some out to dry overnight to smoke the next day. If you end up trying Eastfarthing for yourself, I highly recommend letting it dry, or you’re going to have a rough time getting the tobacco lit.

The next day, I loaded up my large Peterson XL14 with the dried Eastfarthing and headed out to my garage to smoke. The tobacco still had a tiny bit of moisture to it, even after being out for 24 hours, but leaving it out made it suitable for smoking. Your drying time my vary depending on your preferred method.

The tobacco lit easily in my pipe, and I sat back and puffed away, paying close attention to how the blend smoked. It didn’t take long for Eastfarthing to convert me into a fan. I could taste the aged Latakia in the smoke, solidifying it as an English blend to my palate. Yet like the description says, there was also a definite sweetness in the mix, making it more of a dessert English blend.

Now, as most pipe smokers quickly learn as they take up the pipe, usually the smoker is immune to the room note of the pipe as they puff. However, as I smoked Eastfarthing, my nostrils detected a distinctive change in the air. I removed my pipe from my mouth and took a long sniff to smell what it was.

Ah, there it is, I thought to myself with a smile as I resumed puffing away. There’s that classic pipe smell I’ve missed.

Folks, Eastfarthing smells exactly as a pipe tobacco should—rich, deep, and earthy. It reminded me of all the times I walked by a pipe smoker in the past before I took up the pipe. As soon as I’d smell that warm aroma, I’d stop in my tracks and look for the source. Sure enough, I’d find a pipe smoker, puffing away without a care in the world. Despite having Latakia in the blend, it doesn’t have that campfire smell that some find off-putting, but you will taste it.

The name Eastfarthing comes from a location in the Lord of the Rings books, and I think it’s an appropriate title. This is the type of tobacco I can see hobbits, dwarves, elves, and men all keeping in their pouches as they travel Middle Earth. I know some pipe smokers say Eastfarthing reminds them of Frog Morton Cellar. I never had the chance to try Cellar, but it reminds me of another LOTR style blend that’s sadly disappeared—Just for Him’s Shortcut to Mushrooms. As much as I liked STM, I’d wager to say I actually like Eastfarthing a bit more. For me, it’s a bit of a richer smoke than what I remember of STM.

Eastfarthing is a complex blend, and Sutliff should be commended for their work. This is a pipe tobacco for absolutely everyone— both the smoker and those around them. The flavor is full of sweet English goodness while still retaining that classic pipe smell that reminds non-smokers of favorite pipe smoking relatives.

So if you’re in the market for a blend that manages to combine the best of an English blend and an aromatic, I highly recommend you take a long holiday to Eastfarthing.

Ahh Eastfarthing. For anyone looking to crossover to English or for something less Heavy on Latakia this may be what you are looking for. Right out of the tin you get a wonderful aroma of vanilla and creamy nutty burley. The Latakia for me was barely noticeable. It packs well and was a bit moist for my taste but required no extra attention to light. Smokes to a coarse grey ash with no moisture left. No tongue bite detected even when pushed. Could be an all day smoke for some but not me (I prefer blends that are stronger in the nicotine dept.) It is a great blend for beginners.

Age When Smoked: None

Eastfarthing consists of red Virginia, stoved Burley, and aged Cyprian Latakia with a touch of Vanilla (liquor?) topping. It’s a beautiful ribbon cut blend consisting of mostly brown, dark brown, and black tobaccos with the occasional bright golden ribbons, too. The moisture content is as close to perfect as one can get. After opening the tin, one would probably need to jar it so it doesn’t dry out too much.

The first thing I get from the tin is a deep vanilla scent — like a french vanilla. And maybe just a hint of cocoa that adds to the depth of the vanilla. Then there’s a deep, damp, earthy smell. I really can’t smell any of the Latakia. Overall I find the tin note very pleasant.

As I found the moisture content to be spot on, I didn’t let it dry any before loading my pipe. Of course, there might have been a very slight drying to it since I popped the tin the previous afternoon, but I really couldn’t tell it. I smoked this in my Peterson’s Mark Twain; it’s a System pipe. Eastfarthing packed well and took to the flame without issue. There were no issues with neither the charring (or false) light nor the true light.

The taste was nice, too. Nothing too harsh; a mild to medium taste that was similar to the tin note but only barely. I got some wafts of incense from the Latakia that were all but absent from the tin. Comparing this to their 504C, I would say 504C is stronger in the flavor department with more Latakia coming through.

The nicotine feel is very mild. As I was smoking this first thing in the morning with only some coffee as my companion, I was expecting more of a “nic-hit.” I’m pretty much a lightweight when it comes to nicotine so I was expecting that familiar, but unwanted, dizzy feeling — it never visited me. There’s virtually no tongue bite or harshness with this blend.

Eastfarthing burns down to a nice white ash with virtually no moisture in the bowl. All in all, it’s a mild to medium blend which could very easily be an all day smoke.

I am participating in the Sutliff Virtual Pipe Club tasting this blend as I speak. I received this tin from tobaccopipes.com about a week ago who is sponsoring this event. Upon opening the tin, I am greeted with a strong pleasant somewhat vanilla liquor smell. This is a coarse ribbon cut with dark, medium brown and a little light tobacco in the blend. I will have to agree with some other reviewers in that this tobacco is extremely moist but I did not allow any drying time. I have read more than one review mentioning Frog Morton’s Cellar. I smoked a few bowls of the frog about a year ago but too long ago to try to compare. Not sure if this was blended to be similar or not but I am reviewing on its own merits. Second bowl, be right back. It is cold, dark and rainy out on the porch and this is California. The second bowl started to grow on me now that I know what to expect and enjoyed it more than the first one. The boss says she likes the room note but not in those words. She says it reminds her of food, I said it is probably the vanilla. It is a good blend, I enjoyed it with my coffee and was a good choice for the evening, very mild in the nic department. If you really like aromatics give this one a try and thanks again to Sutliff and tobaccopipes.com. Smoked good in my Meerschaum.

One of the best 'mild English' blends I have ever had the pleasure to smoke. A bit moist when smoked from the tin - so take it slowly and enjoy the sweetness with a wee touch of Latakia. Holds it's flavor throughout the bowl from start to finish. This will be a staple in my rotation as I will surely be buying more.