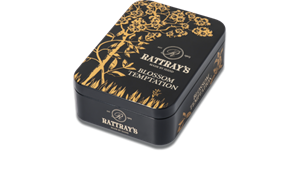 I got this blend, Peterson's Summertime 2020, and Kohlhase & Kopp's Asia 2018 (which TobaccoReviews won't let me review since that blend apparently hasn't been approved by a moderator yet) from a friend in Southeast Asia since they're very hard to find in the US. They're all amazing.

This one comes in a rectangular tin instead of the round tin that most of us are used to. It's a beautiful box... but the tobacco dries out since it isn't air tight. I had to re-moisturize just a tad before smoking. The tobacco looks great though, with what looks like very light Virginia and slightly darker red Virginia mixed with the Black Cavendish. It's not at all oily to the touch either.

Opening the jar after moistening it a bit, the smell is refreshing. It's fresh and summer-y, very natural. It doesn't have the overpoweringly "fake" sort of smell that many aromatics have. First few puffs... the slightly tangy blackcurrant is the main aromatic flavor, and the cherry is more in the background. But they both share the space nicely with the tobacco, particularly the sweet Virginias. Not much changes over the course of the smoke. The flavorings do fade slightly as you get toward the bottom, but not by that much.

Bottom Line: I love this one. I wish more blends like this were available in the US. From what I understand, the manufacturers think this lighter, fresher blend is a more European flavor profile. Whatever it is, I love it. I hate to have to spend a ton of money shipping it in from Malaysia, but until I find a closer source, that what I'll have to do.