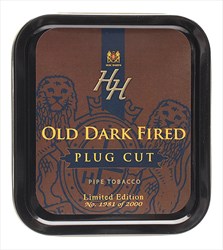 Notes: For a limited production run, exclusive to Smokingpipes.com, Mac Baren presents their popular HH Old Dark Fired flake in a plug cut, available in a select quantity of two thousand serialized 50 gram tins. The blend still features the same well-balanced union of dark-fired burley and flue-cured Virginia tobaccos, mixed and heat-steamed both to fortify and better marry the tobacco flavors. In a plug cut, though, Mac Baren skips the flake cutting process. Leaving it as a plug allows the blend to be more easily transported, without the risk of crushing already cut flakes, as well as gives pipe smokers the freedom to slice the plug in accordance with their own preferences — all while maintaining the robust, earthy flavor that has made this blend a staple of Mac Baren's esteemed HH line.

This plug is obviously much like the flake and ready rubbed versions, but there are a few differences, which I will note. The main component is the earthy, woody, floral, spicy, fairly dry, mildly tart and more tangy sour, nutty dark fired Kentucky. The earthy, woody, tangy dark fruity, mildly citrus sweet Virginias, and earthy, woody, nutty sweet burleys are secondary stars. The natural sweetness of the varietals are enhanced, and the taste is a little more well rounded with fewer rough edges than the earlier productions by how this is processed; a typical characteristic of plug versions. It is just a little less strong than the other offerings as it crosses over the medium mark by a couple of steps. The taste level is a rung more potent than that, and is nearly equal to the earlier manufactures mainly because the vinegar and McClellandesque barbecue are a little hardier here, though they very mildly weaken after the half way mark. The nic-hit is a touch weaker, and barely reaches the medium threshold. You will notice every aspect of the well balanced, harmonious complexity of its very consistently sweet and savory full bodied flavor in virtually every puff. Won’t bite. The plug has some density and moisture, but is fairly easy to break apart to suit your personal preparation preference. I did not feel the need to dry it, but some smokers may feel differently. Burns cool, clean, and slow. Leaves little moisture in the bowl, and needs a fair number of relights. Has a pleasant, lingering campfire after taste and stronger room note. Unlike its predecessors, this could possibly be an all day smoke for the very experienced veteran.

I will start this review by saying I am no JimInks so this won’t be a review where I use something like ‘the Kentucky is a little deeper flavored with a touch more earth and a little spice. The bright Virginia is citrusy with a touch of grass The molasses topping is mild”.

Nor am I as well read in the long list of tobaccos that say Pipestud has had comments on either. I am just your run of the mill pretty much daily pipe smoker going on about 5 years now. Those two are great and by no means do I rank myself with them nor do I mean to slight there reviews, I love to read them all.

That said I have grown a appreciation for this line of tobacco and when I saw it was available I had to grab a couple of tins ASAP. So my first impression of this tobacco is what I am going on and will update this in the future as we go.

The presentation on this is perfect. When you pop the tin you are welcomed to a wonderful gold foil encasing a deep dark plug with mostly dark color and very good moisture. The aroma when open is of fine tobacco with an almost blackstrap scent to it. There is a deep smoky sense to it that reminds me of some of the smoke at the best BBQ shops in KC.

Cutting it is one of the highlights of my day as it stays firm and gives you just the kind of resistance that makes you earn your reward. It probably does not lend itself to fold and stuff but you can easily thin slice it for an easy rub out or chunk it up and gravity fill.

Packing is fairly easy and unlike most I did not let it dry out before I did my fill and light. Using a char light, followed by a small tamp, then relight followed by building a dome and letting it sit 5 minutes before jumping into a full on smoke.

Flavor, first of all abundant and sweet with the smokey essence coming on very well but not overpowering. The flavor stayed steady throughout but was not monotone at any time. The flavor lasted through relight and remains even after the bowl was finished and I cleaned out my pipe.

As someone who has gravitated toward Latakia in the past, finding dark fired tobaccos has been a fairly recent find for me and as a layman I can’t say enough about this unique take that Mac Baren has with this one.

My only regret is just ordering two tins so hopefully I can grab more before Smoking Pipes runs out. If your a friend to dark fired tobaccos in general I would recommend this one.

Age When Smoked: New right out of the can.

The plug isn't one which is borderline kake, it's a proper, solid plug; think 3P's or Revor. As expected, dark in colour. After wrestling the 'brute' of a plug, slicing, grinding, sweating, screaming, I filled a bowl and it blew me away!

Just like the flake version the Kentucky and Burley outweigh the Virginia. But unlike the flake it isn't quite as headstrong. Maybe being compressed into a plug since 7/15/19 has enabled the flavours to 'chill'! So, as the leading taste is rustic, VERY rich and smoky (smoky but not quite as sharp and 'fiery' as the flake) this doesn't leave much room for the Virginias. I know they're present as it says so (!) but I struggle to identify them. It burns nicely, fairly slow making it a good smoke to sit and muse about life with! Bite? Not a jot!

Nicotine: above medium. Room-note: not great!

HH Old Dark Fired Plug? An exceptional blend, albeit a travesty that there was only 2000 tins made! Highly recommended:

I picked up a couple of the limited edition tins when they came out at Smokingpipes.com as I enjoy ODF and wanted to see the difference a plug might make.

The tin note was the same to me as I'd expect whenever I open a jar in my cellar of ODF. Dark rich flavor. The plug was solid but could be picked apart by hand which I found interesting. To prepare, I sliced off a chunk and then cube cut it. After loading the pipe with these, I broke up a few cubes further for "kindling" on the top.

As prepared, I found the flavors to be the same as regular ODF ... burley forward with teases of the Virginias hiding in there in little sweet notes. The Kentucky gives a nice smoked flavor to my taste. The cube cut burned faster than the regular flake load or even the ready rub. The strength to my taste is full to strong and this is one I don't smoke bowl after bowl of.

So is the PLUG better than the other styles? I like it as it allows you to prepare it as you like. It also looks great as a plug. Is it something I'd go out of my way to get in the aftermarket, no. The regular ODF's fill this niche in my rotation.