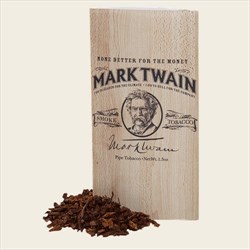 From PipesAndCigars.com: "Mark Twain loved to smoke his corn cob pipes. Although there's a lot of conjecture as to what kind of tobacco he enjoyed, it was almost certain that some of what he smoked would have been a burley blend. So what better way to pay tribute to the esteemed author than to put his name on a comforting semi-aromatic pipe tobacco. Mark Twain pipe tobacco is made of rich, ripe burley along with some bright Virginia, finished with a top note that creates a pleasant room note, and a slightly nutty sweet flavor that you can enjoy at any time of day. So load up a cob, sit on the porch and put your feet up and light up, just like Twain used to do."

I threw in a couple pouches of Mark Twain original with my last pipesandcigars.com order. Thought I needed to broaden my horizons after smoking a lot of English and Balkan blends.

In the pouch I detect notes of coconut and vanilla. Some reviews elsewhere note a whiskey topping, but vanilla and coconut are the major notes found in straight bourbon, so maybe whiskey.

The description of this tobacco categorizes it as an aromatic. However, the flavoring isn't on the same level as you might find in some of the more in-your-face aromatics. The pouch notes are nuanced, balanced, and mix with tobacco aroma so that the initial impression is well-crafted use of casings and top notes.

The blend smokes in a balanced manner also. The burley is balanced with the virginia to produce a creamy, dense smoke that doesn't bite the tip of the tongue or the mid-palette.

I taste brazil nuts, coffee, hints of caramel and a touch of tartness. The character of the smoke is relatively constant through the bowl, with notes of cocoa appearing about halfway. A little black pepper shows up about halfway through, but not overpowering, and a nice change to note during the smoke. While the pouch note has vanilla and coconut, neither of these flavors are tasted.

This tobacco is a nice, easy-smoking experience. Pairs well with most beverages, hot or cold, alcoholic or non-alcoholic.