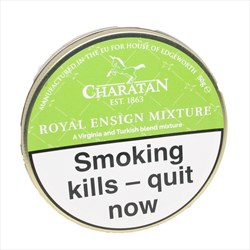 A traditional English mixture that sets the standard. The finest grades of Cyprus latakia and Oriental tobacco from the Mediterranaen are blended with flue cured grades from East Carolina and Georgia and lighly toasted in dry drums to enhance the flavour. A good alternative to Dunhill's Standard Mixture.

My traipse through the Charatan substitutes for Dunhill is starting to seem a bit less worthwhile now that the Dunhill baccies are back under the Peterson moniker. All the same, I'll continue with what they suggest is similar to the Standard Mixture, an old faithful for when you want an English mixture with no excesses, no quirks and no pretensions which will provide a bowl of smokey contentment. I don't think the Charatan blend fits that bill, as you will see, but it's a decent smoke all the same.

I opened this as I was finishing a tin of the Dunhill original, as I have been throughout the Charatan experiment, to keep things objective. The tin aroma then is the most striking difference: very sweet indeed: icing, Danish pastries, baklava and a yeasty bread sweetness come pouring out. There is some campfire smoke from the latakia, and I can't detect much Turkish. Overall much sweeter and a little less smokey than SM.

The appearance is similar, ribbon cut, but with a bit of very bright leaf not seen in SM,and rather more large pieces of stem. The moisture content is significantly higher.

It takes a light well, the flavour is sweet, Virginia dominated, with a decent shake of latakia giving a sweet smokiness. Sweet bread, pastries and baklava woven amongst wood smoke are the main things suggested.c The Turkish is very subtle in the background, bulldozed by the sweetness whereas in Standard Mixture it was an equal and balanced player with the other components. Perhaps this blend is akin to sipping a very sweet black tea while enjoying pastries sat right by the bakeries wood oven.

It won't bite, smokes to a little dottle without too much attention and provides almost enough vitamin N.

Overall, this is not Standard Mixture. It is less refined, less balanced, and a lot sweeter. Enjoy it as a new English Mixture in its own right, its OK. To me, it doesn't fit any particular requirement, I usually like more Oriental in a mixture, so I might not buy it again.

I'm not really in a position to draw a comparison to the antecedent Dunhill Standard Mixture having not smoked that for a few years. However, a few of the reflections here depict Standard Mixture as being either well balanced or lead by the Virginia; making this not a million miles away!

The blend, although prominently made of ribbons, includes a few broken flakes. The nose doesn't suggest a Lat Bomb, it's indicative of a very mild English, one that's heavier with Virginia. My moisture was perfect, ready to smoke straight away.

The smoke corroborates with the impression I got from the aroma. The sweet, rich, Virginias are the 'driving force'. The Latakia has a woody flavour, but doesn't monopolize things with a WHACK of smokiness! The Orientals add some character, albeit a light one. Don't expect a camphoraceous, perfumed, 'floral' taste. They season the smoke, in a delicate fashion. I get a fairly cool smoke, which doesn't bite.