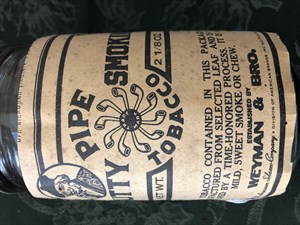 Notes: Cutty Pipe advertised itself thus: "Cutty Pipe is an old friend of many thousands of men who know good tobacco when they smoke it or chew it. Cutty Pipe is manufactured from selected burley leaf--the best that Kentucky grows. It is prepared by a new process--in a modern, sanitary factory--and is absolutely free from impurity. There is no purer, milder, better tobacco sold anywhere, at any price. When you get Cutty Pipe you get the best."

Originally created and produced by Weyman & Bros. Tobacco, it was bought by The American Tobacco Company in 1905.

Purchased via eBay, 3 packets of Cutty Pipe Tobacco of unidentifiable age. Seeing there was a bar code on the paper wrapper the product has to be from after 1972 to 1980(?) as I’m unsure when American Tobacco stopped producing this blend.

The product came sealed in the original paper lined with wax paper. Tax stamp unbroken. “Pouch note” was non existent and the tobacco presented dark with age with an occasional leaf of a light brown nestled in a cigarette type shag.

Tobacco was a little past dry, although it didn’t crumble when pinched it definitely did not stick together. Rehydrated in a stainless steel bowl with a sheet of RO water dampend paper towel, twice. Tobacco absorbed well and would cling when pinched.

Product was transferred to a mason jar and jar note was of earth, dark earth. Loaded a half bowl in a Chacom Cutty shaped pipe.

Initial light released a slightly spicy dark tobacco flavor that progressively lightened to last 1/4 of bowl and shifted to deep hay sweetness. Was completely surprised by the flavor shift and this sweet hay flavor remained to the bottom of the bowl.

Next day jar note was a mix of earth and deep burley as the shag cut stabilized its moisture content. Loaded a full bowl of a Savinelli New Art Billard. Where the spicy notes emerged at false light and then remained until mid bowl with a continual mellowing towards a light hay sweetness that coated the mouth with a pleasant earthy hay flavor.

Tobacco, due to the shag cut burns hot, but that didn’t translate to the smoke as it remained cool in the mouth. Am a bit baffled by the hay middle bowl sweet hay flavors as this is marketed as a pure burley blend with no stated topping, so I’m assuming that the tobacco was well cased. Retro Hale bring in the strongest taste of hay sweetness without the expected burley nuttiness.

Overall impression is that this was a top notch blend of burley cased beautifully with no top coat. I was surprised that there are no Virginia’s in this blend as the last half to the bottom of the bowl was pure Virginia flavor.

I can not comment on room note as I smoke strictly outdoors, but the Mrs did complain on the first day that it was not a very good smelling blend, but by day two she smiled and said that smells good.

I do not know if the excellent quality of this tobacco is due to the age of the tobacco but this blend has everything I have been looking for in my Virginia flakes. Hay sweetness with an occasional earthy back ground that leaves a muted sweetness in the mouth. Good smoke output but burns fast due to the cut of the leaf.

Looking forward to anyone reviewing this tobacco from memory or any further insight into the tobacco’s casing. This blend is so good 30-40 years in the pouch that I lament that it has gone out of production and have yet to find a blend as good as this in the current market.

Age When Smoked: 30-40 years in wax paper and paper pouch

Similar Blends: None that I know of but any Virginia blend’s sweet spot.