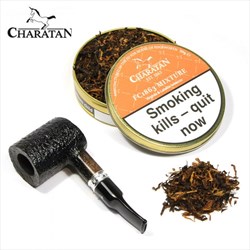 This blend pays tribute to Frederick Charatan who founded Charatan in 1863. Generally a full bodied, smooth, rich and balanced smoke, full of nice tannins, with a clear smoky base due to the premium quality of Latakia tobacco in this fine mixture. Overall the taste notes are woody smoky, tannin and spicy.

Charatan's answer to Dunhill Baby's Bottom, a blend I wasn't hugely enamored of, but appreciated for what it was, a mild to medium English with only Virginia and Latakia. The Charatan substitute seems to fill the gap quite nicely.

The tin is full of assorted coloured ribbon, slightly on the moist side. The aroma is mild, very mild: some bready Virginia and a hint of Latakia smoke. Packing and lighting is a doddle, the Virginias invite the flame down greedily and you're soon puffing away quite happily.

The flavour is very mild from the start, toasty and bready, the usual Virginia fare, with moderate sweetness and a background of charcoal smoke. It gains some density towards the end of the bowl, and like its Dunhill inspiration, it's much better in a large bowled pipe. In fact, I'm smoking it in a colossal German porcelain right now, a pipe I rarely fire up due to its absurd capacity, and its splendid!

There is no bite, and in a Meerschaum there needn't be much if any dottle. The nicotine is on the lower side. I think this is an acceptable replacement for Baby's Bottom, but would like to hear the opinion of anyone who was a more regular smoker of that tobacco. A mild to medium English that will probably come into its own in the summer months.

Pipe Used: All my largest ones!

Since the fall of Dunhill I've been impressed with the 'remakes' from Charatan. Sure, some aren't identical, like their take on Navy Rolls, with a Cavendish core. But although not an exact copy that was still a smashing smoke; in it's own right! This is offered as being their version of Baby's Bottom 1938?

The appearance and aroma are like BB 1938. The blend's made from medium and dark brown ribbons, the smell isn't overly strong with Latakia and a high point, for me, is it being a touch moist.

I love the smoke. Like I found with the original, it doesn't give a 'whack' of harsh Latakia. The Lat accounts for a formidable flavour, but offers a weighty, heavy, almost 'clumsy' and languorous character rather than a flavour of wood and smoke alone. The Virginia's definitely riding shotgun. From it comes a fruity sweetness, a sort of doughiness, but I get none of the hay, grass, citrus Virginia nuances that are commonplace. It burns nicely, steady and cool giving a bite free smoke.

Nicotine: below medium. Room-note: quite nice.

FC 1863? To me, this has EXCELLENT quality Latakia in it. It's a belting smoke which does justice to a full score, easily. Four stars: