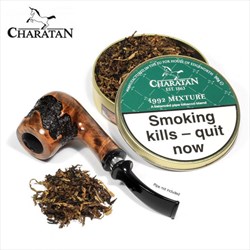 Charatan 1992 Mixture is similar to Dunhill My Mixture 965. This English blend contains Orientals, Virginia, latakia and cavendish. The cavendish brings sweetness to the mix in a way that Virginias alone can’t. There’s a nutty brown sugar soul to this smoky, spicy tobacco. An amazing sweetened variety of English that is just perfect for after dinner smoking.

Another I've been reviewing for the UK tobacconist McGahey's.

Says it's similar to Dunhill 965? Hmm, that has had 255 reviews here where it received 4 stars. So, that could be a grandiloquent remark! As it's been awhile since I piped 965 I'll use my memory and comments here to paint a picture! But, considering the fact I've had a head injury in the past, my memory can be sketchy ;)

The appearance is similar, but I don't recollect 965 having as many coarser, pieces of broken flake. It includes about the same quantity of varietals, the hydration's good, and the aroma's smoky but fruity-sweet.

Once lit the standard of the smoke is congruent with the original; high class. As was the case with '965 it isn't a Lat-Bomb. Instead it's well rounded and flavoursome. None of the leaves are too preeminent, instead they work together well. The Virginia, rather than having sharp citrus, has a note of rich dark fruit, and the Cavendish lends the flavour a touch of honey. The Orientals and Latakia, rather than selfishly consuming the profile with an acerbic smokiness, give a bit of toast, nuts, and plenty of spice. I can't fault the burn, the smoke which is generated sits at the lower end in temperature, and I haven't been bitten once!

Nicotine: maybe a jot above medium. Room-note: not bad.

1992? As I recall, 965 was a fairly inimitable English, rather sweet and spicy. The same goes for this: it isn't a 'smoky' English, but sweet, spicy, and quite different. The new Charatan blends have impressed me, with 1992 being no different. Highly recommended:

I was getting a bit fed up sampling these Charatan blends. Few resemble the tobacco they claim to emulate, and a couple have been really dreadful. However, 1992 is much closer to the mark, and were it not for the fact that Peterson have revived the original, I'd say I'd buy this again.

On cracking the tin the aroma not unlike 965! Smokey, sweet, leathery, with a modest amount of the yeasty fermented leaf mould aroma. That particular fermented part of the aroma I love in the Dunhill tobaccos, it always means you're in for a treat and so few other blenders manage to capture it.

Appearance is similar to 965 but as noted with pieces of broken flake. It has a less even cut, with some big pieces of leaf,and some flecks of very bright leaf not seen in 965. The moisture content is fine, on the drier side.

The favour from the start is smokey and enjoyable, very similar to 965 but more astringent like stewed tea, slightly less creamy and less smooth. Leather, wood and a hint of spice back up the central smokiness, with some rich sweetness. The flavour builds in intensity throughout the bowl, without much development or variety. Finally, it is at least as strong as 965, perhaps stronger.

So in summary, a reasonable copy of 965 with plenty of strength and flavour, slightly lower quality production evidenced in the cut and presentation, and less creamy smoothness from the Cavendish. Not bad.