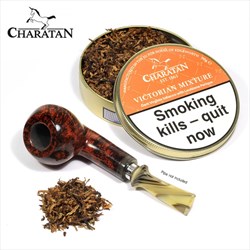 Charatan Victorian Mixture may be of a different time period but it commands the same royal dignity. Pure Virginia and perique tobaccos, unadulterated, pressed and ribbon cut. Prim and proper.

As I've mentioned before I write for the UK Tobacconist McGahey's. They sent me 'Victorian Mixture a few days ago and like the other new Charatan blends I'm not disappointed!

Often billed as a replacement for Dunhill Elizabethan Mixture?

It's made of mostly medium size ribbons but a closer look reveals a few small broken flakes. The mixture includes every shade of brown, from light to dark and the moisture's good.

It gives a high quality VaPer smoke. The Virginia forms the platform, giving the usual hay-like flavour, but the Perique gives an immense amount of life: spicy, dark fruit, a little sour. The slight sourness has a vinegary quality. There's no mistaking the fact that a decent quantity of Perique has been added. It burns below medium in temperature and I doubt it would bite anyone!

Charatan Victorian Mixture? It's been a while since I smoked Dunhill Elizabethan Mixture so can't really draw a comparison. But, I can happily highly recommend it:

Bought this for the first time yesterday. Am on my sixth pipeful.

Victorian is undoubtedly a good mixture. However, it doesn't seem to me to be like Dunhill's Elizabethan. It doesn't look the same: It's not such a mix of light and dark brown and black. It's more medium and dark brown with occasional flecks of black. It was nice and moist, but not too much so, in the tin I bought.

It certainly doesn't taste the same: it hasn't got Elizabethan's complexity, but don't let that put you off, because it's none the worse for that. Victorian is a very straightforward, honest, full mixture, with an excellent base of Va and just the right amount of Perique to make it interesting without being too tangy or peppery.

This morning I'm smoking a pipeful after coffee, and it is really an excellent baccy for that purpose. Don't let anyone tell you it's not a good smoke for first thing in the morning. It's a lovely, rich smoking experience.

CHARATAN "Victorian Mixture" I got this blend about two weeks ago. I managed to have about 5 -6 bowls already. It is replacement for "Dunhill Elizabethan Mixture". Rights to blends made previously by Dunhill were bought by "TOR Imports". All their products are made in Denmark (I couldn't find what company makes them though). Well, I can't really say is this blend worse or the same as predecessor, but I like it as I used to like Dunhill. It is a VA-PER (Virginia - Perique). Usually you love Va-Pers or you hate them. Myself I like them more and more (I had some issues with them on the beginning, though). Personally I wouldn't recommend VaPers to someone who just got into smoking pipe business. They are spicy and peppery. They will happily bite your tongue if not smoked carefully. They keep you awake. It is the same situation as it is with spirits - you didn't like them first, when you tried them at the age of ... say 10 y.o. by emptying leftovers from your father's glass (remember?). Later though they become nicer and nicer. Charatan VM is a blend of good quality. Good, light Virginia with pinch of Perique (not to much but enough to my taste). Virginia with hay like flavour gives a good base. Perique with its sharpness and sourness works as pepper and vinegar in a salad. I wouldn't smoke it as my first pipe of the day, rather later, but works definitely well accompanied with glass of something strong. Just right amount of moisture straight out of the tin. Very easy to pack pipe with. Lights well but requires to be relighted. It has tendency to make your pipe hot, so puff gently.

RATING: - Strength: medium to strong - Nicotine: rather Strong, but nothing like Night Cap - Taste: medium - Flavouring: none - Room Note: pleasant to me for sure - Would I buy it again?: YES. It is in my daily rotation now

I've smoked this just after a tin of Elizabethan Mixture, in order to compare properly. It's a reasonable match for it, let down only by the icing sugar sweetness that pervades the aroma and to an extent the taste of almost all of these Charatan tobaccos. Is it a casing, or a characteristic of their Virginia leaf?

Tin aroma is icing sugar sweet, with a hint of spice. The baccy is mostly ribbon with a little rubbed flake present, much like the original. There is however a lot more "dross" of crumbs towards the end of the tin of this stuff.

It's moister than the Dunhill product, but not exclusively so, and packs quite nicely. Lighting and smoking is a breeze, and it offers a sweet, moderately rich Virginia experience with just a hint of spice and barely any sour from the Perique. I have to say Elizabethan Mixture was never a favourite of mine, I prefer tobaccos with a bit more oomph and complexity: both this and the original lack the punch of a stout Virginia/Perique and the subtleties of a good Virginia.

It's a nice smoke after breakfast, goes well with coffee, and is a bit cloying on a very hot day. I don't think I'll buy it again.

I've tried both matches of Dunhill Elizabethan available in Europe, McConnell Regent Street and Charatan Victorian Mixture, and I find the latter much closer to the original (al least in its last incarnation before dismission) and overall a better blend. The taste is dominated by the sweet Virginia (maybe there's also a little casing, but no topping detected), but the Perique shows its presence more and more throughout the bowl. The resulting combined taste is very smooth and pleasant. I would say that this is better than the original, which by the way I liked... Highly recommended to VaPer lovers.

I never got the chance to try Dunhill Elizabethan Mixture, so I'm not able to compare this to it, but I can review it on its own merits.

On the hole, this reminds me of Rattray's Hal O' The Wynd, particularly the tin note and presentation. I get a slight whiff of Samuel Gawith Cabbie's Mixture too, although not as pungent or pleasing when it comes to taste or smell.

The Virginias form a solid base, with naturally sweet notes mixed with the usual grass and hay. The perique is very noticeable without being overpowering. It has a somewhat similar mouthfeel to Hal O' The Wynd, for me, but I can't describe it very well. Clean? Cleansing? I would wager there are some red Virginias in here.

It's a decent VaPer. By no means my favourite, and I almost certainly won't buy more of it, but it's easy to recommend and is, overall, a solid blend.

As a side note, I disagree with the price point these are being sold at, at least at time of writing. The price is up there with Dunhill, nearly a full quid more expensive per 50g than most other brands. Riding off the coattails of the now defunct Dunhill makes marketing sense, and I can at least commend them for making a good business decision, but are these blends as high in quality as Dunhill's? No.