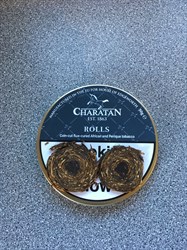 The luxury tobacco composition that is prepared to produce these rolls of tobacco is based on high quality, carefully selected, ripe African flue cured tobacco. The composition is rounded off by using some traditional cured perique tobacco.

This is another I've been writing about for the UK tobacconist McGahey's. So, am nearly through a tin of it!

Almost every website I see this on has it touted as a replacement for Dunhill De Luxe Navy Rolls. Well, to put it simply, it isn't.

The first perplexing feature comes in the way of a black Cavendish centre to the coins. That was Orlik Bull's Eye and Davidoff Flake Medallions territory, not 'Navy Rolls! That aside, the tobacco has a smell of fruit and hay, and a decent hydration.

I enjoy the smoke, a lot. Hence, why the tin's nearly empty in just a few days! It's neither a match for 'Navy Rolls or 'Bull's Eye. Similarly to DLNR, I get a good blast of sharp Perique, but like Orlik 'Eye I get a softening from the black Cavendish. The Virginia forms the base of the blend, offering the usual hay, etc., and being unpretentious. It burns perfectly, manufacturing a smoke which only bites me when really forced to do so; harsh chugs can bite, but with a regular cadence the smoke presents no problem to the tongue.

Charatan Rolls? As I said, this is often offered as the 'new' De Luxe Navy Rolls, which isn't the case. I find it more like a dichotomy of 'Navy Rolls and 'Bull's Eye; the best of both worlds. So, have no problem highly recommending it:

A beautiful curly cut with rolls in the size of a very large coin with a black dot in the centre and a mix of brown and bright tobaccos around it. The moisture is ok for me. The thin rolls break apart as you load the pipe. Lights easily and burns well.

A great smoke indeed. Tasty Virginias with a slight aroma of bread and a reserved, pleasant natural sweetness. They do not offer a wide palette of the well-known Virginia flavours, but what is there, is good. Perique is quite peppery without notes of dried fruit. The amount of Perique is just right. Although it is prominent, it does not cover up the Virginias.

It is said that “Charatan, Rolls” is inspired by the former “Dunhill, De Luxe Navy Rolls”. I agree, it comes rather close to it. The Virginias in Dunhill were more yeasty and offered a wider aroma-palette. Charatan is more robust in the sense of less refined. Still, “Charatan, Rolls” is a very good Va/Per mixture that I can highly recommend.

Age When Smoked: New, out of tin.

This blend, though on the first smoke, wasn't quite as attractive, it took about 3 smokes to fully understand this blend. It was a sour, raisin, dried-plum quality, combined with just enough smokiness from the perique. The room note however is very rich, and fills the room. Though it seems to be well liked. I still feel as though its lacking something, perhaps a certain sweetness to mellow our the sourness from it. A solid 3 stars.

Age When Smoked: New/ Left for a few months in between smokes

The presentation isn't as good as it's illustrious predecessors, rather tatty discs jumbled in the tin. The back core looks rather good though. Can be on the moist side when freshly opened, rub a couple of coins and let them dry on a piece of paper. I press the cores out and layer them in the bowl as I load it.

It takes a light with the greatest ease, the flavour is initially mild but does build as you get through the bowl. Sweet dried fruit, malt and tea give way to woody and eventually some spicy earthy flavours from the Perique. To my tastes there is very little between this and Orlik Bulls Eye, but its not a substitute for Navy Rolls. It's OK, I like both of them, and neither is available now. I think it has a tad more Perique than either of them, and like Bulls Eye, it becomes a tad milder when you reach the Cavendish layers if you pack it like I do.

The burn is even and few relights are called for. A little dottle is left, there is no tongue bite unless you try too hard to smoke the last bit of dottle. It's not the strongest tobacco, but it satisfies.