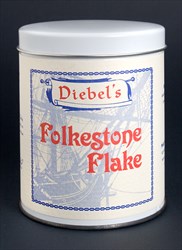 "This true flake cut is left longer in the press to yield more body and a richer color. The Scotch of tobacco."

Sometime in 2016 I picked up Carl Ehwa, Jr's 'The Book of Pipes & Tobacco' (Random House, 1973) and, like many of you, connected the dots after reading the preface/dedication of the book. Many of you already know the connection between the McClelland Tobacco Company and Fred Diebel so there's no need to belabor the point beyond what has already been discussed elsewhere. I soon discovered that Fred Diebel's tobacco retail operation is now called Diebel's Sportsmens Gallery. Diebel's currently operates an internet retail storefront where smokers can obtain several fine pipe tobaccos, cigars and accessories.

Naturally I wondered if there was any connection remaining to the McClelland Tobacco Company; this was in 2016 before McClelland closed its doors. Little more than a seed of curiosity remained, until the demand for McClelland tobacco after its closure made it practically impossible to obtain.

My attention again turned to Diebel's. Were any of the house blends actually re-branded McClelland offerings? The descriptions on the website are somewhat vague so in late March 2018 I requested a tobacco brochure from the manager. Many of Diebel's blends had already been discontinued but one, the Folkestone Flake, caught my attention. Aren't Virginia flakes McClelland's 'de renom' after all? The brochure relates that "[t]his true flake cut is left longer in the press to yield more body and a richer color. The Scotch of tobacco."

I'd put it off long enough. Who else would supply such a dark, rich flake to Diebel's if not McClelland? I ordered an ounce of the flake to be sure. To my suprise it was none other than McClelland's Dark Star (and not its cousin, McClelland's No. 2035 Dark Navy Flake) in bulk. Some experimentation by myself and several others has confirmed its identity by preponderance of opinion and comparison. Naturally nobody was able to wrest an admission of its origin from anyone at Diebel's. A secret's a secret. Of course it was unmistakable. The moist jet-black flakes with the heady acetic aroma. There is no other like it.

Of course after a while word spread. Slowly but surely. First the price jumped up as inquiries to the shop grew, and more recently the Folkestone Flake and all the McClelland blending tobacco disappeared suddenly and completely from the online retail shop. In any case, tobacco is meant to be smoked. Of course there are other reservoirs of McClelland tobacco still waiting out there to be stumbled upon, but eventually they too will be hoarded up like the Folkestone.