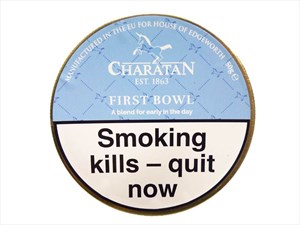 I've smoked a lot of this over the week as I write for McGahey's tobacconist and this was the new blend to do. It says it's similar to Early Morning?

As I remember E.M. was cut finer. This includes some coarser pieces and even a few small broken flakes. I could compare as I have a tin of Dunhill but feel reticent to open it now it's been discontinued! The tin's aroma is one of a mild English, I feel no inclination of a forthcoming Lat Bomb.

Once lit the expectations from the tin-note come true; a Lat Bomb it isn't. The Latakia gives flavour, in a way reminiscent to E.M.: not sharp, harsh, or cutting, but mildly smoky. The most flavour comes from the Oriental leaf, with the red Virginia taking the back seat; because it lacks pungency the VA would have needed to have been added with more weight to gain recognition. It has an uncomplicated burn; hardly any relights, little tamping, mid-speed, generating a cool, bite-free, smoke.

Nicotine: mild for an English. Room-note: not great!

First Bowl? I actually prefer this to how I remember Early Morning. So, will give this four stars:

As with the other 3 Charatan replacements for Dunhill which I've tried, I find this mixture to be better than the original - in this case, far better.

I found Dunhill's EAP to be just about unsmokeable. Horrible flavour. First Bowl, however, is a mild but full English mixture with a slightly liquorice edge to it. Very agreeable, very satisfying. All the Charatan replacements seem to be produced by a very mature, thoughtful blender, who really knows what he's doing.

Another Charatan blend, this completes my tour of their Dunhill substitutes. Some have been OK, some have been awful, very few have been close to the originals and I rather think I'd have enjoyed them more if they hadn't tried to claim the "substitute" ground rather than just introducing a new selection of tobaccos. First Bowl claims to be a replacement for the lovely Early Morning Pipe, an old favorite of mine which was always a pleasant way to wake up the tastebuds gently on days when I have the luxury of a pipe before breakfast.

First Bowl is visibly different in the tin, the cut is less even and tends toward a wider rougher cut, with bits of broken flake not found in the EMP. It's a mix of bright to dark leaf, and the aroma is woody, incense like and subtly smokey, with that dreadful icing sugar sweet aroma which every Charatan English Mixture seems to have. I don't know if this is a characteristic of their virginia leaf or if they case with a lot of sugar water, but I find it pretty offputting. There's just a hint of a yeasty bread aroma.

It takes the light with ease, and the flavour is immediately richer than EMP. This blend seems to possess much more Turkish with it's incense like flavour and aroma, which is very pleasant, but a far cry from the extremely delicate and subtle virginia based EMP. The flavour continues to build, with smoke and wood playing in amongst the incense - any contribution from the Virginias is lost in the intensity of the Orientals. The strength is moderate, but the flavour is fairly full - I'd put this blend at the lower end of medium for an English Mixture rather than considering it a mild one, for comparison EMP is a decidedly mild blend with some spice and zest from the Orientals and Latakia.

You can smoke this down to a smidgen of ash, it won't need many relights once it's started to dry out a bit (it does come a little damp). The room aroma is quite a lot stronger than EMP and those close to me have commented unfavourably on it.

In summary, this is a new English Mixture, Oriental dominated, at the lower end of medium. It's not EMP.

Similar Blends: EMP? Not much..

Beautiful blend. Perfect ribbon cut, loads easily and stays lit even after the charring light, one tamp and away you go. Do not be put off by Latakia being one of the components, it is skilfully added to the Oriental, red and light virginia leafs to provide a mild smokey English taste, and still allowing a balanced bite free experience. This blend by Charatan is much better than Dunhill Early morning pipe. It leaves a very nice aftertaste with a friendly room note. First class,

Purchased From: Tobacconist in Leicester

First bowl of this First bowl by Charatan. Sipping it on my terrace, 10 am of a Sunday. I wasn't a big fan of EMP...but this is another stuff. Light but with a delicate taste, perfect with a morning cup..Elegant, and balanced. Charatan is scoring high with this as well as with its excellent Rolls. 4 stars.

By far my favorite blend from Charatan so far. And I hate Early Morning Pipe — at least the STG one. I also strongly favor VAs and Vapers. And Charatan does have at least two great VA/Vapers so this says a lot about how good I think this blend is. There are elements that definitely remind me of EMP. Mostly the lats. But there is an underlying sweetness that really tied it all together. It has everything I thought was missing from EMP. EMP falls flat and the lats are sharp without balance. The lats on first bowl are sharp in the same way but there’s a lot balancing it, making it more layered, interesting, and satisfying.