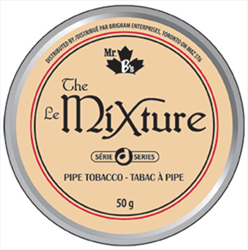 Notes: This tobacco is part of Mr. B's (Brigham) "D-Series", introduced in 2009. Reminiscent of one of the world's top brands, this pipe tobacco is a perfect replacement for an established favourite. If you like the famous Dunhill blends, you will appreciate the all new Mr. B's D-Series.

Please login to review this blend.