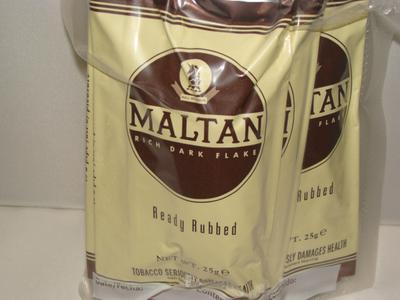 A lovely medium strength mixture, easy to light and to keep going, not a hint of bite. This reminds me of the aftertaste of a good dark beer or porter; slightly but pleasantly bitter and a hint of malt. In meers, I also got a hint of cedar, but not in the briars or the cob. A relaxing morning or late evening smoke.

Age When Smoked: just in from the vendor

Purchased From: James Fox of Dublin

I tried this tobacco because I had heard it was a sweet tobacco and easy to smoke. It smells nice when opened and was rather tasty for the first half of the bowl. As it progressed it got very strong and somewhat overwhelming. I would certainly recommend it but for me it's too strong. I enjoy Squadron Leader and Fox's Celtic Mixture. I also really like Condor Blended but that is not available in the south of Ireland.

I recently sold some pouches of this blend on my website and when the purchaser discovered that I had never smoked this Irish rubbed out flake, he told me to keep one of the pouches for myself. Thanks again to that gentleman and I envy him; he purchased some great tobacco!

My 25g pouch had been sealed for several years. It says "Maltan Rich Dark Flake" and "Ready Rubbed" on the front. And that is exactly what I got when I opened the pouch. The immediate smell that hit my nostrils was a combination of licorice and spice. That let me know the leaf was topped with something, and frankly, the smell was not really pleasant. I loaded up anyway because the tobacco itself did look inviting (Deeply dark and rich). The spicy taste overwhelmed my palate the first few puffs but then settled down into what was a delightful and heady smoke.

Maltan Ready Rubbed is strong, but not overwhelming. It does not bite and burned evenly down to the bottom of the bowl. Yes, it fanned its gil plates from time to time, but then, I enjoy strong tobacco. Yes, similar in taste presentation to St. Bruno Flake, but less "perfumed," and every bit as strong in the nicotine department.

I really enjoyed smoking a couple of back to back bowls and will miss smoking this blend when my pouch runs out.

Readily available in Ireland and from online stockists, this pleasant and mild over the counter tobacco deserves wider recognition.

Nuff said really. Make the effort and get yourself some. James Fox has a website which sells this, Velvan Plug and Condor Bar.

I must preface my review of this tobacco by stating that I first tried it when traveling in Ireland where I purchased it by the pouch or tin in little tobacco shops. It was an extremely pleasant and memorable trip, and I have associated the taste and aroma of Maltan ever since with those nostalgic memories. In the States we would probably classify this blend as a drugstore tobacco except for the fact that you will never find anything like this in a U.S. drugstore. The tobacco itself is a fine, chopped ribbon cut; the pouch says ready rubbed. The colors range from light to dark browns. The pouch aroma is of some exotic, oriental perfume, unique but reminiscent of other scented English flakes. It reminds me of Condor Original, but the smoke is not as strong; it does not upset my stomach or give me the hiccups. The flavor of the smoke is a combination of strong, English flake tobacco with an oriental, perfumey top dressing. I devote a very small, full bent Peterson system, P-lip No. 317 exclusively to this tobacco because, as with many scented English flakes, you cannot smoke anything else but that one tobacco in any given pipe. I do the same with St. Bruno Flake and Condor Original. While the tobacco flavor and scented flavor are very strong, the smoke itself is mild with absolutely no bite throughout the entire bowl. Towards the bottom of the bowl, the taste becomes more concentrated, similar in intensity to Condor Original, and I strongly suggest you have cup of coffee handy to clear the palate regularly. I smoke about one or two bowls of this a week. It is difficult to find, but a friend in Northern Ireland put me on to a vendor, Martin McGahey, so that I can keep a stock on hand. If you do not like English scented flakes, you will probably loathe this tobacco, and even if you do, this tobacco may take some getting used to. It is not for everyone, and I cannot imagine it as an all day smoke. I usually follow a bowl of Maltan with a bowl of Condor Original, and that takes care of my exotic cravings for a day or two. I heartily recommend this tobacco to those who seek adventure in pipe smoking. Paddy.

A friend of mine recently sent me a pouch of Maltan, which I had only tried once previously, several years ago. I will not belabor the various pros and cons of heavily scented English (or in this case Irish) tobaccos; suffice it to say if you fancy the liberally topped Gawith offerings you will likely enjoy Maltan. It is strong and straightforward and does not suffer relights well. It is not unlike Condor, which, due to being much more easy to obtain, is the tobacco I reach for when the urge for a rabidly floral offering is upon me. If interested, (and you can find it), give it a try. As for me, I will smoke my remainder sparingly and gratefully.

At first glance I thought this was a Condor rip off but closer analysis reveals some mighty big differences and they were big enough to convince me to keep this one in my rotation along with Condor. They are not one and the same but I'm pretty sure that if you like Condor you will probably like Maltan Ready Rubbed as well. The floral notes are very similar in both but Maltan has a honey sweetness to it that just makes for a mighty fine, refreshing smoke. Great nicotine content and high quality tobacco make this an absolute bell ringer for me, I treat it as my morning smoke accompanied by a cup of joe. It only comes in 25 gram pouches and can be a bit pricey to import here to the States but it's worth it in my opinion.

This seems to get mixed reception on this site, especially regarding the flavouring; it just proves how subjective this hobby of ours is! Me, I actually find this to be pretty mild in most areas. Not at all 'flat' but just slightly subdued in comparison to other peoples opinions.

Opening the pouch reveals quite a well rubbed mixture, there's no flake chunks, think St. Bruno ready rubbed. Unlike others state I don't notice much aroma from the pouch, I can't detect much of a topping or casing.

After a few puffs one word jumps to mind: smooth. Like the aroma, I struggle to detect much extra flavouring. Am I smoking the same blend as some of the other folks on here?! The smoke seems very relaxing, there's no bite and it's of a cool temperature.

I find the nicotine about mild to medium. It needs a large puff to get much recognition. I actually enjoy the level of nicotine in this as I don't like stronger things such as the Gawith twists!

I don't agree with what the description says about the burn rate. I find it quite quick and I don't think many of the heavy puffers out there would be too amused.

This is a good enough smoke for every now and again but I couldn't have it in my rotation: after a few bowls it just seems too laborious.

Two stars from me.

Update: changed my mind on this medium-dark and highly flavored VA, it is superb. Dark, rich and sweet. No taste of "dark fired smokiness" and not really like a Lakeland either, though it shares some aspects (floral casing and ultra smooth on the tongue with good vit. N). Only works in small bowls. Of course, at these tax inflated prices, no one can afford to put it in a large bowl anyway. You may as well smoke premium cigars (though they might not taste as good).

Floral topping is refreshing not cloying. A crying shame Scan Tobak doesn't want to export this beyond Ireland. One of the best of its kind.

Similar Blends: Not like a Lakeland at all, but if pushed, it's like a darker, richer Erinmore..

This is OTC tobacco, Irish style. Do you like a good stout at the end of a hard work day? an Ale? a Porter? Boy, have I got the tobacco for you. You know that lovely Malty goodness you get in the aforementioned beer? That's exactly what you get from this tobacco, its called "Maltan" for a reason..... To be fair, the first few times I smoked this, my nose burned off me, it's not the most easily accessible tobacco especially using the breathe method, a small pipe and soft cadence are needed to get the most of this tobacco and, like a good room temperature Ale it just grows on you and pretty soon you have a stout... Stout by name, stout by nature. A fine tobacco

As I always like to say something positive about the tobaccos I have tried, let me say at the outset that this looks like tobacco!!! Apart from that this is easily the most awful blend I have smoked in over 30 years of pipesmoking - YEUGH!!! Breaking the seal on a new pack is always a moment of anticipation as this is when the tobacco might reveal the delights that lie ahead.In the case of Malton the stench that hit me can only be described as nauseating - an undertone of fruit, but above all an overwhelming pong of perfumed soap mixed with disinfectant. the fruity bit reminded me of Erinmore - but this does a disservice to Erinmore which I actually like - Malton is in a different league of awfulness. Anyway I thought the taste can't be as bad as this - boy oh boy was I wrong! It tastes exactly as it smells, perfumed soap and disinfectant so strong that I was almost sick. The room aroma is exactly the same, at least this blend is consistant!! After struggling with great bravery for about 15 minutes I had to set the pipe aside, because the inside of my mouth tasted like the bowels of some vile and polluting chemical vat. After 30 minutes the taste was still there only now it had taken on a bitter metallic character. I just couln't face any more of it and I have thrown the pack away - I wouldn't even consider passing it on to anyone else - I might loose a friend for life! Another thing I think I have destroyed a good pipe forever (a silver banded "Mycroft", from Peterson's Return of Sherlock Holmes range.)It is so infected with this witches brew that I don't think it will ever smoke sweet again. I never, ever want to see this tobacco again in my life AARGH !!!

I tried several times to like this tobacco. Maybe it was the tin. Unfortunately, I found this tobacco to be unsmokeable. I'm hoping that the pouch version ages better than this tin.